Have I mentioned that I'm married to an amazing artist? I am. I like to think I'm his muse but really I'm just riding his coattails. I fell in love with one of his paintings before I fell in love with him. I asked my friend John, "Who did this painting? I love it!" and he said "That guy." and pointed to Erik on the stage of the (first) epicenter shouting poetry into the microphone.

Fast forward 12 years and one of those poems has taken on a life of it's own. In that time, Erik did other things like go to graduate school, get married (to me!), have a couple jobs and a couple kids, but steadily, he's also been working on this major project - making an animated short film. It's called Ballad of Sinister and it's a beautifully tragic story of a sad soul who had the unfortunate luck of being born a freak.

I can't tell you how many times I've heard the poem (it's about 15 minutes long) because snippets of it are constantly being shouted from his computer. Our walls in the computer room are covered in concept art - all sorts of freaks, goblins, a medieval village, and a very strange land. Working on this movie has been his hobby and it's exciting to see that after all these years, it's really starting to come together. Other people are now helping out - actors lending their voices, a composer writing the score, and animators working on the characters. You know you have something good going on when other people are offering to help.

But I can't say too much. It's still a TOP SECRET project. Hopefully though, if things keep coming together, you'll hear about it in a couple years. Remember where you heard it first. 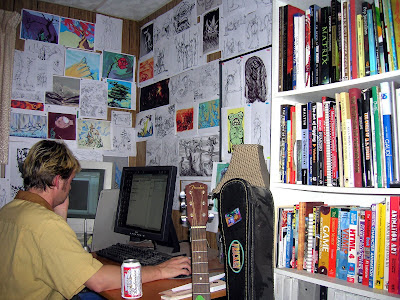