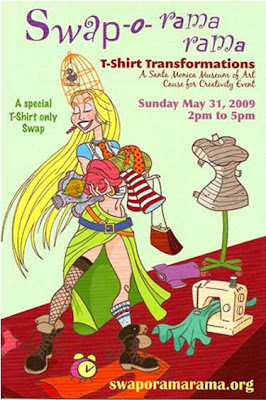 Living in L.A. and looking for something to do this Sunday? You should stop by the Santa Monica Museum of Art from 2-5 and participate in the Swap-o-rama-rama T-Shirt Transformations! Bring a bag of t-shirts and admission is free for members of the museum, non-members pay $5 or $10 without a bag of shirts. You'll be able to take your pick from the shirts collected and a team of designers (myself included) will help you transform those shirts into one-of-a-kind creations. In addition to my applique station, there will be tote making, plushie creating, silk-screening and general alteration. Come on out and recycle with style!
Posted by KB at 8:39 AM 1 comments

The Patchwork Indie Arts and Crafts Festival was this past Saturday. This was my 3rd time participating in this show and as always, it was awesome. 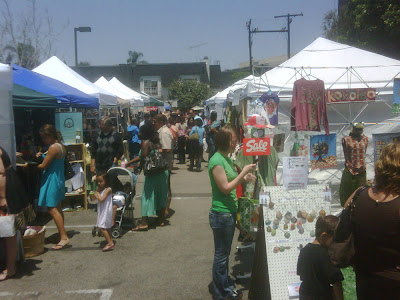 My booth was smack dab at the entrance to the Harvey's lot. 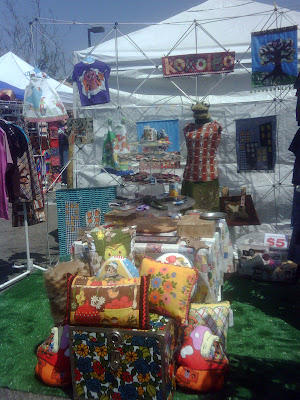 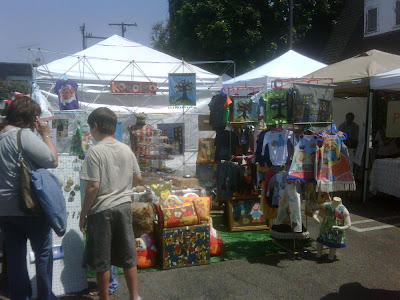 I have a tent, but I never use it. I like the way my stuff looks all out in the open. Consequently though, I have to endure the blazing sun all day. Sunscreen + water + sunglasses are a must. I forgot my sunglasses in the car but thankfully my switchboards/Flickr/Facebook/Twitter/craft show friend Shari watched my booth while I retrieved them. 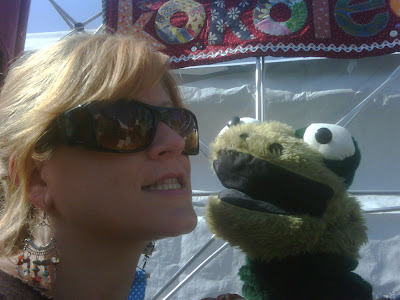 Thanks Shari! It was a nice afternoon spent catching up with fellow crafters, seeing customers from former shows, meeting new people, and sending lots of kokoleos off into the O.C. I debuted a bunch of new eyeglass lens necklaces: 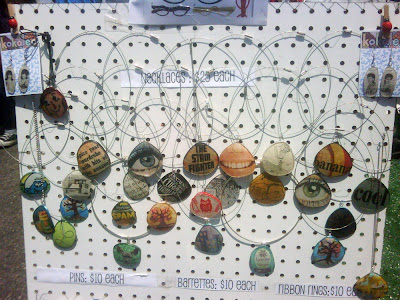 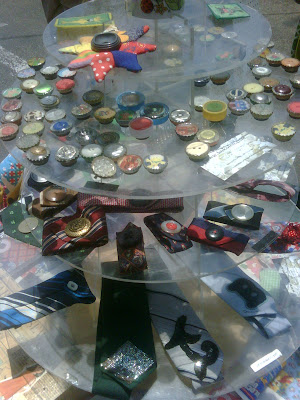 As part of what I called my "Recession Special" I reduced all bags and grownup clothes to 50% off and tossed a bunch of stuff in a $5 box. I know how much I like a bargains so I like to give some to my customers as well. It helps to get rid of old inventory and all those low dollar amounts add up. Speaking of bargains, I got these cool button rings from Tacos n Eggrolls: 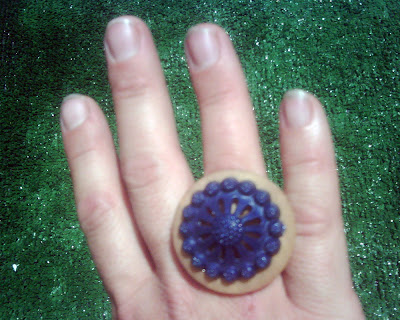 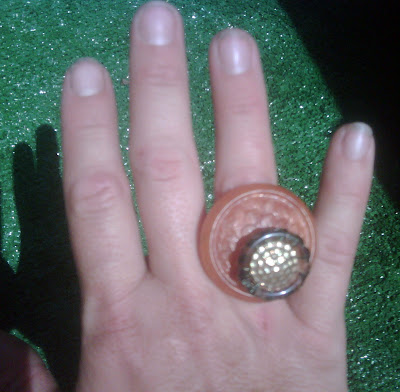 $9 for both! A steal! I also scored a cool crafty handgun t-shirt from fellow vendor Steph of Hearts and Laserbeams. I won it last week simply by leaving a comment on her blog. I also won a Yelp! tote at the Yelp! booth for signing up for their mailing list and pulling out a winning Jenga block. (I didn't tell them that I sign up for their mailing list every time I see them at an event in hopes of winning a tote. I guess I can stop now.)

I can't make it to Maker Faire, but I've got these two tickets. Who wants them? The first person who replies and says he or she wants them, gets them. Free! (worth $50) But you can't sell them. You have to go. 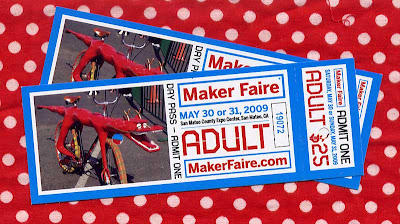 Maker Faire is the world's largest DIY Festival, held at the San Mateo County Expo Center. These tickets are good for May 30 or 31. Unfortunately I've never been able to make it to one of their events, except for the mini version that was part of Felt Club one year. I've only ever heard great things though, so you should go. You'll see hundreds of people who make things making things on the spot, exhibiting the things they make, and teaching others how to make things, plus hundreds of did-it-themselves artists selling their goods. That sounds like my version of crafty heaven. It's sure to blow your mind.

So, any takers for 2 free tickets to Maker Faire?
Posted by KB at 9:11 PM 2 comments

What are you doing this Sunday from 11-5? If you're in the L.A./O.C. area, come check out PATCHWORK Indie Arts and Crafts Festival in Santa Ana. 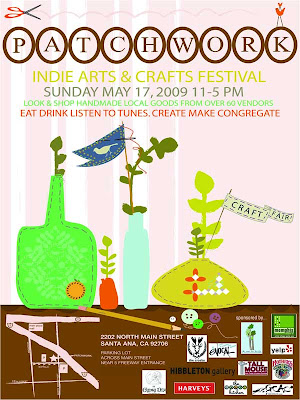 Shop for one-of-a-kind never-seen-befores! Make your own buttons! Listen to live music! Eat! Support independent businesses and the the handmade community! Have fun!
Posted by KB at 12:39 PM 0 comments

I got this giaganic glass container for $2 at a yard sale last week. I brought it home, cleaned it out, and filled it with my buttons which had previously been kept in various tins and boxes around my studio.

It's hard to see how big it is from that picture. Here are some more with McKenna beside it to show the scale.

It makes searching for buttons a little easier since I can see through the sides. Plus, I like plunging my hands into it and stirring all the buttons around and around. Mmmm, button soup.
Posted by KB at 8:42 PM 0 comments

I made a few things for McKenna this week, like this Powerpuff Girls shirt: 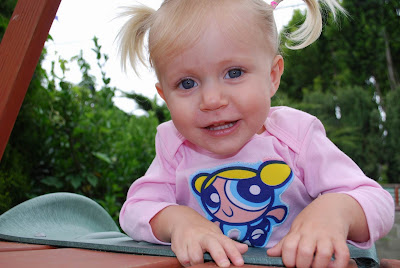 She and Bubbles kind of look alike with their big blue eyes and pigtails (though the pigtails never last long before she pulls them out). McKenna is fearless like a Powerpuff Girl too, and hard to catch when she's zooming all around. 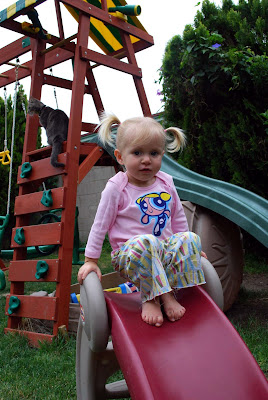 I also made her this dress, which is my new favorite creation: 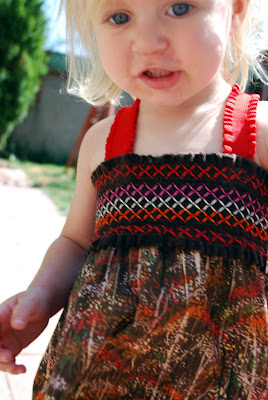 It's composed of parts I got at various estate sales over the years and then set aside. This is why I don't get rid of stuff - because one day the right project comes along and all those pieces I was saving come together perfectly. 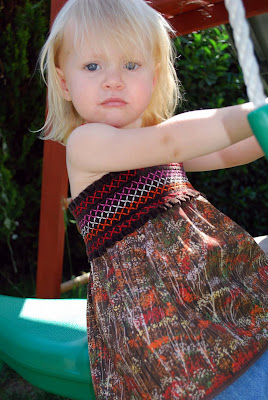 After I put it on her, she said, "Tankoo mommy" and gave me a kiss. Awwwww. 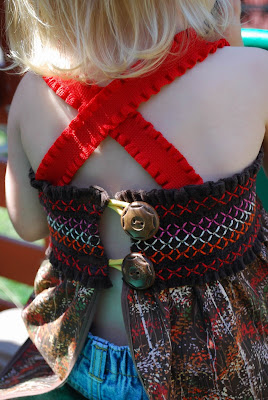 With the little elastic I had left, I made her this corsage: 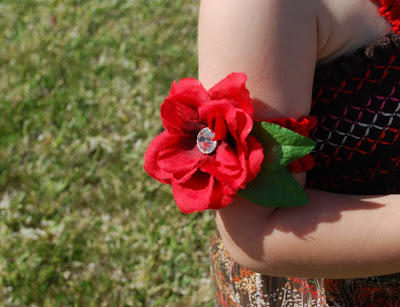 Which she quickly yanked off and threw in the bushes. Oh well, you win some, you lose some.
Posted by KB at 2:12 PM 1 comments