Thrift Thursday was actually started by Carrie Sommer of Sommer Designs. On her blog she often posts photos and stories of her flea market finds and thrift store scores. She even started a Flickr group called Thrift Thursday so others could share their treasures as well. Here's my latest entry to the photo pool: 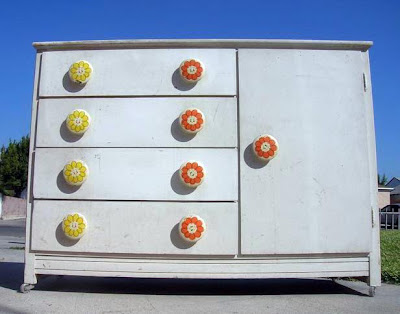 Check out the knobs on that thing! I swear it just dropped from the Heavens and landed right in front of me. And it was free!

Last Friday Sage and McKenna and I went to our friends Lauren and Ava's house in Silverlake for a playdate. When I couldn't find a parking space in front of their apartment building, I had to drive around the block to try again. In the process of doing this, I spotted this dresser just hanging out on the sidewalk with some other odd junk. I slowed down a bit but kept driving. I told myself, if it was still there after our playdate, then it was meant to be mine.

Fast forward two hours. I drove down the same street on our way home and the dresser was still there waiting for me. I pulled up beside it and got out to give it a closer look. The drawers slid like buttah (wonky drawers are a deal-breaker) and the side cabinet opened to reveal a fully functioning pull-out clothing rack. Sweet! Other plusses included the fact that it was on wheels and that it was made of real wood, not that pressed fiberboard crap. The minuses were minor - it was a little dusty, there was an odd assortment of broken light switches in one drawer, and there were random black smudges here and there. I quickly did a pro/con analysis in my head and decided the pros won out. The only problem then was how to get it in my car.

That's when the Heavens dropped down my Fairy Grandfather. As I was standing there looking back and forth between the dresser and the trunk of my station wagon, an older man who was standing in his garage across the street asked me if I needed help. He walked over and pulled a tape measure out of his pocket (how many people carry a tape measure in their pocket?) and measured both the dresser and my trunk. We determined that it would fit, but it would have to stick out a few inches. He helped me hoist it in and even crawled under my car to hook up a bungee cord (that I luckily had in the trunk) and secure the trunk door tight against the dresser. I thanked him profusely and was on my way.

Next problem - getting home. Silverlake is a good 10 miles from North Hollywood, with the Hollywood Hills between them. Oh, and it was rush hour. There was no way I was going to get on the freeway. Instead, I drove 25 mph with my hazards on through Griffith Park. Amazingly, there was no one behind me the entire time. The ride through Burbank was equally as easy. It took me twice as long as it usually does to get home, but all my precious cargo arrived safely.

Okay, so apparently I’m a scavenger. But seriously, when the Heavens drop the perfect dresser in your path and a Fairy Grandfather to help you load it in your car, you know it was meant to be. 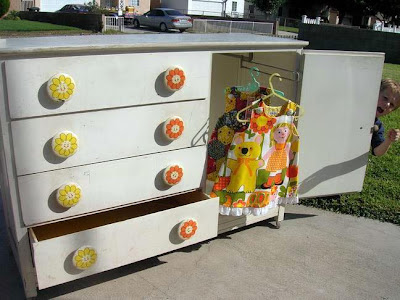 Love the dresser. I have so many curbside treasures in my home that I feel were meant to be. Those drawer knobs are the best!

Ooooo, I'm jealous! What a great find. Love that little side door.

Thanks for joining Thrift Thursday, but forget that...oh my God...that dresser! Those knobs! How fantastic! Nice score!