Wednesday's theme is World Wide Wednesday, where I'll talk about whatever is currently catching my attention on the world wide web.

Recently, while checking out my friend Adrien's blog Amblus, I ran across a link to her friend Noah's blog Skull-A-Day. Noah has vowed to create (or find) a new skull image every day for an entire year and post them on his blog. Sometimes he goes to great lengths to create work of skull art, 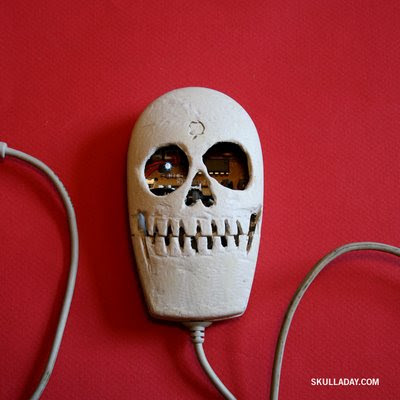 and sometimes it just happens before him like in the left over oil and vinegar residue from his dinner. 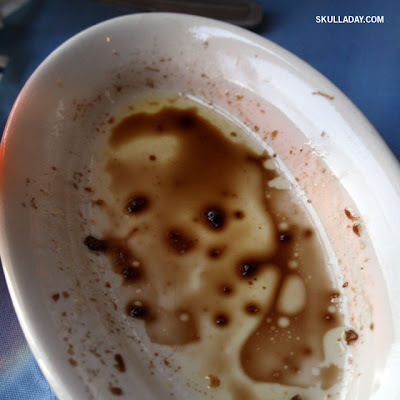 You can even join him by tagging your own skully photos "skulladay" and posting them on Flickr. Everyone! Bring out your dead! For a symbol typically reserved to arouse fear, denote death, or inspire evil, it's impressive to see skulls presented in surprisingly beautiful ways.

I wonder why so many people are drawn to skulls right now? Sage sure is. Growing up, I remember them being reserved for pirate flags and Hell's Angels' jackets and cartoon poison bottles. For the last few years they've been popping up everywhere - on clothes, shoes, jewelry, toys, graffiti, etc. Why are so many of us suddenly wild about skulls? They're all over the independent designer scene too - I've seen them at craft shows on purses and aprons and baby clothes. Adrien, who I mentioned above, sells these cool skull earrings (a pair of which I'm lucky enough to own). And my skully shouldered tee-shirts have been some of my best sellers for both kids and grownups.

I have a theory. I don't think it's just a coincidence that the skull trend has emerged since the threat of terrorism and the war in Iraq have become aspects of our modern lives. I don't think it's a conscious decision: I fear death so I will make the symbol of it familiar, cute even, and display it proudly. But I think there's a link. Every day we're bombarded with news about bombings and body counts and yet we go on as if everything is fine. Still, the threat and horror of death looms, if not in our own cushy surroundings, then out there, happening to other people. It's nothing new, I suppose. We all die someday and bad things have been happening to good people since the dawn of time, but in the last few years it seems the issue has been forced upon us. PEOPLE ARE DYING. What are we going to do about it?


Um, I don't know how to end this post now. I have no answers. I promise tomorrow's post won't be such a downer. For now, go check out Skull-A-Day. That should cheer you up.
Posted by KB at 9:49 AM