A few years ago at a church bazaar in North Hollywood, I got McKenna this bunny: 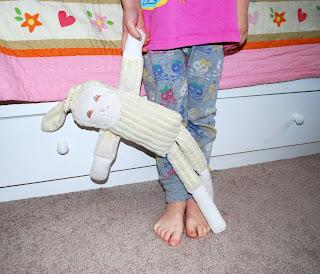 He's a little dingy now and his hand-embroidered eyes and whiskers have snagged but he's still one of her favorite friends. I bought him for six dollars. Six dollars! Being used to indie craft markets where prices tend to reflect the amount of time and effort put into a project, I couldn't believe the price tag said $6.00. That's Made in China sweatshop prices! I've made many a stuffed monster in my day and I would be a fool to sell something that took me 2+ hours to make for only $6.00. Who works for 3 dollars an hour?  I didn't argue though, but I did ask the old lady at the checkout how she could sell her handcrafted item so cheaply. She said, "Oh honey, it just makes me happy to know you want it. I don't really care about the money." And the award for sweetest old lady in the world... goes to her.

Inspired by that bunny, I made my own version. And in honor of that generous crafty grandma I included a pattern for you to make your own too.

These are the pieces you'll need: 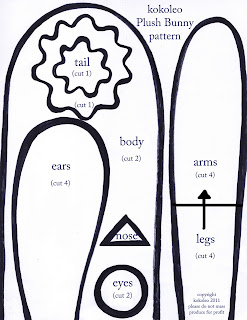 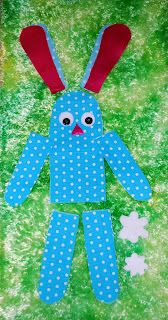 Cut 2 bodies, 4 ears, 4 arms, 4 legs, 2 tails, 2 eyeballs, and one nose. First, sew on the tail, eyeballs, nose and mouth using a zig-zag or satin stitch on your machine. Next, sew on button pupils. 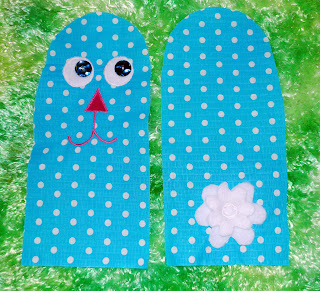 Stitch together the arms and legs and (not pictured) ears. 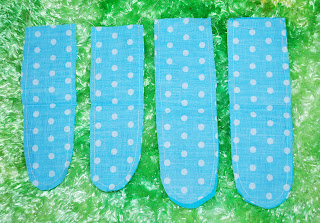 Turn them right-side-out and stuff the extremities half-way. 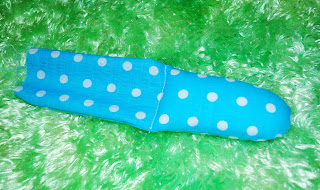 Straight-stitch a line across the middle and continue stuffing, leaving a half an inch at the end. Rather than stuffing the ears, simply turn them right-side out and iron flat. 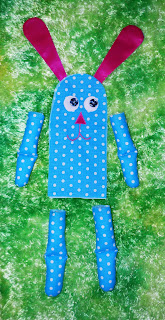 Next, stitch all extremities to the front of your bunny body. 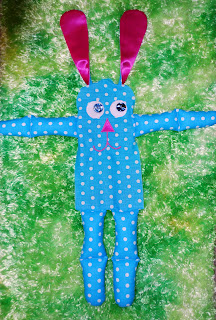 Fold the ears and arms inward and place the back of your body on top, tail-side in. Starting at the top of the head, stitch the body parts together down the edge of one side. The other side will be a bit trickier since you have the ears and arms crammed in. Once you have the top and both side stitched, turn it right-side out through the bottom. It should look like this: 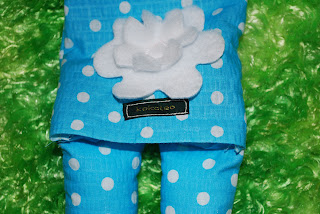 Now fold the bottom in and carefully hand-stitch closed. Ta-da! 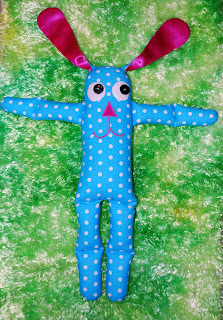 Finally, give it some whiskers: 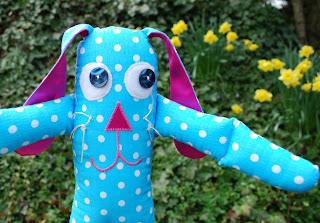 (psst... next week I'll show you how to make a patchwork carrot. These bunnies get hungry!)
Posted by KB at 12:02 PM

Thanks for sharing this - it's by far the most "professional-looking" bunny I've seen! It actually inspires me to try it for myself!

So cute! I've been working on an idea for Easter gifts for the kiddos in the family and this is perfect for all ages and will work for boys and girls. Can't wait to get started.
Thanks!
Jan

Thanks! If you make one, make sure to submit it to the Craft: Flickr pool and reference this tutorial. I'd love to see them!

You have a very good blog that the main thing a lot of interesting and useful! erectile dysfunction Read a useful article about tramadol tramadol

This is good site to spent time on. allergy Read a useful article about tramadol tramadol

eToro is the #1 forex trading platform for new and professional traders.