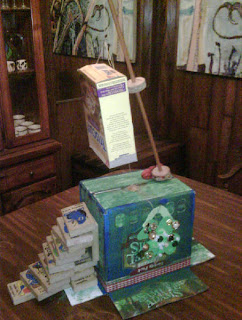 He painted a Sam Adams box to look like a leprechaun hat, built stairs out of blocks, and with Tinker Toys and string, suspended an empty Triscuit box in the air to fall on any leprechaun trying to steal a gold coin. In the morning, we woke to find this: 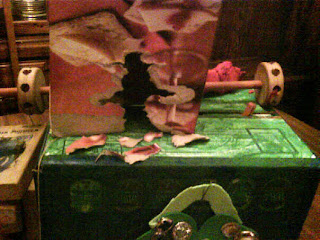 The leprechaun had busted out of that box and made off with the coin, tricky devil. Sage vowed that next year he'd build a stronger trap.

One day a few months ago Sage was eyeing an old baby wipes box that McKenna kept little toys in and said, "I have an idea! This would make a good leprechaun trap! Can I have it?" He showed us how the slit in the top would make a perfect trap door that he could cover with something... gold coins!... to lure a leprechaun in and CRASH! he'd fall inside.

Yesterday, he made it: 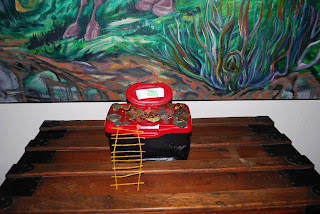 If you were a leprechaun wouldn't you be intrigued enough to check it out? There's a ladder and everything, and a sign that says, "take one!" Well, while we were sleeping a leprechaun did! 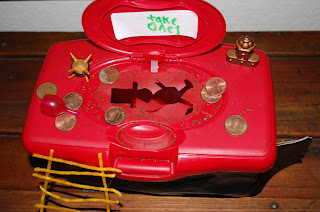 And, it seems, as he was gathering up all the big coins he crashed through just like Sage said he would, leaving behind the outline of his little leprechaun body (it's so weird how they do that.) But! That wee greenie outsmarted us again! He cut a door out of the side and escaped... 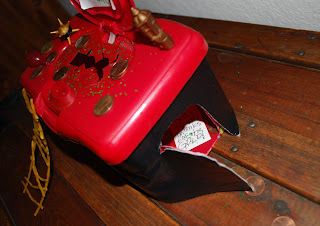 leaving only a trail of pennies and this note behind: 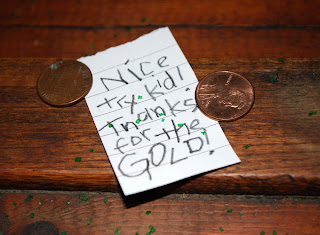 HYSTERICAL!! Thanks for sharing and brightening my day :).

This is SO adorable!!

KB, you are such a good Mom! i am so proud of you...hope to see you in april, will let you know soon...love annette

eToro is the ultimate forex trading platform for rookie and established traders.