An update on that resolution. . .

Last week Erik sent me on an errand to get lettuce and asked me to pick up some lightbulbs (a special size we need for over our bathroom mirror that they sometimes have at the 99¢ Only store) and I told him, "But that's a thing. I can't buy things this month." to which he replied, "Oh come on! You can buy one freaking lightbulb!" I was happy when I discovered they were out of those lightbulbs. For now, we'll just have to pee in the dark.

But today, I caved. I bought a box of band-aids. They were the big kind that we never seem to have when we need them and they were at the 99¢ Only store and the good stuff at that store is always gone the next time you go there to get it. Have I blogged about how awesome the 99¢ Only stores are on the west coast? Some day I will.

I also bought a giant box of Polyfil at JoAnn's this weekend, which technically isn't a thing for me, but a necessity for my business. I can't very well tell my commission customers that while their pillow is all stitched together, they'll have to wait until next month to get it stuffed because I ran out of stuffing and promised myself I wouldn't buy any thing this month. Technically though, they bought the stuffing. I'm just the middlewoman.

So I'm almost two weeks in to the month without new things and while I barely noticed it last week, this week I started to feel it - not so much the lack of things, but the urge to shop. It doesn't help that there's a Target less than a mile away from our house beckoning. . . Come to me! I have cute affordable clothes and things on sale and things for your kids and home decor and shoes and cosmetics and things that smell nice!

So far, I've resisted. Luckily I'm swamped with commissions right now and have good reasons to stay home. And, since I'm not out being all spendy, I have money in my wallet just sitting there. It feels nice. I want to spend it.

But I'm not spending money this month, I'm spending time - on the kids, on kokoleo, on the house, and on the yard - all the important things that require time and love and work, not things.
Things make clutter, and clutter, like weeds, overshadows the good stuff. I've been tossing lots of clutter this month, and this weekend Sage and I dug up our weed-choked garden and planted sunflowers. I'm sooo ready for Spring.

Another thing that feels nice? Erik found a job. Yes, in this godforsaken economy, there are still some jobs out there. And he got one! A good one too. So you don't need to worry about us anymore (in case you were). Unfortunately though, I could rattle off 10 or more names of friends who've lost their jobs and haven't been so lucky. I hope things turn around for everyone soon.

That was kind of a depressing note to end on, so I'm adding this. 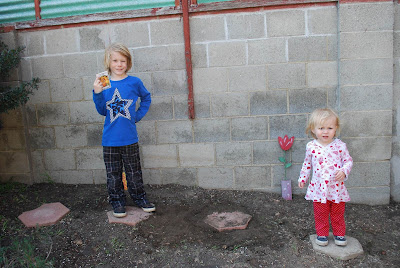 In a few months I hope to show you this space again, complete with sunflowers.
Posted by KB at 9:47 PM

Hooray! Congrats to Erik on the job.
I am trying to spend less too, food and other things. Who knew all our condiments would run out in the same week. And then they had a big sale on bedding for the chickens, and after a long winter the coop needs it BAD. Better luck next month I guess.

and such a sweet picture!

Amen! We are in the same boat-money is tight. I was so proud of myself last week for walking into a shoe store, spending 45 minutes and pretending I was cute and sexy in all the heels (that hurt)and walking out wearing my 15 year old worn, red Chuck Taylors and not spending a penny.