On Monday, I found this thing on the floor in the middle of the computer room. It looked liked a crayon minus it's wrapper, but on closer inspection, it didn't look like that at all. Was it a stick? A petrified hairball? an old green bean? I picked it up and broke it in half to figure out what it was. And that's when I dropped it and screamed. The inside looked like sushi. The outside looked like a headless sardine.

I made Erik pick it up and tell me what it was. He stared at it and couldn't figure it out either. It's a very odd experience to hold something in your hand and have no clue as to what you're looking at. We finally deduced that it was an alien tentacle and threw it away.

Fast forward two days. . . Erik was getting ready to go to work (this was his last week) and he went to reach for his bag and found this: 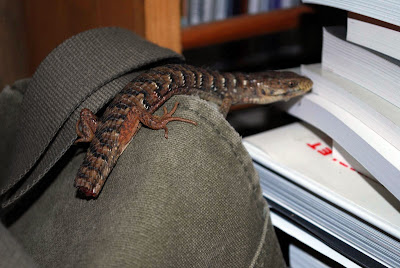 So that thing we found two days earlier that I picked up and broke in half with my bare hands was it's TAIL! Ewwww! I guess Bella brought it in? Or it crawled through the doggie door? I've heard that lizards lose their tail when they're scared but I've never actually seen it, and certainly NOT the way I saw it all up close and personal. Gross!

So right there in our computer room we had a little showdown with the lizard. He stood there on Erik's bag staring at us while we frantically came up with ways to catch him. We may be pet lovers but we are not lizard people, especially when they come in uninvited and leave their tails lying around. McKenna could have picked it up and put it in her mouth! Yuck!

Are you still reading this? Do you need a barf bag?

Wild lizards are hard to catch. Erik tried, but he ran behind the filing cabinet. So Erik went to work and left me all alone with the lizard. Creeepy.

Hours later, after I had almost forgotten about it, I walked into my studio and found him slowly walking across the floor.

Covered in dog hair, haha. He couldn't fool me though, I knew it was the lizard. I opened the door and went to put the camera away and when I came back he was gone. I figured he saw the great outdoors and made a run for it.

Wrong! A few hours later I almost stepped on him! He hadn't left my studio at all but was hanging out under my sewing machines. Long story short - I shooed him out the door. Broomsticks and squealing were involved. This time I followed him all the way across the yard. 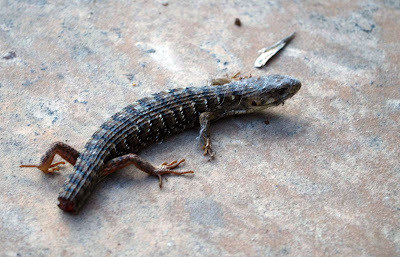 And the next day he came back! Ack! I found him hanging out by the door, inside my studio, sticking his tongue out at me as if to say, "Phhbblltt! I'm back!" I frantically trapped him in a container (much to the delight of McKenna, who thought my squealing was hilarious) and drove him to Petco where we learned he was an "alligator lizard," to which I said, "An Alligator!?" and then learned that no, just an "alligator lizard." They gave us some crickets to feed him and told us all the supplies we would need if we wanted to keep him, how much those supplies would cost, and how we'd have to feed him live crickets and mealworms every day.

Then we drove him to the park and let him go. See ya later Stumpy! 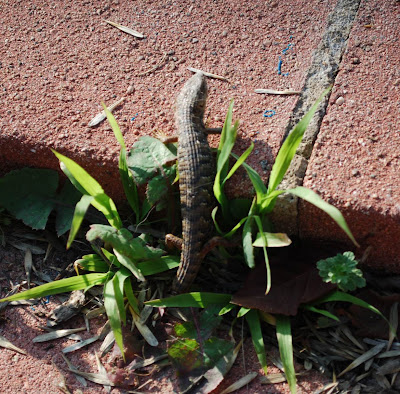 Wow I am so glad that think wasn't in my house. I like lizards but with its stumpy tail. (shudder)!!!

You should see when their tail first comes off. It flops around for about the next 15 to 20 minutes. Pretty interesting stuff. If you're interested I've got a Youtube video of one of my Tokay gecko's tails.

so gross! but i laughed so hard that you busted it in half (not funny, but funny!)

hi dudes. I'm actually into shoes and I have been searching for the sake of that singular brand. The prices as regards the boots were around 250 pounds on every page. But completely I found this locate selling them for half price. I exceptionally like those [url=http://www.shoesempire.com]prada sneakers[/url]. I will definetly order those. what can you say about it?

One approach also of acquiring free xbox
live codes is as simple as looking at a number of video
gaming review articles where on-line games are generally
getting reviewed. The best time to visit the Microsoft website is when there happens to be an event that
touches on gaming such as the launch of an entirely new game.
These occasions aren't common and only occur when sponsored by some other company.

Twitter is but one social site that may leverage the marketing methods of many web marketers, to gain success
in online business. So you send a tweet with a link
to your perk, and build an email list. In other words:
you don’t need every Tom, Dick and Harry to follow you on Twitter;
you need people who are in your niche, people who are interested in the product or service you are offering.


Here is my blog :: Epic Followers

Stretch marks are formed when fibroblasts are somehow
restricted and skin vitality is not ok. Later, the
skin will come into view smooth as lying down,
but the dimpling will appear when standing. Also, if you
are being treated by a physician for any type of medical
condition, it is important to let the office know.

This worked for the remaining 8 weeks (mainly because I never took the band-aids off long enough to go at it.
It does work, but I still treat myself to manicures to ensure that
my hands always look good. The old British maxim states
that ‘Knowing your enemy is battle half won’.

Look into my website - how to stop nail biting adults

Avoid prolong sitting or standing and avoid wearing tight undergarments are some of the hemorrhoid treatment
that you can also do. Natural ingredients such as witch hazel, stone
root, aloe vera and butchers broom may also be used.

As a result of this the root cause of hemorrhoids development
is being eliminated. First to provide relief and begin shrinking the hemorrhoids
you will want to start with sitz bath and witch hazel.

There was a lot of resistance from the public on the
effectiveness of this system but Japanese scientists who came up with
this idea were unperturbed.

Mortgage expenses also include appraisals and commissions paid.
Robert Shumake's mission is to inform the public about mortgage fraud and real estate scams and to provide tips on how to avoid being a victim. This all depends on where you are thinking of investing.

If you are among those People who need to invest their money in something tangible in Uganda Don.
One of the most important stipulations of the act is that an Estate Agent may
only receive commissions on transactions concluded during a period for which the Estate Agent is
in possession of a valid Fidelity Fund Certificate. Just use
the three principles you would for any business:
buy at a price you can afford; sell for more than you paid, and sell in a measurable time frame.


Here is my web site: Asunnot

Everything is very open with a really clear clarification of the challenges.
It was definitely informative. Your website is useful.
Thanks for sharing!

Want To Boost Your ClickBank Commissions And Traffic?