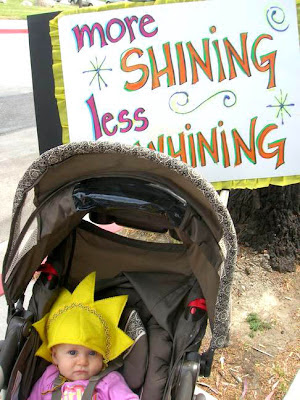 Last week, through my L.A. Church of Craft email newsletter I found that Cathy Murillo of Crafty Chica was holding a "Glitter Rally" outside the Ellen Studios at NBC. It seems Ellen has been dissing glitter on her show and Cathy wants to show her that a touch of sparkle in your life is a good thing. I figured if Cathy could fly in from Fresno, it was the least I could do to drive 10 minutes to the NBC studios in Burbank and join her. Even though it was her nap time, McKenna stayed awake and sparkled in this glittery felt hat I whipped up for her last night. 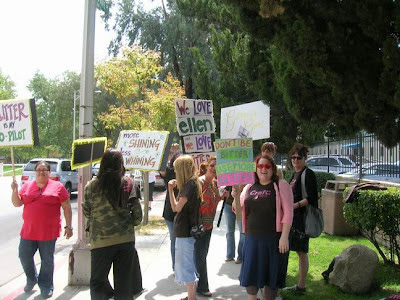 It was fun! While I was walking I met Stefanie (wearing an "I (heart) Glitter" sparkly hoodie) and we found our way to the Ellen studios. I saw Jenny and Cathy, and met Cathy the Crafty Chica in person, plus I also met my Flickr friend Erika of My Imaginary Boyfriend, Carla from Craft:, the host of Creative Juice Cathie Filian (I scored a bunch of crafty stuff at their studio sale last year), members of the L.A. Craft Mafia (I'm so joining), and lots of other cool crafty folk. 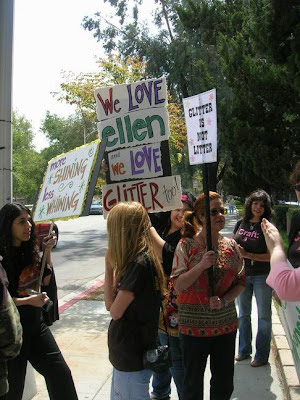 We carried glitterific signs and shouted silly chants like, "What do we want? Glitter!" and When do we want it? Now!" and "Glitter is not Litter!" among others. Some people honked. Most people looked at us like we were crazy. A cute guy from the show came out and filmed us, so we might even be on tomorrow's episode (April 9th). Look for me bouncing a sparkly headed baby around shouting my love for glitter. 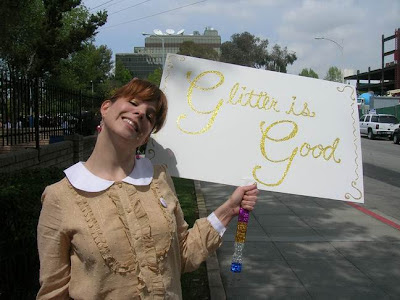 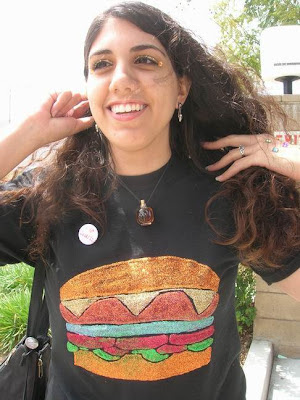 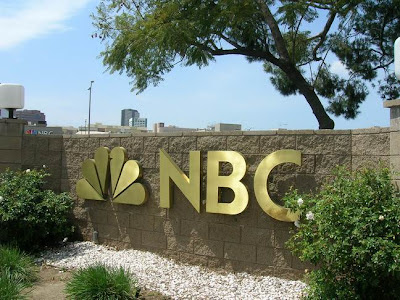 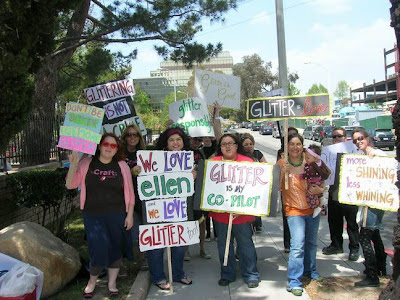 The funny thing is, I can't remember the last time I even used glitter. Still, I love the crafting community (and Ellen!) and thought it would be a fun way to spend the afternoon. Viva La Glitter!
Posted by KB at 7:41 PM

Stef (the one you walked with)
http://sweatersurgery.blogspot.com/
http://www.crafttvweekly.com/
(\__/)
(='.'=) This is Bunny. Copy and paste Bunny into your
(")_(") signature to help him gain world domination.

what a greeat time ,your b aby is so beautiful and made it all the more memorable! thank you for coming!!!

That was fun! Your little baby looked very cute, and just a little bit bored, lol! It was nice meeting you (I'm the girl with the cheeseburger.)

Hey lady :) Fun day, huh? You little girls hat was SO cute and Sparkly! Glad to meet you.

That looked like so much fun! McKenna looks adorable, as always.

Thanks everyone for the nice comments. It was nice meeting you all for a little impromptu performance art down a random street in Burbank. Let's do it again sometime!

What about "Babies love glitter too"! Your baby was the cutest! L.A. Craft Mafia rules!

Love the glitter rally! Too fun!