We attended Comic-Con in San Diego this weekend and man, it was crazy. Normally, I'm not into this kinda stuff - comic books, science fiction, gaming, etc. - but Erik's work was footing the bill as an educational experience so Sage and I decided to tag along. It turned out to be a blast! A super-crowded expo full of friendly costumed freaks. Here are a few of them: 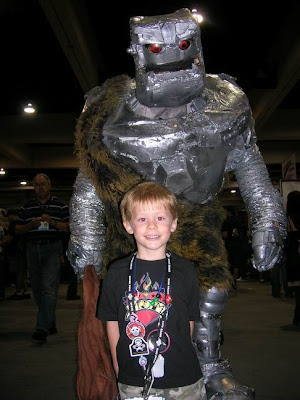 A robot caveman! We also saw our share of Spidermen, Supermen, Batmen, Star Warsians and even, my favorite - Muppets! 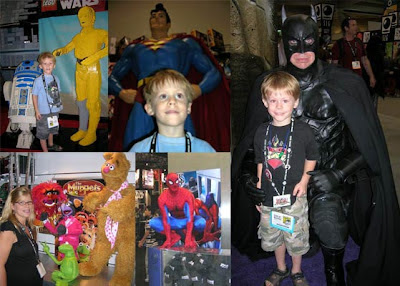 There were also plenty of Storm troopers. My favorite was this Elvis one: 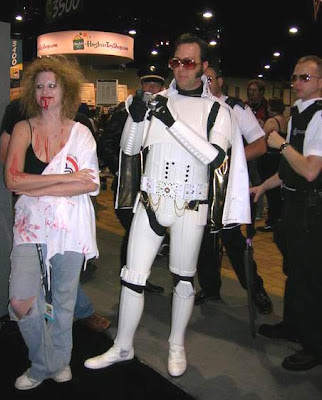 And we saw some famous people. Among them, Lou Ferrigno, Ron English, Andre 3000, and (not pictured) Ray Bradbury. 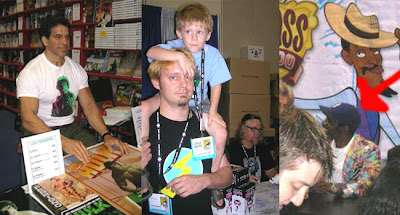 Sage wouldn't believe me that Lou Ferrigno was the Hulk. Right in front of him he yelled, 'That's not the Hulk, that's just a guy!" I had to rush Sage away after that. We didn't want to see him get angry.

Also, scattered among the vendors I ran into a few Felt Clubbers - Poketo, Fuzzy Balls Apparel, and these guys: 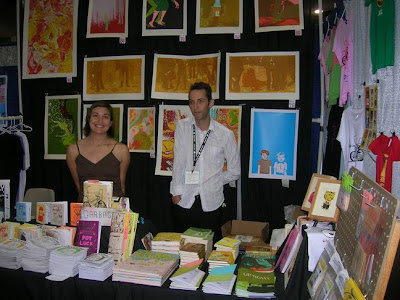 Funchicken, Steven Weissman, and Jordan Crane.
They all told me that they although Comic-Con was fun, they enjoyed working at Felt Club better. The Comic-Con crowd tends to gravitate toward mass produced pop culture, whereas Felt Club aficionados appreciate and celebrate the one-of-a-kinds. I'm not saying one is better than the other. . . oh wait, yes I am. I can't help it, I'm biased.

(edit: On further reflection, I've decided that assessment isn't fair. There were plenty of indie-artist booths scattered about the convention floor, many of whom had the difficult task of selling a story. Whereas crafters set up a display of various items from which customers can browse and choose, many of the booths at Comic-Con were peddling a lone character and its accompanying story, which, I bet, is harder to sell than a functional tote or fuzzy monster. My husband has an interesting take on this topic. You can read it on his blog here.)

So there it is, in a nutshell. We managed to collect a bunch of needless swag like stickers and buttons and enough temporary tattoos to cover Sage from head to toe. On Sunday we spent the day at LegoLand, but I'll save that for tomorrow's post.
Posted by KB at 9:27 AM

If you want to know more here it is
home business reviews
www.home-businessreviews.com

Good day, sun shines!
There have were times of hardship when I didn't know about opportunities of getting high yields on investments. I was a dump and downright stupid person.
I have never imagined that there weren't any need in large starting capital.
Nowadays, I'm happy and lucky , I begin take up real income.
It's all about how to select a proper companion who uses your money in a right way - that is incorporate it in real business, and shares the income with me.