What time is it? Adventure Time! And Halloween season too. Last year my kids went as Finn and Jake for Halloween. (you can read my Finn costume tutorial here and my Jake costume tutorial here.) I made their costumes because at the time, there weren't any officially licensed Adventure Time costumes available. Now there are some mass-produced Made in China-kinds available here and here. They even have Ice King and Princess Bubblegum costumes and a slutty Fiona costume too. Still, some prefer the one-of-a-kind variety. While searching the internet for Finn and Jake costumes last month, a woman found some photos of my kids in their costumes, discovered this blog and my kokoleo website, and wrote to ask if I would make the same costumes for her sons. Luckily, last Halloween I made some extra Finn hats and backpacks so I already had an adult-sized version available for her teenage son, but the Jake costume I had to make from scratch. And here it is: 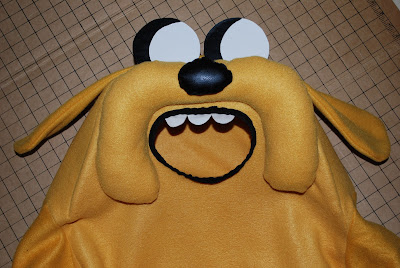 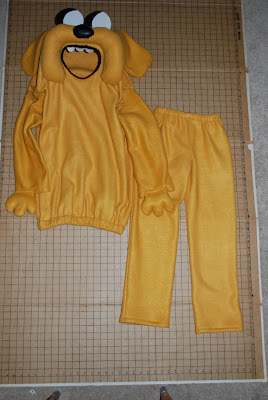 Her younger boy is 10 and small for his age, just like my boy who was nice enough to model it for me. 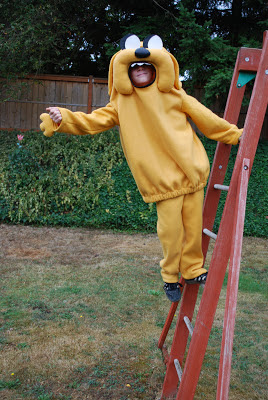 And here he is with his sister who can still fit in her costume from last year.  I think the yellow I chose for the bigger costume is closer to the actual color of Jake. 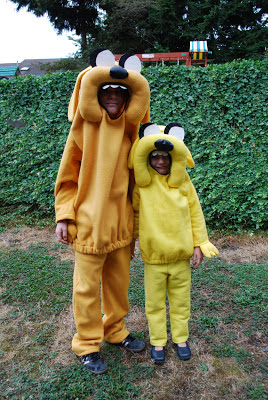 And here they are with our real-life doggie: 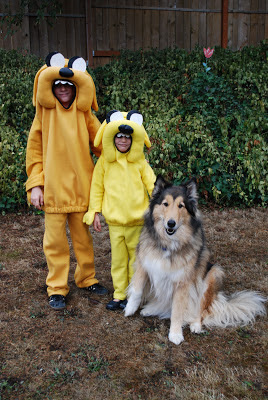 Do you think you could post instructions on making small shoe covers or booties and little mittens for the costume? Thanks it would help a lot! :D