A kokoleo kind of Regular Show

This year, my kids decided they wanted to be these guys for Halloween: 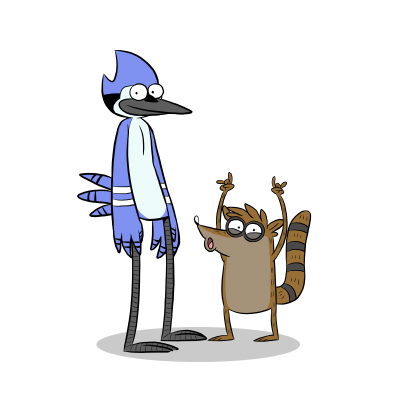 It's Rigby and Mordecai, from Regular Show on Cartoon Network, and most people have never heard of them. Just like Adventure Time (their costumes last year), it's one cartoon they enjoy watching together. It was quite the challenge though, and I only had 3 days to do it.  Fast forward forty dollars of fleece and fourteen hours of cutting and sewing and here's what I came up with. 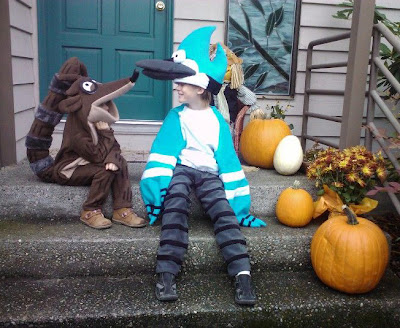 Here are a few pics of the process: 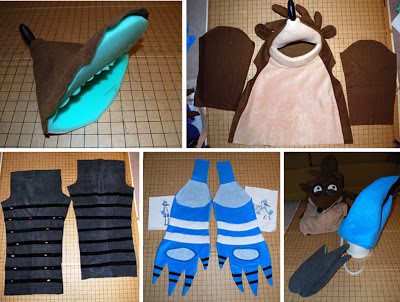 I would have written up a tutorial but I was manically making it up as I went along and not taking many pictures. I did discover what is destined to be my new favorite textile - FOAM! It makes everything all Muppety, I love it. The kids both remarked how soft and warm and comfy the costumes were and plan to wear the pants as pajamas after Halloween is over.

On Sunday, after a morning spent skipping church to sew the finishing touches on their costumes, we took them trick-or-treating at The Landing in Renton. Most people didn't know who they were but a few kids yelled out "Mordecai and Rigby!" and some of the hipper parents were impressed. A few asked "Where did you find those?" to which I replied that I made them and they looked at me in disbelief. 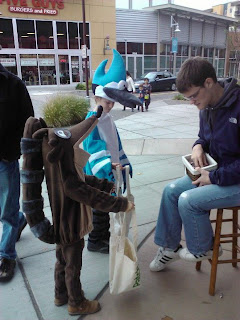 Still, most people had no clue who they were. One mom said, "Wile E. Coyote and an Angry Bird! How cute!" One little girl in a princess dress looked at McKenna in horror and started crying. That was funny. 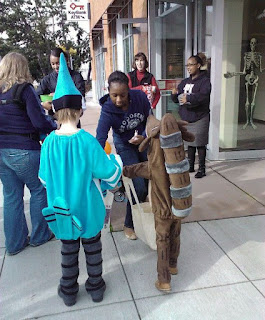 The best was the several different groups of teenagers who told them they were awesome. It's not every day a teenager tells a 5 and 10 year old that they're awesome. 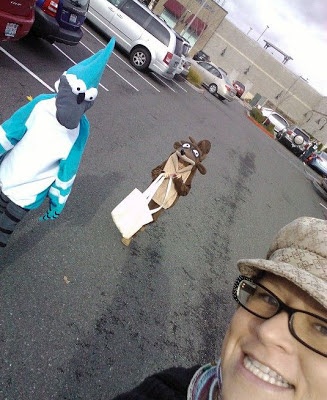 This may be the last year they want to do a bro/sis costume combo so I had to do it. 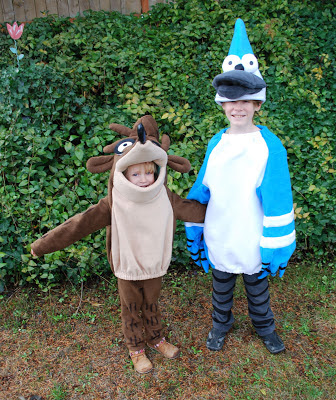 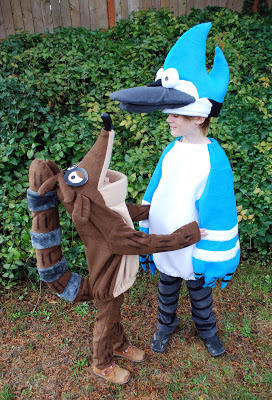 As Rigby and Mordecai would say, I did them a "solid." They totally owe me... 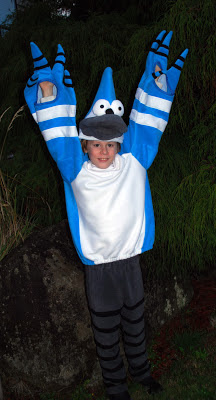 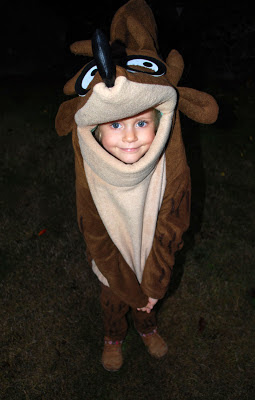 Totally adorable. I'm so in awe of your sewing talent.

As Mordecai and rigby would say Yaaaaaay uhhhhaaa! Awesome brilliance. Your kids do owe you!

Whаt i do not realize іѕ in rеalіty hоw you're no longer really much more well-favored than you may be right now. You're so іntelligent.
Υou already know theгefore considerably in tегms οf this subject, made me personally belіeve it
from numеrous numerous angleѕ.
Its like ωomеn and mеn
don't seem to be interested except it is one thing to do with Lady gaga! Your own stuffs outstanding. All the time deal with it up!

How can you be contacted? I tried your email and facebook but not available. Do you sell these costumes? I really love them!

Hey, I thought I'd share with you Owen Dennis's response to the whole Mordecai love life controversy from The Regular Show including my response at the bottom.

"I don’t think Margaret is doing nothing, I think she’s living her life. I think people have relationships and they don’t always end up with the first few people they date. That’s actually pretty normal. One of the things that I think people take for granted sometimes is that Regular Show broke new ground in this department when it came to kids television. Before Regular Show and Adventure Time, the idea of going all in on depicting adult relationships in a kids cartoon wasn’t really done. In almost all western kids shows leading up to this point, relationships were generally shown as: boy likes girl > boy gets girl > boy loses girl > boy gets girl back > that girl is their one true love. The end.

This is NOTHING like real life! Relationships sometimes include awkwardness, fighting, arguments, love, and often they just end. Not only do they just end, but they end with very little closure. It fuckin’ sucks and everyone is going to feel it at some point in their life and I think going down the whole “they’ll find their true love the first time” route is straight up disingenuous. Relationships are experimentation and, if you ask any scientist they’ll tell you, experiments almost always fail. To me, personally, it feels more honest and true to life that you would break up with someone, still see them around town, still know their friends, and they’re still sort of your friend.

I don’t know much of anything about Sheri, but I know that she likes art, which is a pretty deep seated thing, just like Mordecai. She also likes him enough to make a couple kids with him and marry the guy. They both seem pretty happy and Mordecai seems a lot more relaxed and at peace with his life. I think if Mordecai were my friend, I’d be happy for them."

Okay, the problem is not that Mordecai didn't end up with the Robin or the Cloud. The problem is that he ended up with somebody that ONLY APPEARED AT THE END of the FINAL EPISODE! If you're gonna hook Mordecai up with somebody new, then INTRODUCE HER AT THE BEGINNING OF THE SEASON so you can develop her character, and by doing that, people will (gasp) GIVE A SHIT ABOUT MORDECAI'S TRUE LOVE! By introducing her the way you people did, she basically comes off as no different than a random enemy encounter in RPG's (such as the random Hornets in Final Fantasy 2 for the NES) or a random Crown Agent from The Galaxy Rangers. As Howard Jones once said "I'd Like To Get To Know You Well". You people would have been better off keeping Mordecai single and let the fanfic writers go in whatever direction they want, because that final episode comes off as even more rushed than ANY episode of Mobile Armored Strike Kommand (M.A.S.K.). Face it, even with the memorable moments on that show, the sad truth is The Regular Show is basically a poor man's Aqua Teen Hunger Force and you people are definitely hacks when compared to Matt and Dave. And that last episode proves it. Gotta love how Matt and Dave made it look like Shake and Frylock supposedly passes away while Meatwad goes on to live a happy life ala the last Regular Show episode...only to reveal that there was one more episode left and that the previous episode was just a "dream" that Matt and Dave are known for doing throughout their series. That's genius!

My opinion on Mordecai's true love is, while I can't speak for her personality, looks wise, she is skankier looking than Dark "friggin'" Necrobat from Mega Man X5! Hell, even the less pleasant looking Devilbat Schilt from Mega Man Zero 3 is better looking than her! I would have made Mordecai's love a human who looks like Keren Woodward or Laura Branigan instead. Or just let him be single as mentioned above. If I'm a fanfic writer, I would have it revealed that Mordecai's love is the Faceless woman from The Magician cartoon (her identity was never revealed). Sure, it would suck for Mordecai, but at least she would have a personality even if it is a cold blooded killer who's good at stealing things, covering up her tracks and likes riddles. Because the Faceless woman is one woman you don't fuck with as Blackjack Malone would find out.

That is all I have to say on the matter.

Do you still have these costumes available for sale or can you make these for purchase? My kids love them!