Two summers ago my friend Jessie gave me a box full of gorgeous vintage velvets fabric that had belonged to her grandmother, an artist and quilter. 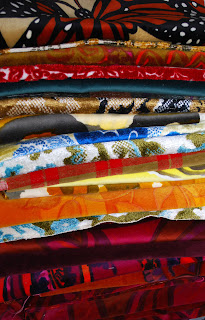 When her grandmother died and the family cleared out her home, Jessie chose the huge heavy box of fabric as her memento and lugged it on a plane all the way from West Virginia to California. She told me that more than anything, seeing and touching those velvets reminded her of her grandmother - her style, her quilts, and her art. The problem though, was that Jessie doesn't sew, so the fabric stayed in the box in a closet in her house. One day she brought it to me and asked if I could use it. I said, "Yes!" It was the kind of haul that would have cost hundreds of dollars retail, yet it was vintage, impeccably kept, and unlike anything available today. All she asked in return was one of my trees. She told me she had wanted one of my tree wall hangings for a while, but thought she might love it even more if it was made with her grandmother's velvet. She said there was no rush, to take my time and let it happen whenever the inspiration struck.

Then, a year and a half and 800 miles later when I was unpacking the box into my new kokoleo studio, inspiration struck, and a few weeks later it made it's way back to California in the shape of a tree... 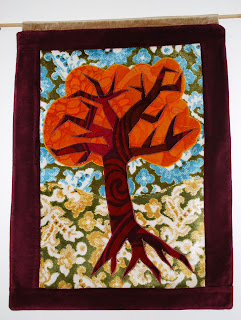 Beautiful.
I think my mother had a coat out of that green velvet on the bottom. She wore that thing until it fell apart.