In an effort to hop back on the blogging bandwagon I'm designating Tuesdays on  a patchwork world as Tutorial Tuesdays where I'll share simple craft tutorials, sewing tips, patterns, and who knows what else. We're finally settled in Seattle and kokoleo is back in craft-action and a tutorial assignment is just what I need to inspire me to share what I'm doing in my studio. In honor of fall and November and Thanksgiving, Tuesday Tutorial #1 was inspired by this turkey... 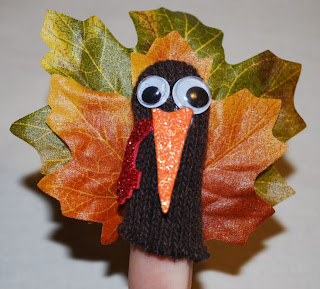 that McKenna and I made in her Crafty Drop-In class at the Renton Community Center led by Kelly Desimone-Affleck. (Check out her cool custom greetings and design shop tomato-tomato.) It's a finger puppet made from a cut-off glove finger. I'm not sure if Kelly made up the project or found it somewhere, but it's cute.

Now, you might be thinking, "So your first tutorial is going to be a a total knock-off of someone else's idea?" No, because people who write tutorials based on other people's projects are lame, especially when those people claim the projects as their very own and don't give props to those who gave them the idea. Just sayin'.

Months ago, on a whim, I signed up to do a charity craft bazaar at a local church. I figured it would be an easy affordable way (only $25 for a table) to get back into craft show mode after several months hiatus. Last Friday I panicked because I realized I hadn't really prepared for it. I have tons of kokoleo inventory but no holiday wares or cheap crafty trinkets that the type of people who attend charity church bazaars like to buy. So I decided since I had a bunch of leaves left over from McKenna's costume that I would make a bunch of turkeys. And I did. 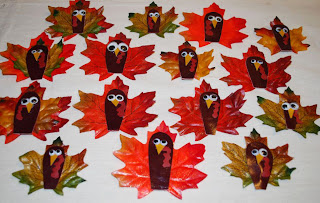 Instead of using glove fingers and craft foam I used brown, yellow, and red pleather, and then combined all the pieces with hot glue. 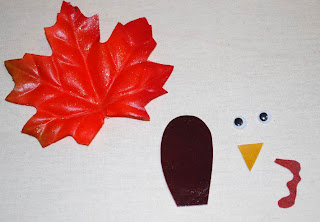 And instead of finger puppets, I made magnets: 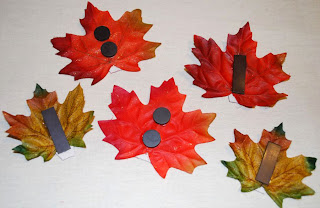 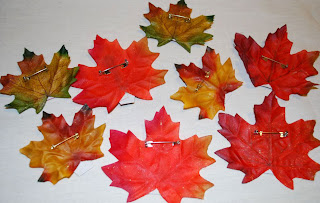 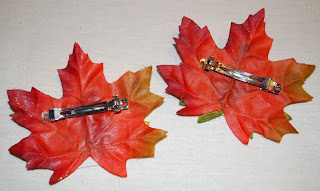 And I didn't sell a single one. In fact, I only sold two things that day and they were to fellow vendors. Worst show ever. The turnout and venue were so bad I left 4 hours early, and I never do that. Note to self: Never, on a whim, sign up to do random craft bazaars you find on craigslist.
So now I'm stuck with a bunch of goofy turkeys. Want one? Be the first to comment and I'll send you one free of charge. (Spammy robots are not eligible).
Posted by KB at 8:50 PM

Crown, email me your address - kbvanhorn (at) yahoo (dot) com and i'll send you a turkey!

Hey, your "goofy" turkeys are adorable! You need to forget about church craft fair penny pinchers; they're not willing to pay much more than cost, if that. Your time, effort, and creativity would never be appreciated. Find venues with clientele who are willing to spend money on personalized, quality items. Does Seattle have an art walk downtown?

Very cute and I might pinch your idea as a Thanksgiving party craft for my daughter's class. If you don't mind too much please.
Thanks.

Sure Becky - spread the turkey love. I give all props to Kelly for the inspiration and I'm sure she won't mind if others use the idea.

You're right Gabby. I don't know what I was thinking. It was for charity (a homeless shelter) and close. Still, I should stick with the indie and art markets, for sure. Hopefully this summer I'll try some outdoor markets.