Come On Down! to visit.

I haven't been hanging out in blogland very much lately. Summer does that. There's too much going on to stop and blog about it all.

Last weekend my two best childhood friends, Amy and Carrie, flew out here all the way from the east coast to see me. The last time we were together was in 2006 at our friend Stew's wedding in Texas (blogged here). We've each had another kid since then. Even though it's been 3 years since I last saw them, the minute we get back together it's like we're in junior high all over again, except now we have husbands and children and houses and jobs and stuff.

Of course I took them on the Grauman's Chinese Theater/Hollywood and Highland/Pig and Whistle tour. 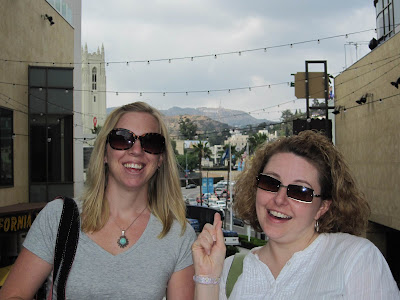 and then I made them hike up the Mt. Hollywood trail: 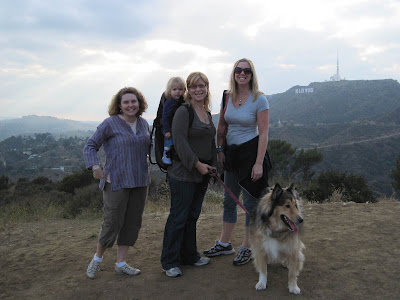 On Sunday, I used their visit as an excuse to visit the Melrose Ave. Flea Market (and gave Erik his Father's Day present - a few kidless hours of peace and quiet at home) . Later, our friend Jessie and her partner Janet came to visit and we got silly. 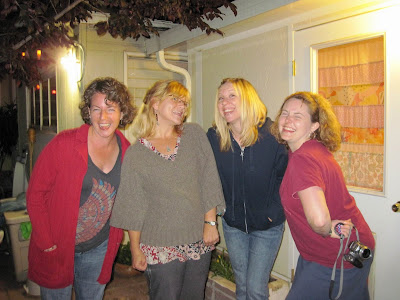 The next day we got even sillier and went on down to the CBS studios so we could be on The Price is Right (Amy's lifelong dream). We even made these shirts the night before. They had a $ on one shoulder and WV on the other (nevermind the fact that none of us even live in West Virginia anymore, we'll still represent it). 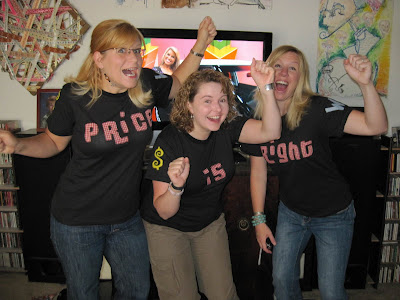 Unfortunately though, we were turned away at the gate. It seems that even if you have tickets (we did) they only accept the ones who camp out and show up before 6 a.m. Oops. Oh well, I told Amy that she got the quintessential Hollywood experience by having her hopes dashed and her heart crushed in this city of broken dreams. I also snuck into the gift shop and bought her a Price is Right travel mug, then shouted her name Price is Right style and told her she won it. Who needs a new car anyway?

This morning we did get up bright and early, but just so I could drive them to the airport. Now they're back home with their kids and husbands and jobs and stuff. Hopefully it won't be so long until I see them again.
Posted by KB at 10:28 PM

looks like you ladies had a blast! we've been out west for over a year and none of my friends have visited yet... love the shirts you made!!

Thanks kat. If you ever make it down the coast, look me up. I'm always up for visitors.

My friend and I were recently discussing about how we as human beings are so hooked onto electronics. Reading this post makes me think back to that debate we had, and just how inseparable from electronics we have all become.


I don't mean this in a bad way, of course! Ethical concerns aside... I just hope that as memory gets cheaper, the possibility of downloading our brains onto a digital medium becomes a true reality. It's a fantasy that I dream about all the time.