Early this morning, before anyone in the house was awake, I got up and headed across Hollywood to Silverlake to set up shop at the farmers market. 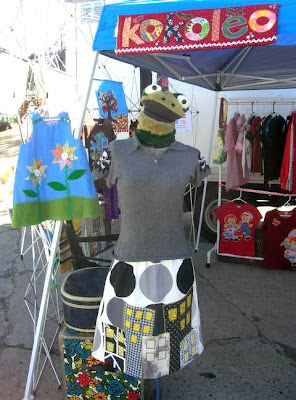 My fellow craft show vendor friend Saundra from A Precious Few sells there (they want the vendors to make a commitment to be there every week). I told Saundra I'd be willing to substitute for her if she ever wanted to take a weekend off and earlier this week she emailed and said, "How about this weekend?" Suddenly there I was, set up in the middle of the street in Silverlake. 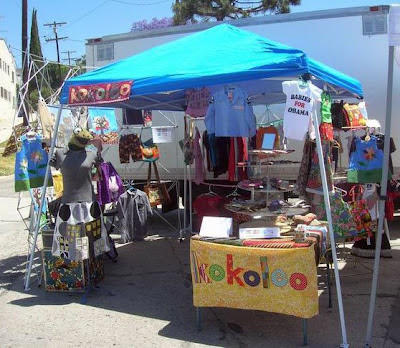 It was fun. But HOT! Triple digit hot. I was right on the corner and had a nice view: 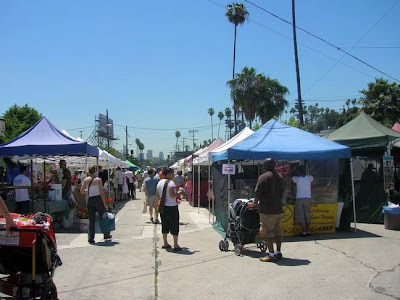 That's downtown L.A. in the distance. 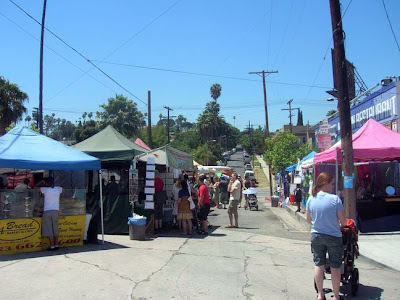 I had the nicest and best smelling vendor neighbor ever - Jose of Magical Soap. 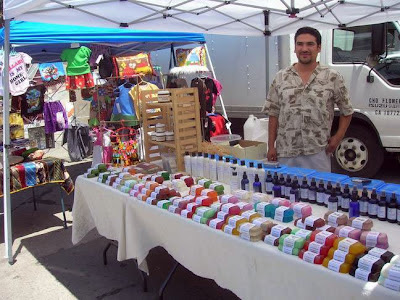 He gave me a free bar of soap (I chose Patchouli Rose, because I'm a hippie.) Come to think of it, maybe he was subtly trying to tell me that I stink? Nahh, he was just really nice. Sage was in awe of the soap when I showed it to him. He said, "Wow, it's Magical Soap!"

It was a decent day sales-wise, I sold some baby clothes and headbands and met some cool people. From the other vendors, I bought a handmade vintage Popeye the Sailor Man print skirt ($6!), a ginger and sugar cane fizz, wasabi peanuts, and jalapeno pistachios. I heard the turnout wasn't normal due to the heat, but I didn't mind the downtime to sit in my booth and sketch some ideas. Plus, it was over by 1:00. Nice! An hour later I was back home swimming with the kids.
Posted by KB at 10:19 PM

How neat is that.

Amblus - I hope someday we can be vendor neighbors!