Anyone who was cool in the 70s will remember these: 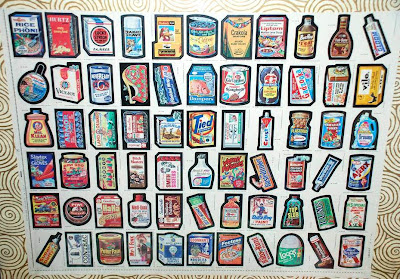 Wacky Packages! This is an uncut sheet I got off ebay way back in 1998 when Ebay was new and I had lots of time to scour it for random bits of nostalgia. I laid it over some swirly wrapping paper, framed it, and it's hung in every house we've lived in since Savannah. Inevitably, when someone from our generation sees it they say, "Oh my god, I had those!" and then they spend a while standing there reading them all and laughing.

When we moved to this house I hung it over Sage's bed and now that he can read he's really interested in them. A few months ago he started a tradition where we had to read a new one every night. He'll pick one out and read it and then ask me what it means. Some people may think the humor and subject matter are a little too mature for a kid his age, but I've turned it into a teaching tool. It's helped him learn not only new words and their definitions, but also about history, irony, the power of advertising, and pop culture. A typical conversation goes like this: 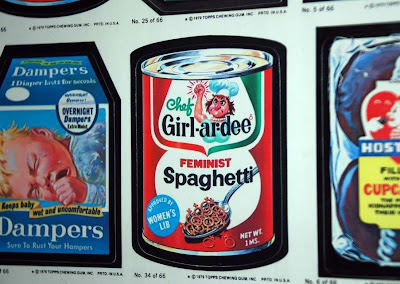 Me: Someone who stands up for the rights of women so that women and men will be treated the same when they do the same job.

Sage: Oh, O.K. Chef-Girl-Ar-Dee Feminist Spaghetti That's funny. She wants her spaghetti to be treated the same. And here it says Ahh...pproooo...ved by Women's Lib.
What's a Lib?

Me: Lib is short for Liberation. It means freedom.

Sage: Was she a feminist?

Also, it's taught him about cigarettes: 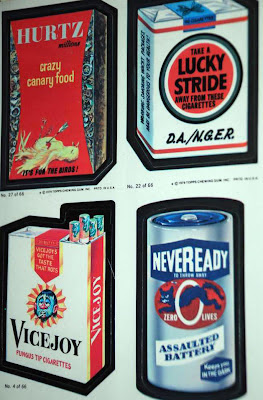 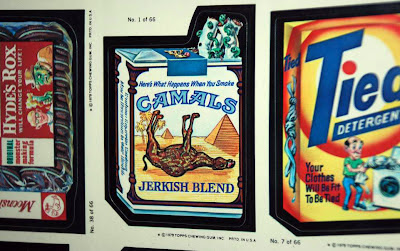 Sage has come to the conclusion that he's not going to smoke when he grows up.

Sometimes I have to explain certain products that he doesn't know about, like this: 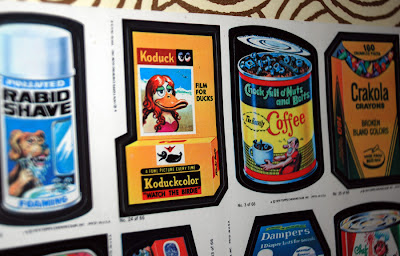 . . . says the boy from the digital generation. 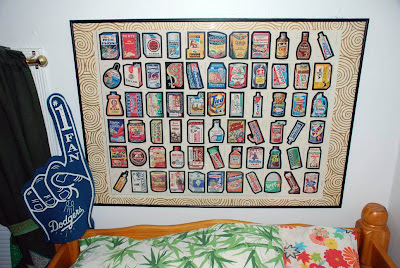 I love the way you framed them. And who knew that wacky packages could facilitate such important discussions with kids!

my grandpa used to be a candy distributer and I had tons. Recently I found them and turns out several were rare ones. I listed them on ebay and got ridiculous amounts of money for them but kept most of them because they certainly are the best part of the 70's for me.

Oh man shari, I bet you were the coolest girl in school! I can't believe your son let you sell some.

This group was actually twice the size, but I cut up the duplicates and have given them out over the years. I think I paid something like $24 for them all back when Ebay was new and not many people were using it.

Too freaking cool. I love it, both the idea of framing them and the learning that Sage is getting from them.

Yay for teaching your five-year-old about feminism! I have yet to introduce Malayna to that word because I don't think she realizes yet that boys and girls are treated differently. I'm sure as soon as school starts she'll get a crash course in sexism.

Scout - you're a teacher, you should use them in your class. Ha! The parents would freak!

Lisa, hopefully by the time Malayna is in the workforce, sexism will be a thing of the past. If not, I can see her fightin' the Man.

Man, I'd love to. I'm still sweating over the fact that I've read "The Giggler Treatment" (a kids book by Roddy Doyle which is primarily about poop and other things that 8 year olds find hilarious) for four years running and have yet to have an angry parent at my classroom door. Don't think I'll tempt fate with the Wacky Packages.

Need To Boost Your ClickBank Banner Traffic And Commissions?