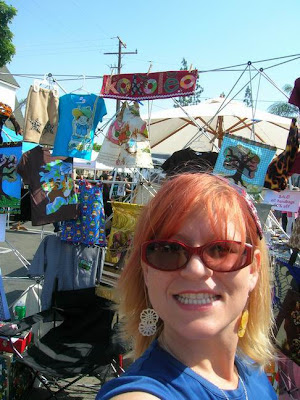 It was awesome. I'm so glad I did it. Not only did I meet some cool people, see some old craft friends, get inspired by awesome art, and get a tan, but I also sold a bunch of kokoleo stuff and got lots of nice feedback on my work. Nicole, the organizer, rocks. We traded a necktie headband (mine) for a felt bird on a branch pin (hers). I'm honored that she likes my stuff because I think her stuff is pretty awesome too. 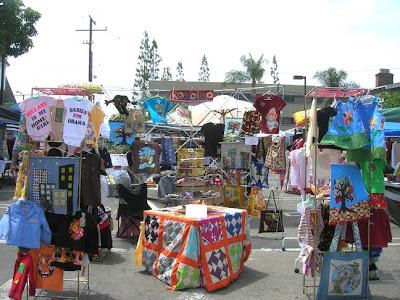 Well, that picture makes it kind of look like a big mess-o-chaos, but in person it was more inviting. I was right on the end too so customers had plenty of room to walk around. I sold a few toddler dresses, a bunch of tie stuff, some grocery totes, and more grownup clothes than any other show I've done before. Over the past few weeks I've been making some skirts to put on the website and I accidentally sold them all today. Oops! I guess that's a sign I should make more. This was the first to sell: 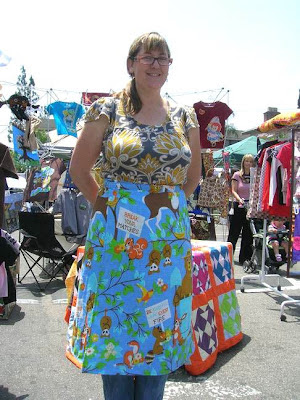 A reversible wrap-around made from the last of my Smokey the Bear fabric.

A week ago I didn't even know if I wanted to do the show and now I'm so glad I did. Did I mention I'm glad I did the show? I am. Seriously, I've been kind of down lately wondering why I spend so much time making all these crazy things, doubting that anyone will want them, comparing myself to others and feeling like a loser. I feel better now.
Posted by KB at 10:26 PM

Oh, my god1 How could you ever feel like a loser! You are so creative and you take initiative to put your work out there. I wish I were as successful as you are with my writing. I suppose it just shows; you've got to keep trying! So thank you for inspiring us and I think I would never doubt your success: the reason people like your stuff is that it comes from a very personal vision of the world that you let yourself be vulnerable enough to share. That's what makes your stuff unique.Congratulations on a great day!

Aw, you made me tear up a bit. Thanks!

That is so great! Your booth looks amazing, colorful and friendly, a bit of chaos is good too because I hate the booths that look just like a store. More like a funky boutiqe is better.
I know what you mean about feeling down, I was the same way and then recently had some purchases and feedback that gave me a whole new energy.
YOU ROCK! SEWING ROCKS!

Good for you for getting out there!! Your booth looks really fun, I would totally go in there. Good for you on getting some perspective on your work...IT is great!!

congratulations on your sales! Your booth looks very inviting! I would definitely stop in and look for a very long time...so colorful!

Yay for you, KB! Of COURSE people want to buy your stuff - it rocks!

I so would've been there if it wasn't all the way across the country...

Wish your booth and shows were closer! I love eclectic, 'crowded' stuffed-full displays. They just fell more 'cozier' than sterile, almost empty booths. All that color, action and chaos make a treat for the eyes and all the senses!

I so wish I would have had a chance at that Smokey the Bear skirt! We just got home from visiting Smokey Bear's grave and monument in Capitan, NM!
That fabric is adorable!

I just found your blog and have been reading it for the past hour. I found your blog through Craft Mag featuring your totally awesome spool of thread T-shirt. However I stopped in my tracks reading about your craft show, I just blogged about a similar thing last week. Your creations are to die for...you have been given a talent and I'm sure many are thrilled that you share. I have added you to places that I like to visit on my blog, hope it's okay. Stop by for a visit.
Kim
www.whitecottagedesign.blogspot.com