Come visit me this Sunday at the Patchwork Indie Arts and Crafts Festival in Santa Ana! 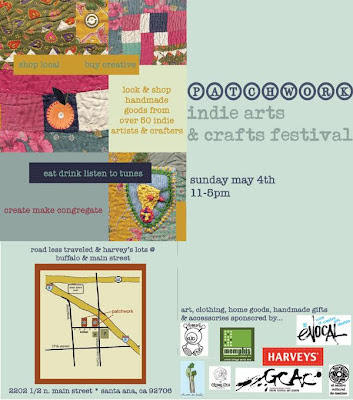 When the applications for this went out a few months ago I decided not to do it because I convinced myself it was too far away and I should probably just stay home and have family time. Then last week I started seeing postcards and announcements about it and I saw all the cool crafters who were participating and I got jealous. It looks like it's going to be a blast. I wrote to the organizer, Nicole, of Random Nicole asking if there was any room left and she said I could take the spot of a vendor who had dropped out. Sweet! I'm in! Even though it's about an hour away and I have to brave the freeway, I'm excited to set off solo on a crafty adventure. Mama needs to get out of this house!

So, in anticipation for the show, I made a whole new batch of necktie accessories, including these headbands: 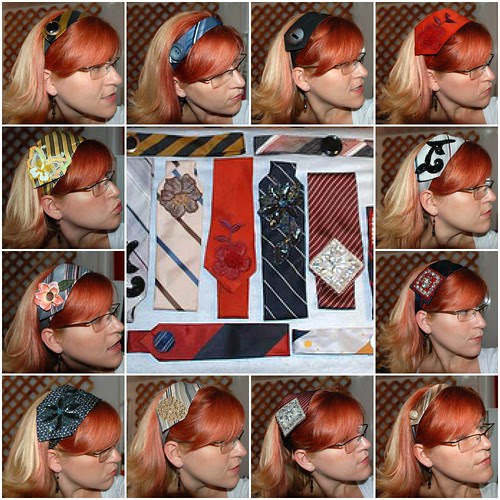 plus some chokers and cuffs as well. They tend to sell well for me at shows. Also, I needed to use up a lot of the ties I'd been holding onto because there's just something not right when a grown woman hoards mens' ties. I need to prettify them and send them back out into the world.

A Spoonful Of Sugar said...

Good Luck at the festival!! Your headbands are really cool.

Good luck at the show!! It sounds like so much fun- you Deserve to go :)If I were around your area I would certainly go see you.
Chantal/cottagewoman

Chantal - I sent your package off in the mail yesterday - expect it soon!

I think you're spoiled! Holy smokes, you within an hour's drive of so many great shows that you can consider not doing one because it's an hour away?

Oh yeah, I guess there's the issue of traffic causing an hour-long drive to expand. But back to my tirade. . .at least you don't have to fly all over to hang with the hipsters.

Jennifer - I can't believe there are no cool shows happening in Austin. Austin's full of hipsters! If there aren't any going on you should put one together yourself. It'll make you the most popular girl around.

I would never fly for a show. For one, I wouldn't know how to lug all my stuff. Also, I couldn't afford it. Plane tickets + food and lodging would negate any profit I made.