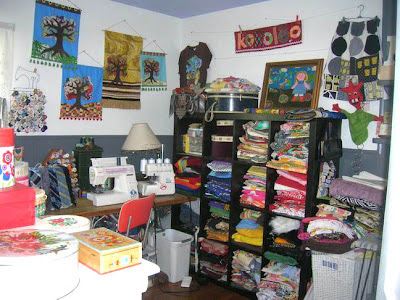 This weekend I'm gonna do it. Or at least most of it. Or maybe some of it. Remember way back in October when I blogged about the new studio we had built? I have yet to fully move in. There are a million different reasons (excuses) for this. There were all the winter craft shows that consumed my weekends, then the holidays, plus it was cold, then there was the HOLE - that was the biggest hangup - what to do about the HOLE. I can't believe I didn't take a picture of the HOLE to show you. What is this HOLE, you ask? Well, it seems the previous owners decided to cut a HOLE in the floor of backporch, fill it with gravel and install a fountain. By the time we got the place though it was just a HOLE full of gravel. Shortly after the new room was built we filled the HOLE with cement. Then left it alone for a few months while we decided what to do next.

We got this bright idea that we'd turn it into art. Floor art! We'd make a mosaic! After numerous trips to Lowes, Home Depot, tile stores, etc., we couldn't find the tiles we envisioned (and could afford). Twice I ordered cool looking tiles off ebay and both times the sellers sent the wrong tiles. This HOLE was starting to become a monkey on our back. A big HOLY monkey. Finally one night, after a few gin and tonics we said Screw it! Let's just do something with what we have and get this over with. Here's the end result: 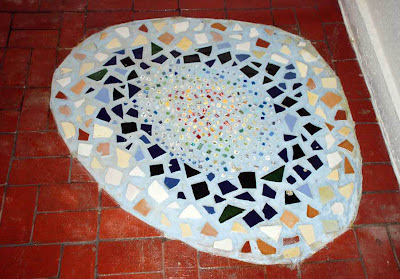 Meh. I don't love it. I don't hate it either. We adopted the motto: It's better than a hole! and joked that we should start a company called EriKB Construction where we offer to fill holes with random shards of crap for people.

I won't even go into the part where Erik poured polyeurathane on it to make it shiny but instead it turned brown and I painstakingly pealed off the polyeurathane one night. 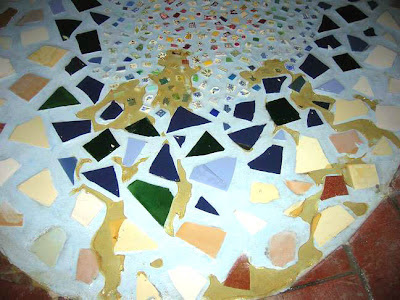 AAAAnyway. I got it all off. And, it's better than a hole. You can't throw a rug over a hole.

No more excuses. This weekend I'm moving in. No starting any new projects until I've relocated. No yard sale excursions (okay maybe just this one, it's close). No camping trips. McKenna needs to move out of our crowded bedroom and into her own space (my old studio). Sniff. I'm gonna miss her. Maybe this is the reason why I haven't been so quick to move.

Here's a before picture: 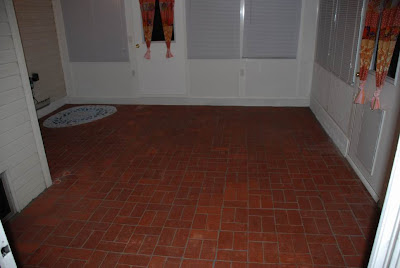 Email ThisBlogThis!Share to TwitterShare to FacebookShare to Pinterest
Labels: studio

Dang, too bad you weren't offering this service a couple of years ago. Our bathroom had a big dirt hole with a tree planted in it. Yikes. We think it was a shower gone bad or something.

Well, at least the hole is in the corner!