Sage likes to cut things up with scissors. He's seen me working with them so much it's no wonder he wants to use them too. I figure it helps hand-eye coordination and whatnot so I gave him his own scissors and generally encourage his crafty snippery. Often though, this means I'm left to pick paper snowflake parts out of the carpet. The other day he was cutting up paper and getting glue all over the table and chair. I was just about to scoop up the mess and toss it in the trash when he stopped me and beamed, "Look what I made for you!" 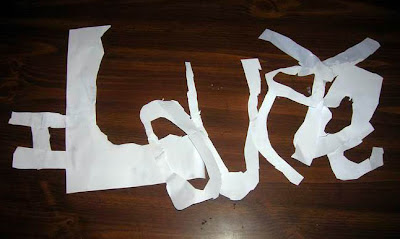 Awww. For those of you who can't read paper scraps, it says "I Love You." That's sweet. My boy is getting pretty creative with the scissors. Check out his latest experiment: 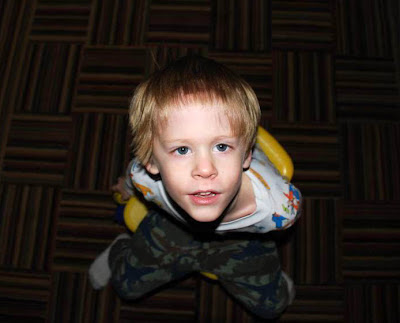 Not so sweet. He hacked his bangs away and even managed to chop some off the top a la Alfalfa from the Little Rascals. I thought he was too old to do this. I thought he learned his lesson after the whisker incident of 2006 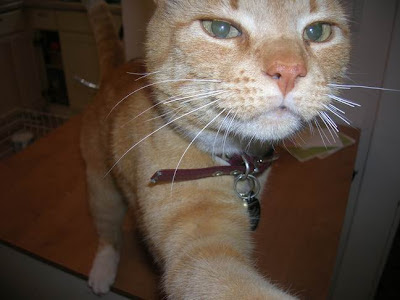 when he got a major timeout and lost his scissor privileges for months.

(Yes, I am one of those terrible moms who does not hold her child's hand every waking moment. Sue me. I don't, however allow him to play with knives and power tools.)

So here he was tonight getting the shortest haircut of his life: 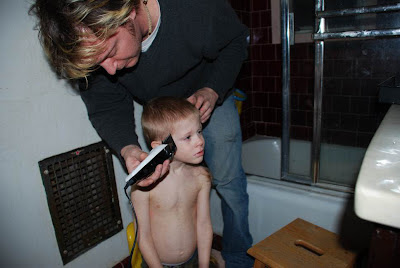 Afterward he looked in the mirror and cried. Poor guy. I suppose this will be one of those stories we tell around the Thanksgiving table. Now he just looks like he'd headed for boot camp.
Posted by KB at 11:24 PM