All of these things are unlike any others

Last night, Sage and I were talking about how tomorrow would be Saturday. I said, "You know what that means!" thinking he would answer something to the effect of it's the day that we can sleep in, snuggle, watch cartoons, and not have to go to work or school. Instead, he said, "Yard Sales!" Hehe. I've created a monster. But a bargain-hunting one nevertheless.

At our first stop, I got all these needlepoint and embroidered pieces: 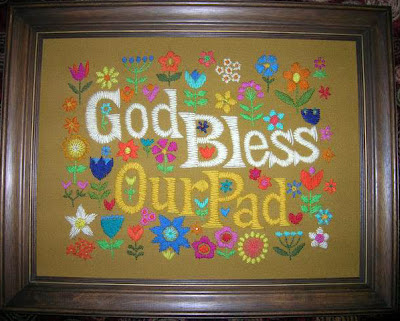 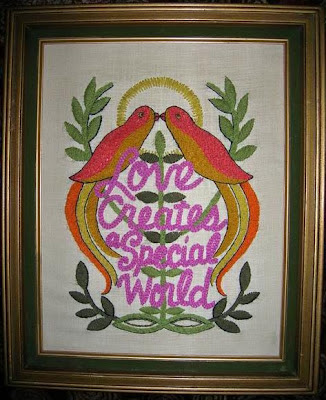 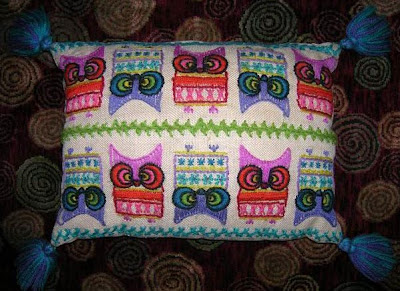 I imagine most of those will eventually become purses and pillows. When I was taking a picture of that last group, the skunks and green beans, Sage was dancing around them singing the song from Sesame Street:
Which of these things is not like the other?
Which of these things just doesn't belong?
Can you tell which one is not like the other. . .
by the time I finish this song!
Have you guessed which one yet? That's right! The green beans! Good job.

Speaking of retro stuff, I also got this: 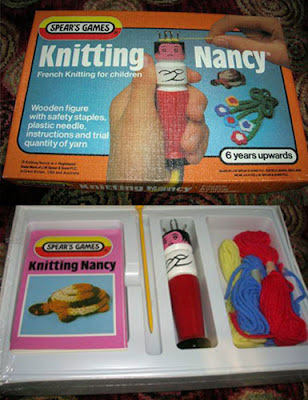 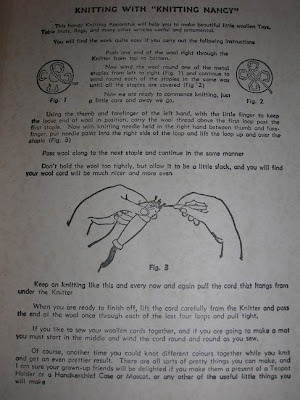 I attempted to follow the instructions but ended up with a big mess. I thought it would be easy seeing as how it's meant for kids, but my feeble attempt just goes to prove that I suck at any form of knitting. Maybe Sage or the new kid will figure it out.

Speaking of the new kid, at the next yard sale, I got these: 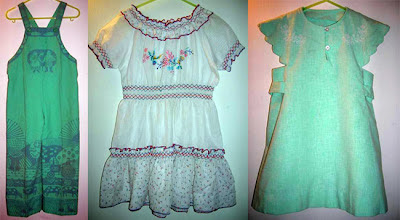 They won't fit her for years, but I couldn't resist. Vintage! Handmade! At that house, I overheard a mom say to her little boy, "Sage, look at this." and I did a double-take. Her boy was named Sage too! It was our first other-kid-named-Sage encounter.

After that house we stumbled upon a carnival at an elementary school in Burbank. For $5 worth of tickets we played a few games, got a hot dog, 2 snowcones and a bag of popcorn. Sweet!

From there we scoped out a few more random sales and got a few more random things - a book and a fake drill for Sage, a tooled leather change purse for me, and a shirt for Erik. Not a bad way to spend a sunny Saturday morning. Total cost (including the carnival): $22.50, give or take an arm and a leg for gas.

Damn, now I can't get that Sesame Street song out of my head.
Posted by KB at 4:56 PM

Great stuff, the knitting Nancy - oh cool! I suck at knitting too, try crocheting, it's easier!

Hey Tricia! I just checked out your kookybags.com site. Cute bags! I especially love the Rebecca patchwork one. I just added your cArried AwAy blog to my link list too! Thanks for your comment. My comments section is usually so lonely.