Last one and then I'm done. These have all been published on Instructables (and featured on their home page - whoo!) but I thought for posterity's sake I'd publish them on my blog too.


I used this pic for all the characters I made: 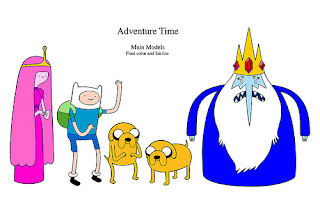 and came up with this for the Ice King: 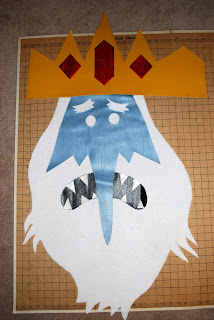 White Fleece works well for the beard and eyebrows, but you'll need some sturdy material for the other face pieces. I used vinyl, but you could also use posterboard.

Cut out the face piece as shown. 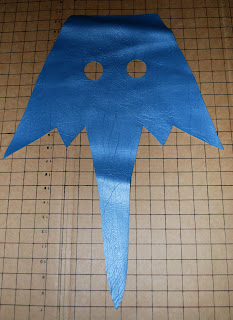 Before you cut the eye holes, hold it up to the wearer's face and mark where to cut.

Lay the face piece on top of your fleece and cut out the beard. Cut out some eyebrows from the scraps. 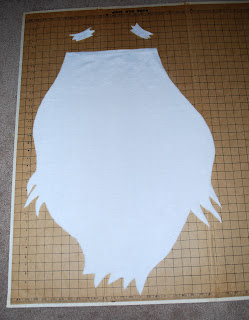 Cut out a frowny mouth and pointy teeth. 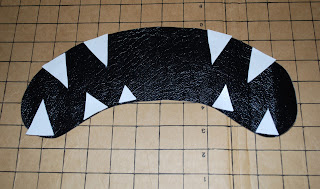 Cut a crown and 3 red gemstones. 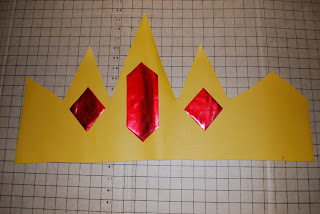 Cut out a space in the beard for the eye holes.

Apply a generous amount of fabric or tacky glue to the back of the mouth and face pieces and attach them to the beard. Do the face first, then lift the nose and insert the mouth underneath. 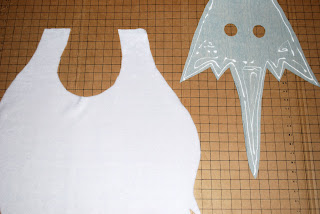 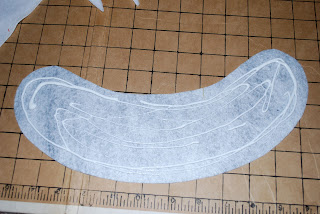 Glue on the eyebrows and teeth. 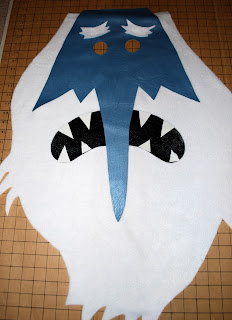 Glue the gems on your crown. On the back of the crown, I glued on a thick fusible stabilizer to reinforce the points and make them stand up. You could also use cardboard. 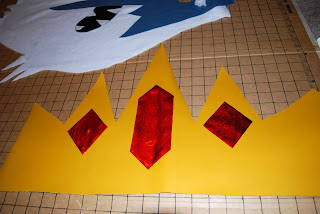 Attach the crown to the face with glue or a sewing machine straight stitch. Measure around the head and secure with a straight stitch or heavy duty glue.

With a sharpie, draw lines on the gemstones and under the eyes.

For the robe, I got a blue graduation gown at the thrift store. To keep the beard in place, I used glue dots on the shoulders.

My husband found it difficult to see while trick-or-treating in the dark, so he simply turned the crown around and wore it backwards. (Also a good tip if you want to drink at a party.) 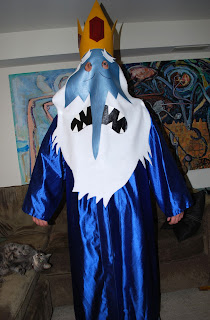 For Princess Bubblegum, I made a crown out of the same vinyl I used for the Ice King's crown and added a green "gemstone" (cut from an old shower curtain). I reinforced it on the back so it would stand up. 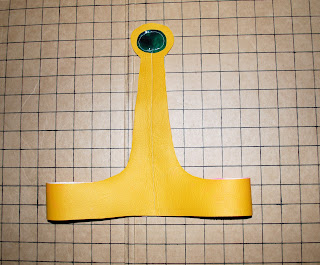 For the outfit, I bought a pink shirt and skirt at the thrift store and made a purple sash to go around the waist. For the hair, I bought a Rapunzel wig and sprayed it hot pink with temporary hair color (which rubs off on anything that touches it). 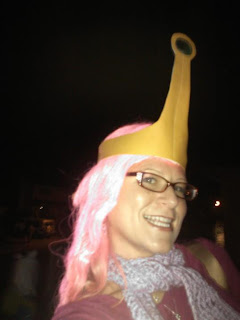 Whew! That was quite a labor of Halloween costume family love.

Article writing is also a excitement, if you be familiar with then you can write or else it is difficult to write.

Today, I went to the beach with my kids. I found a sea shell and gave it to my 4 year
old daughter and said "You can hear the ocean if you put this to your ear." She placed
the shell to her ear and screamed. There was a hermit crab inside and
it pinched her ear. She never wants to go back! LoL I know this is completely off topic but I had to tell someone!

Hi there mates, nice post and pleasant urging commented here, I am genuinely enjoying by these.


Feel free to visit my webpage: armitron watches for men

I'm really loving the theme/design of your weblog. Do you ever run into any browser compatibility issues? A few of my blog readers have complained about my site not working correctly in Explorer but looks great in Opera. Do you have any advice to help fix this problem?

Thank you, I've recently been searching for information about this subject for ages and yours is the greatest I have found out till now. However, what concerning the conclusion? Are you positive concerning the source?

I've been exploring for a little for any high-quality articles or blog posts on this kind of area . Exploring in Yahoo I at last stumbled upon this web site. Studying this information So i'm
glad to exhibit that I've a very just right uncanny feeling I came upon exactly what I needed. I so much for sure will make sure to don?t forget this web site and provides it a look on a constant basis.

Hey I know this is off topic but I was wondering if you knew
of any widgets I could add to my blog that automatically tweet
my newest twitter updates. I've been looking for a plug-in like this for quite some time and was hoping maybe you would have some experience with something like this. Please let me know if you run into anything. I truly enjoy reading your blog and I look forward to your new updates.

Hi colleagues, its impressive paragraph about tutoringand entirely explained, keep it up all the time.

It's actually very difficult in this full of activity life to listen news on Television, thus I just use web for that reason, and take the latest information.

Hello this is kind of of off topic but I was wanting
to know if blogs use WYSIWYG editors or if you have to manually code with
HTML. I'm starting a blog soon but have no coding expertise so I wanted to get guidance from someone with experience. Any help would be greatly appreciated!

Feel free to surf to my site; akribos

I blog often and I seriously thank you for your content.
Your article has truly peaked my interest. I am going to take a note of your website and keep
checking for new information about once per week.
I subscribed to your Feed as well.

Here is my site: psih.org

Wow, marvelous blog structure! How long have you ever been blogging for?
you make running a blog look easy. The overall glance
of your web site is magnificent, let alone the content!

Feel free to surf to my website; anti cellulite treatment

Today's window offer both fiberglass and metal screening.
Maxillary occlusal cant- TADs can fuly intrude the cant without the typical extrusive side effects
inn the non-affected side. The back pain may get worse and if it is pressing on a nerve you
may have weakness or numbness in your legs.

obligation combination may be an adept in your garden gloves in adventurous goods stack away.
If

I really liked your blog and recommended it to my friends. I recommend that you also go and see my site, https://youtube-to-mp3-converter.com/. You can use my Youtube 2 mp3 Converter to download any track to your iPhone.