How to make a Bowser Shell Birthday Cake

For those of you who aren't familiar with Super Mario Bros., this is Bowser: 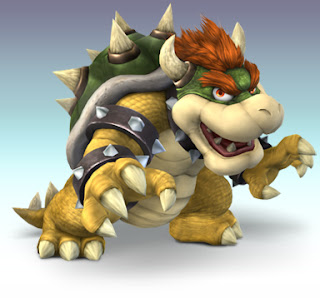 He's the bad guy. After months of deliberation, Sage decided he wanted a Bowser shell-shaped birthday cake. The night before his party I made it. Here's how:

First, I mixed 2 boxes of cake mix and poured the batter into a cake pan, a larger pie pan, and a shallow metal mixing bowl. (Note: Bowl-shaped cakes take longer to bake.) Then I let them cool separately. Here they are before the icing: 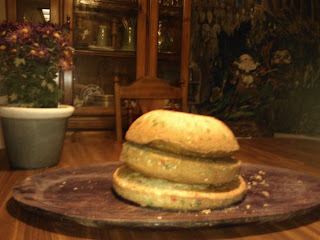 Next, I iced the bottom layer with whitie icing... 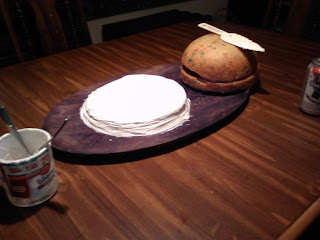 and the other two with green... 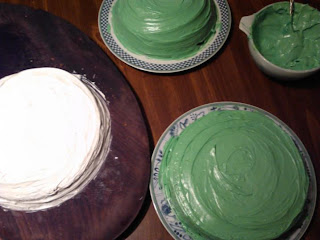 and stacked them again, 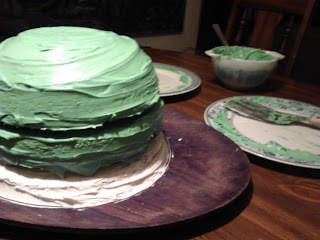 and smoothed out the icing. 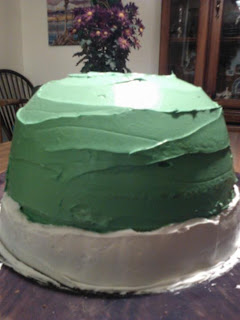 Now for the spikes. I used sugar cones that I coated with light yellow icing. 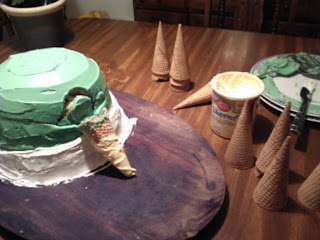 It was and experiment that kind of failed at first, but I got the hang of it. (Note: Don't just try to ram the cone in. Carve circle with a spoon first and then slowly push the cone in deep.) 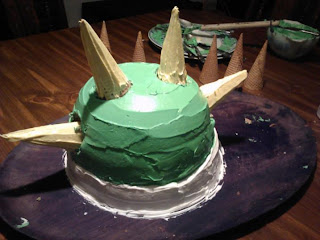 Bower has 10 spikes - 4 down the middle/top and three on each side. 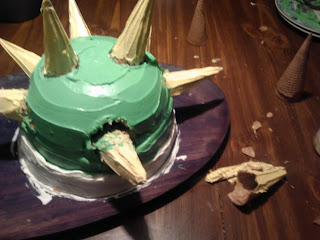 (Note: Have extra cones available, there may be some casualties.)

Next, I filled a freezer bag with orange icing, cut a hole in the corner of the bag, 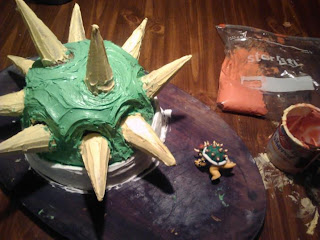 and squeezed an orange ring around each spike at the base.

I dyed some shaved coconut green and scattered it on the tray to look like grass, and here's the end result: 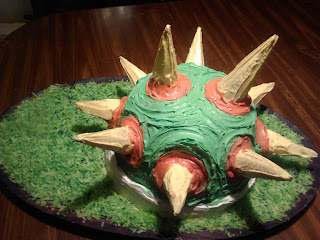 Normally I don't learn post on blogs, but I wish to say that this write-up very pressured me to take a look at and do it! Your writing taste has been amazed me. Thank you, quite nice article.

Aw, this was an exceptionally good post. Finding
the time and actual effort to generate a good article… but what can I say… I hesitate a lot and never manage to get nearly anything done.

I enjoy, cause I discovered exactly what I was looking for.
You've ended my 4 day lengthy hunt! God Bless you man. Have a great day. Bye

Here is my web-site additional info

This info is invaluable. How can I find out more?

This design is steller! You most certainly know how to keep a
reader amused. Between your wit and your videos, I was almost moved
to start my own blog (well, almost...HaHa!

) Excellent job. I really enjoyed what you had to say, and
more than that, how you presented it. Too cool!

I have read so many articles about the blogger lovers however
this paragraph is truly a good paragraph, keep it up.

Look into my blog ... Abercrombie and Fitch

Wow that was unusual. I just wrote an incredibly long
comment but after I clicked submit my comment didn't show up. Grrrr... well I'm not writing all
that over again. Regardless, just wanted to say superb blog!


Look into my blog :: Sac A Main Louis Vuitton

I am sure this piece of writing has touched all the internet viewers, its really really fastidious post on building up new weblog.

Thank you for the good writeup. It if truth be told
used to be a amusement account it. Glance complicated to more added agreeable from you!
However, how could we communicate?

If you are going for finest contents like myself,
just visit this website everyday because it gives feature contents,
thanks

Aw, this was an exceptionally good post. Taking the time and actual effort to create a superb article… but
what can I say… I put things off a whole lot and don't seem to get nearly anything done.

Feel free to surf to my web page ... Nike Free

It's going to be end of mine day, but before end I am reading this impressive paragraph to improve my know-how.

Thanks for your marvelous posting! I truly enjoyed reading it, you might be a great author.
I will remember to bookmark your blog and will come back down the road.
I want to encourage you to ultimately continue your great work, have a nice evening!

My partner and I absolutely love your blog and find the majority of your post's to be exactly I'm looking
for. can you offer guest writers to write content for yourself?
I wouldn't mind writing a post or elaborating on many of the subjects you write related to here. Again, awesome blog!

I'm impressed, I have to admit. Seldom do I encounter a blog that's
both educative and engaging, and let me tell you, you've hit the nail on the head. The issue is something that not enough men and women are speaking intelligently about. I am very happy I found this in my hunt for something relating to this.

Asking questions are actually nice thing if you are not understanding
anything completely, however this article presents pleasant understanding yet.

Awesome things here. I am very satisfied to see your article.

Thank you so much and I am looking ahead to touch you.
Will you kindly drop me a e-mail?

I'm excited to uncover this web site. I wanted to thank you for your time for this wonderful read!! I definitely savored every bit of it and I have you bookmarked to check out new stuff in your website.

What i don't understood is in truth how you're no longer really much more well-favored than you may be right now.
You're very intelligent. You know therefore significantly with regards to this topic, made me in my view consider it from a lot of varied angles. Its like women and men don't seem to be
involved unless it is one thing to accomplish with Girl gaga!

Your own stuffs outstanding. All the time care for it up!


Stop by my homepage: how to create binaural beats

You need to be a part of a contest for one of
the finest websites on the web. I most certainly will highly recommend this blog!

I have read so many posts about the blogger lovers however this post is truly a
pleasant paragraph, keep it up.

I used to be suggested this website through my cousin.
I am no longer certain whether or not this post is written by means of him as nobody else recognise such particular about my difficulty.
You're amazing! Thank you!

my weblog; Sac a main Guess ()

Wonderful goods from you, man. I have understand your
stuff previous to and you're just too magnificent. I actually like what you have acquired here, really like what you are saying and the way in which you say it. You make it entertaining and you still take care of to keep it smart. I cant wait to read far more from you. This is really a wonderful web site.

Quality articles or reviews is the important to invite the
visitors to pay a visit the web site, that's what this web page is providing.

Asking questions are genuinely nice thing if you are not understanding anything completely, except this post presents fastidious understanding yet.

Take a look at my homepage :: Michael Kors Outlet

I'm not sure why but this web site is loading extremely slow for me. Is anyone else having this problem or is it a problem on my end? I'll check back later on
and see if the problem still exists.

Thank you so much, gave me the idea I was looking for an I love doing"specialty"cakes for my family for fun