Thrift Thursday: A Paper Doll (minus the paper)

Last week, as I was perusing the fabric aisle at our local Value Village, McKenna found this and asked if she could have it: 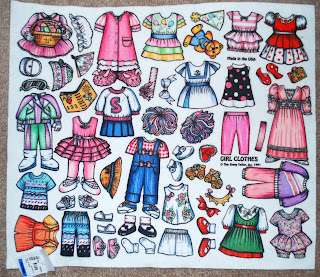 It's made of felt and designed by "Story Teller Inc." (1991) for use with felt boards. I tried to explain to her that it was missing an important part - the doll on which to put the clothes, to which she replied, "That's okay, you can just make me one." Smart girl, she knows I cant resist a crafty challenge.

At first I thought I'd make a felt board with a flat felt girl, but then I decided to go the 3-D route and make a real doll.  I chronicled the process with my camera phone via TwitPic in Twitter. First the body: 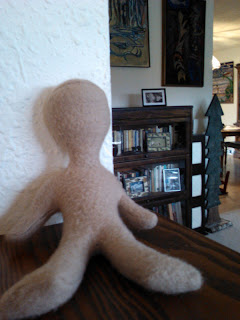 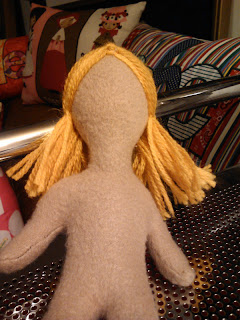 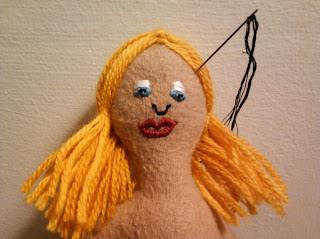 Eek! That was NOT what I envisioned. I chalked it up to a craftfail and took all the stitches out and started over. Here: 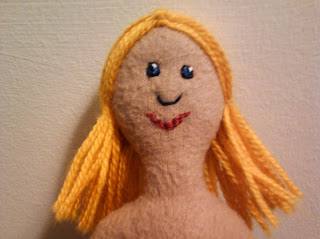 That's better.
It took a few days and some callouses on my fingers to cut out all the clothes, but I was happy to see that they fit well (at least on her front, the backside is a little drafty). 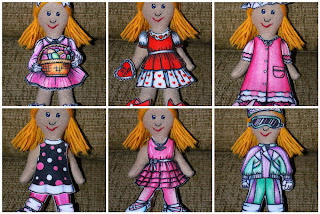 Yes, I am a grown woman and I play dress-up with my daughter's doll at 2 in the morning (when I do my best crafting). I was just making sure everything fit.  In the morning I showed McKenna her new toy which she named "Little Sis". She immediately began styling her. 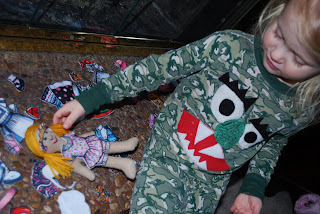 (Speaking of stylin' check out the hand-me-down monster pajamas on McKenna. I made them for Sage when he was her age.)
Here's another outfit she came up with: 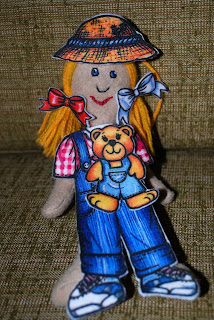 I just did a little Google sleuthing a found that the company that made these clothes is now called Story Time Felts and they sell the flat dolls plus ones you can personalize with your child's face, which are pretty cute.  I might have ordered one if I had seen them first, but then I would have never made this one, so I'm glad I didn't.
Posted by KB at 2:33 PM