Saturday night Erik and I got all gussied up and went to Disney's BOLT wrap party in downtown Hollywood. First was the screening at the Kodak Theater (home of the Oscars) (did you know the stars have to walk through a mall before the get to the actual theater? weird). The movie was awesome and in true Disney fashion I even got choked up at one point. If you see it, and you should, stay until the very end where they list the "Production Babies" and look for McKenna's name (at the top of the second column). Erik's name is in there somewhere too, but not with the babies. 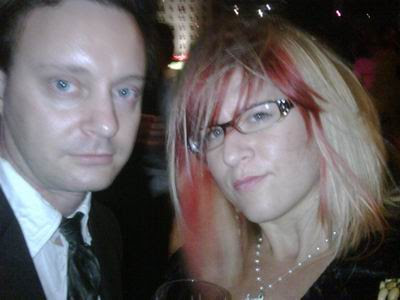 After the movie we went to the party upstairs for food, drinks, music, gambling, etc. I took that picture on the roof overlooking Hollywood Blvd. where there were a couple hundred people protesting Prop 8 (I'm with the NO crowd) and a bunch of police in riot gear. What a wild night! Like my hair? I got lots of compliments on it that night. I did it myself with a bottle of color from the 99cent store. I'm fancy cheap like that.

As soon as we got home (late) I had to pack my car full of kokoleo so I could leave for the Patchwork Indie Arts and Crafts Festival at 7:30 in the morning. Ugh. I made it though and had a great time. 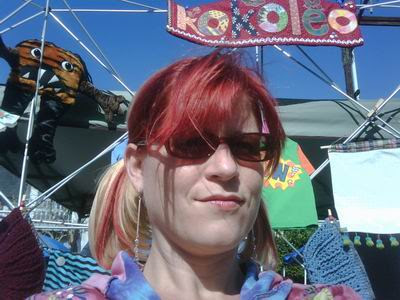 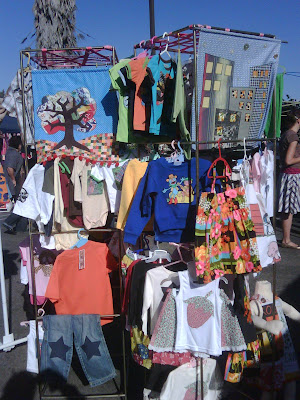 Sales were down in comparison to the Spring show. Other vendors agreed and we chalked it up to the sucky economy. But I managed to be busy the entire time and didn't sit down for 9 hours. I saw old vendor friends, sent some kokoleos out into the world, and came home with a lot more money that I went there with, so that was nice. 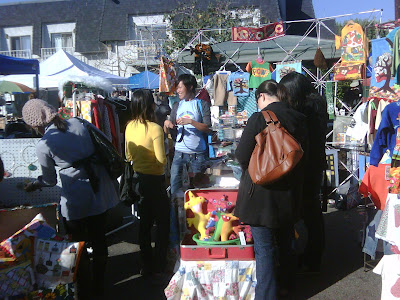 And next week I'm doing it again. Twice! Saturday I'll be at the Foundations School Community Harvest Festival and Sunday it's FELT CLUB. Wait, what am I doing here? I need to be in the studio making more stuff!
Posted by KB at 11:45 PM

My girl has been counting down till Bolt comes out for the last 6 months! I'm glad to hear that it's good.
I'm glad the show was good, your layout looks great and I envy your sunshine.
Good luck on your next shows!

I think the hair is smokin' HOT!!

it was so nice seeing you at the craft show, i almost missed it!! you inspired me to start sewing more, i am going to try to do some today! glad we live close, you never know, we might run in to eachother!