We all had a Yellow Submarine birthday party

A few months ago Sage discovered our Yellow Submarine DVD and was fascinated. When we asked him what kind of birthday party he wanted, he chose a "Yedow (his pronunciation) Submarine Birthday Party." We obliged. Here's the invitation Erik made: 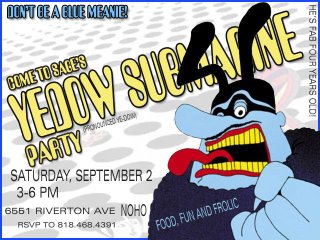 And I made the cake: 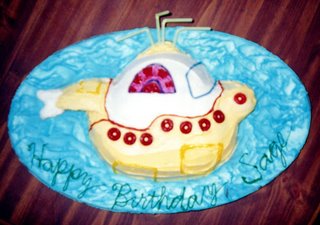 At Sage insistance we played "Pin the looker thingy on the Yellow Submarine": 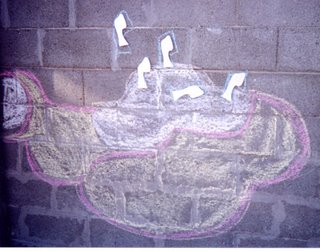 He also wanted to lead a marching band (which he did with his friends around our yard) and a have a pinata. Erik and I tried to make him one the night before but a few hours before the party was to start it was still soggy, so we went out and bought this one: 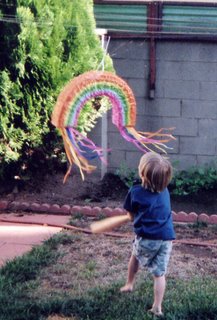 And here he is blowing our his candles: 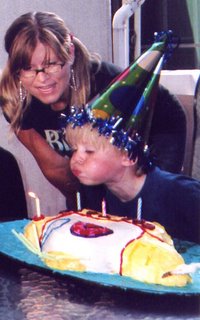 That night when I was getting him ready for bed, I noticed that he was practicing holding four fingers on his hand. He lifted one, then two, then three, and then slowly let the pinky go and stood there studying his four fingers. I said, "Hey Sage, How old are you now?" and he smiled and held up his hand and said, "Four!"
Posted by KB at 12:51 AM

This is a great site and I wanted to post a comment to let you know, great job! ...

I visited various sites except the audio feature for
audio songs current at this site is genuinely wonderful.

Hi to all, how is everything, I think every one is getting more from this site, and your
views are pleasant designed for new viewers.

Look into my blog ... Aimbot and Wallhack


My page - Aimbot and Wallhack

F*ckin' tremendous issues here. I am very satisfied to see your post. Thank you so much and i am having a look forward to touch you. Will you kindly drop me a mail?

excellent points altogether, you just gained
a new reader. What might you recommend about your publish that you made a
few days in the past? Any sure?

I've recently started a website, the information you offer on this site has helped me tremendously. Thank you for all of your time & work.

Have you ever considered creating an e-book or guest authoring on other websites?
I have a blog based upon on the same ideas you
discuss and would really like to have you share some stories/information.
I know my viewers would value your work. If you're even remotely interested, feel free to send me an e-mail.

Hi there it's me, I am also visiting this web site on a regular basis, this web site is in fact good and the users are really sharing fastidious thoughts.

Hello there, I discovered your website by way of Google whilst searching
for a comparable subject, your site came up, it seems great.
I have bookmarked it in my google bookmarks.
Hello there, just became aware of your blog via Google,
and found that it's truly informative. I am going to watch out for brussels. I'll be grateful should you proceed this in future.
A lot of other people will probably be benefited from your writing.
Cheers!

What's up, always i used to check weblog posts here early in the dawn, since i love to find out more and more.

My partner and I absolutely love your blog and find most of your post's to be precisely what I'm looking for.
Would you offer guest writers to write content in your case?
I wouldn't mind composing a post or elaborating on a number of the subjects you write with regards to here. Again, awesome web log!

Feel free to visit my web-site - virtapay to

Nice post. I learn something totally new and challenging on blogs I
stumbleupon every day. It's always useful to read through content from other writers and practice a little something from their web sites.

Feel free to surf to my web site: Naked Girls

Genuinely when someone doesn't understand then its up to other users that they will help, so here it happens.

Wonderful items from you, man. I have take note your stuff prior to and you're just extremely excellent. I really like what you've received right here, certainly like what you're stating and the way in which in which you say it. You are making it entertaining and you still take care of to keep it sensible. I can't wait to learn far more from you.
This is really a terrific website.

Thank you for the auspicious writeup. It if truth be told used
to be a amusement account it. Glance complex to more brought agreeable from you!

By the way, how can we communicate?

You actually make it seem so easy with your presentation but I find
this matter to be actually something which I think I would never understand.
It seems too complicated and extremely broad for me.

I'm looking forward for your next post, I will try to get the hang of it!

Here is my site ... linkbucks bot

Hi, Neat post. There is an issue together with your website in
web explorer, would check this� IE still is the market leader and a large portion of other people
will miss your great writing because of this problem.


Look into my web blog - aimbot for ps3

I must thank you for the efforts you have put in penning this blog.
I'm hoping to check out the same high-grade blog posts by you in the future as well. In fact, your creative writing abilities has motivated me to get my own, personal website now ;)

Take a look at my web site :: earn every day

I am really delighted to glance at this website posts which
contains tons of helpful information, thanks for providing such information.

Howdy! This blog post couldn't be written any better! Reading through this post reminds me of my previous roommate! He always kept talking about this. I'll send this post to him.

Fairly certain he will have a great read. I appreciate you for sharing!

Excellent way of explaining, and nice article to take information concerning my presentation
subject, which i am going to present in university.

I got this web site from my buddy who informed me concerning this website and at the moment this time
I am browsing this web site and reading very informative articles or reviews at this place.

An outstanding share! I've just forwarded this onto a friend who was conducting a little research on this. And he in fact ordered me lunch simply because I stumbled upon it for him... lol. So allow me to reword this.... Thank YOU for the meal!! But yeah, thanks for spending the time to discuss this subject here on your web site.

Hello, i feel that i noticed you visited my web site thus i
got here to return the choose?.I'm attempting to to find things to enhance my website!I guess its adequate to use a few of your concepts!!

I visited various sites but the audio quality for audio songs existing at this site is in fact superb.

You should be a part of a contest for one of the best sites on the net.
I am going to recommend this blog!

Feel free to surf to my blog ... Dubstep

Want To Increase Your ClickBank Banner Traffic And Commissions?