I sewed myself a SeaHawk!

is EVERYWHERE in Seattle. I really like it. As NFL logos go, I think we have one of the best. It's based on Pacific Northwest native art like this mask: 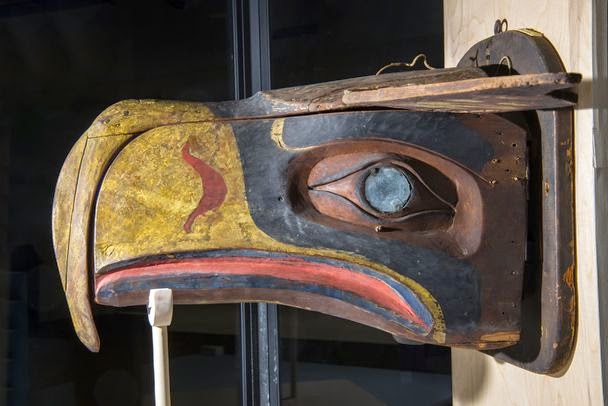 So, inspired by Pacific Northwest native art I've encountered since moving here in 2010, oh yeah, and also inspired by the Seahhawks first-ever SUPER BOWL WIN this year, I decided to make myself a Seahawk this Halloween. Hopefully it will come in handy when we celebrate more wins in the future.

Full disclosure:  I've never been a big football fan and neither has my husband. Last year though, we contracted Seahawk fever and I get it now. Suddenly we find ourselves having to be home on game days, on the edge of our seats shouting at the television to Go!Go!Go! I couldn't care less when any other team plays, but the Seahawks have my heart.

Sneak Peek: I'm not saying it's magic, but I put it on at the end of Sundays game against the Carolina Panthers and within a minute the Seahawks scored a tie-breaking touchdown. The next week they won again. Coincidence? 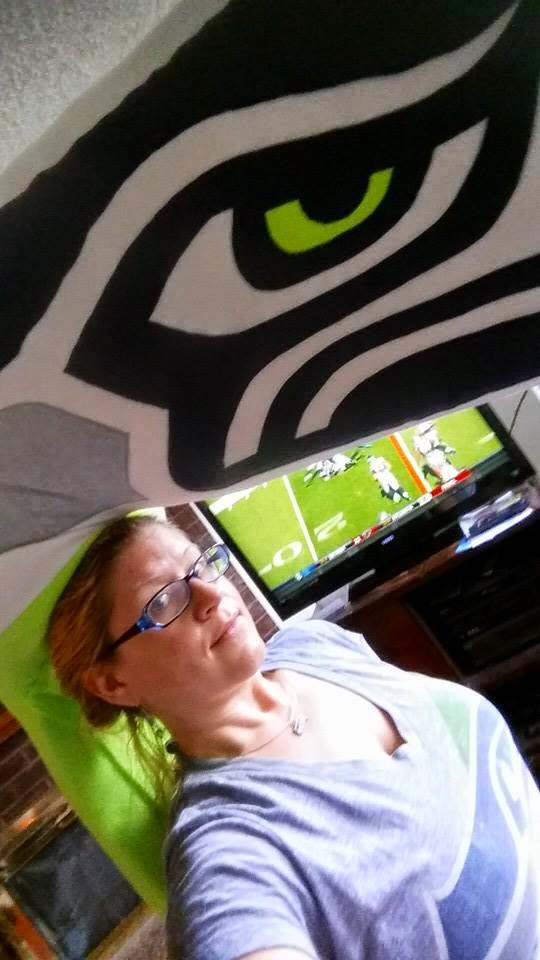 Maybe, but I like to think it's the power of the 12th Man infused in my hawk-head that helped.

I'm getting ahead of myself though. First I want to show you how I made it. I will title this tutorial:

How to Make Yourself the Most Popular Person in Seattle, in 157 Complicated Steps.

First, (fingers crossed the NFL doesn't sue me) I took the logo into Photoshop, made it grayscale, brightened it, and enlarged it 725%. 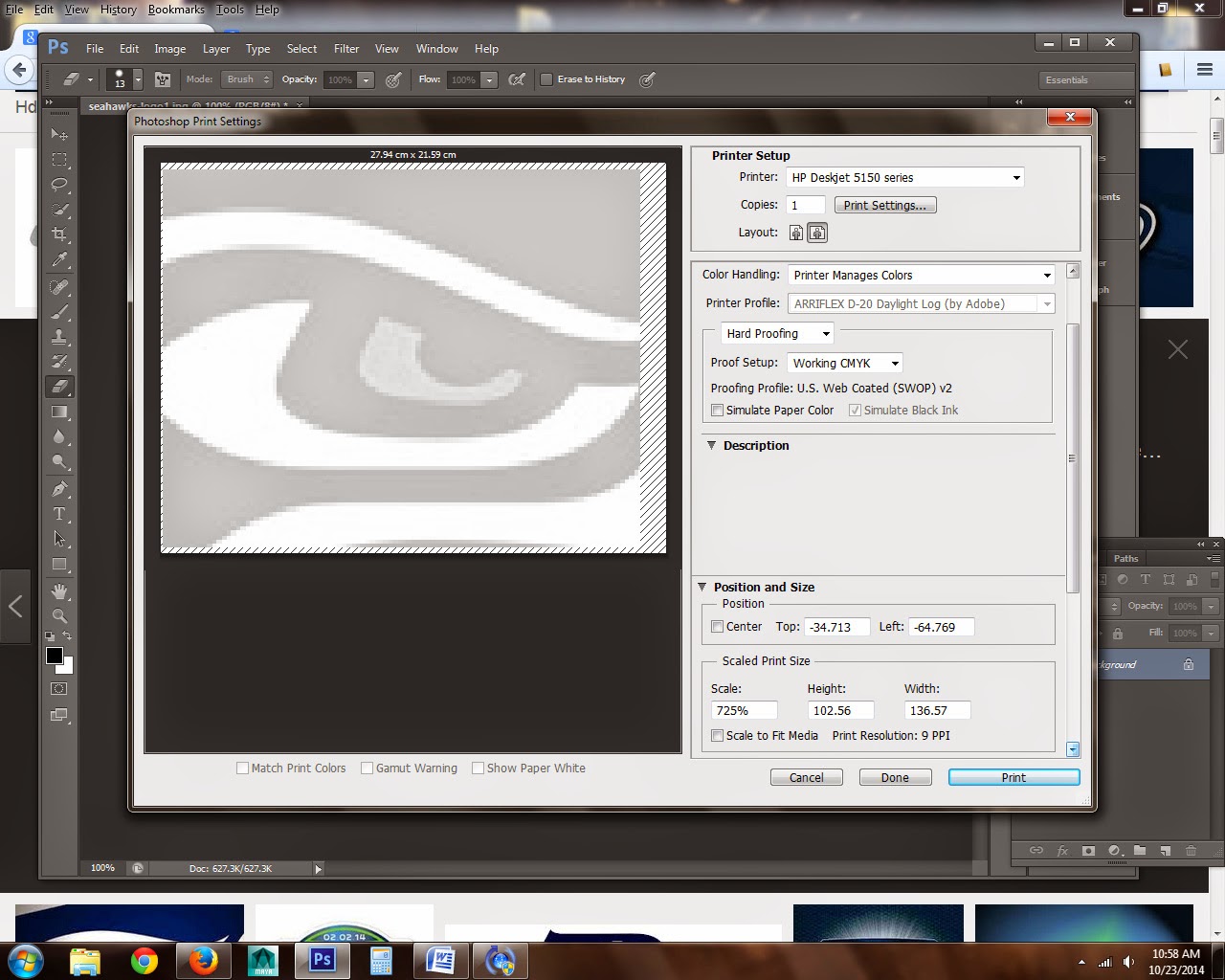 Then I printed it out section by section, pieced it together like a puzzle, and pasted the pages together to be my pattern.

Next, I put my pattern on top of 2 layers of dark blue fleece and cut out the shape of the head and beak... 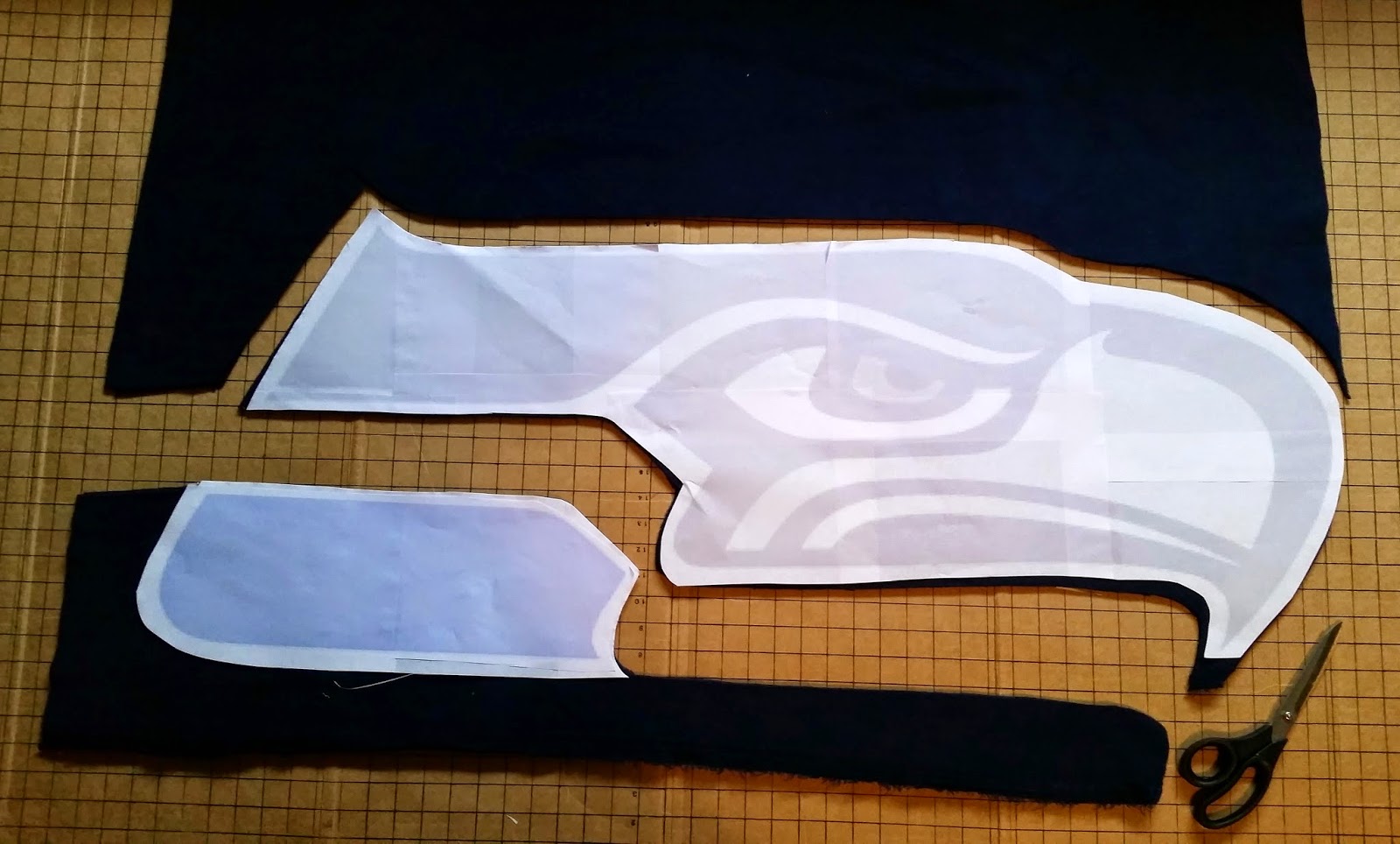 and cut out 2 layers of grey fleece for the neck. Later I cut out 2 green eyes. 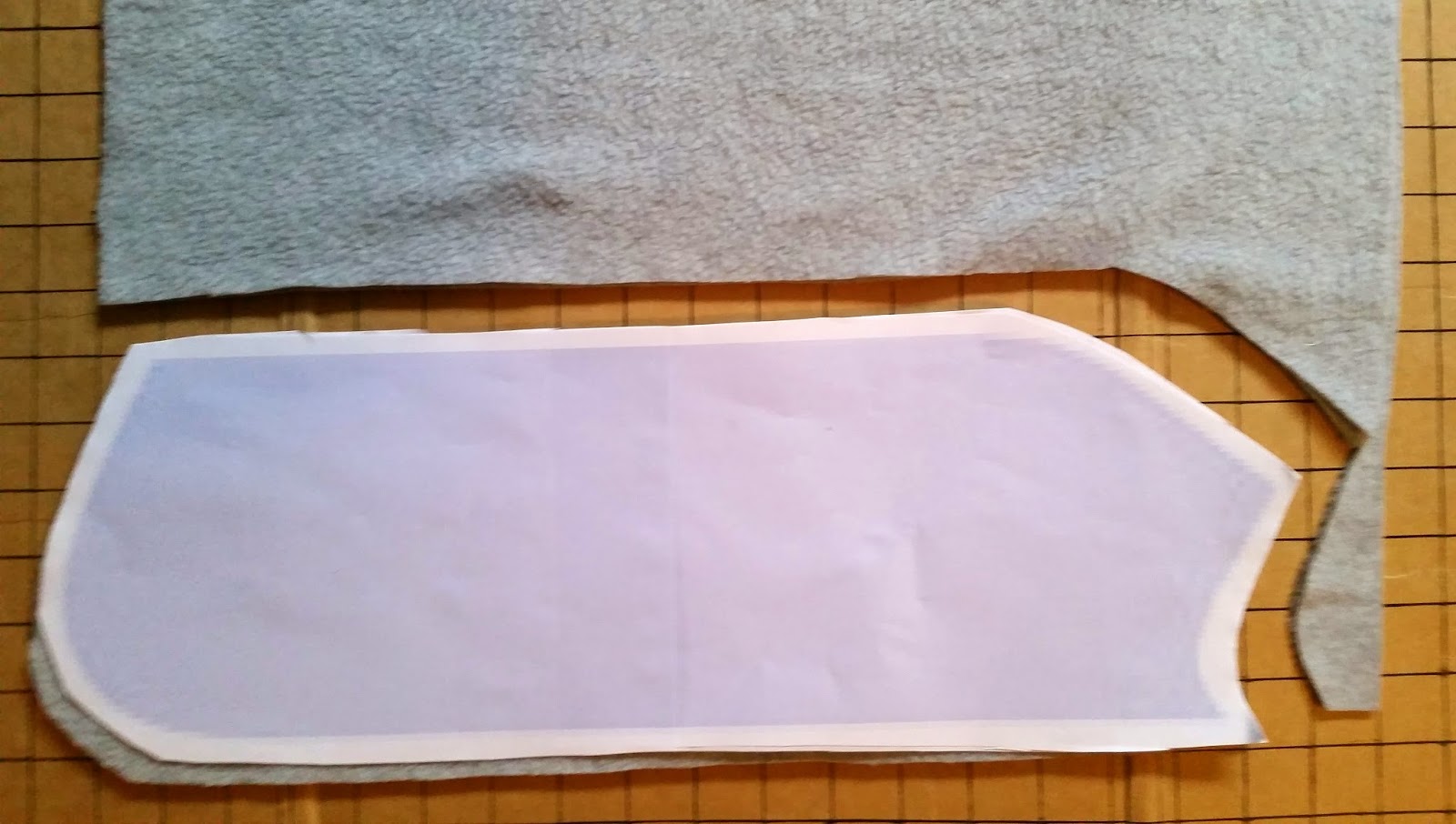 Then I ironed Heat n Bond Lite to the backs of each piece.  DO NOT iron fleece directly. To prevent burning and melting the fleece always cover your fleece with thin cotton fabric before ironing. 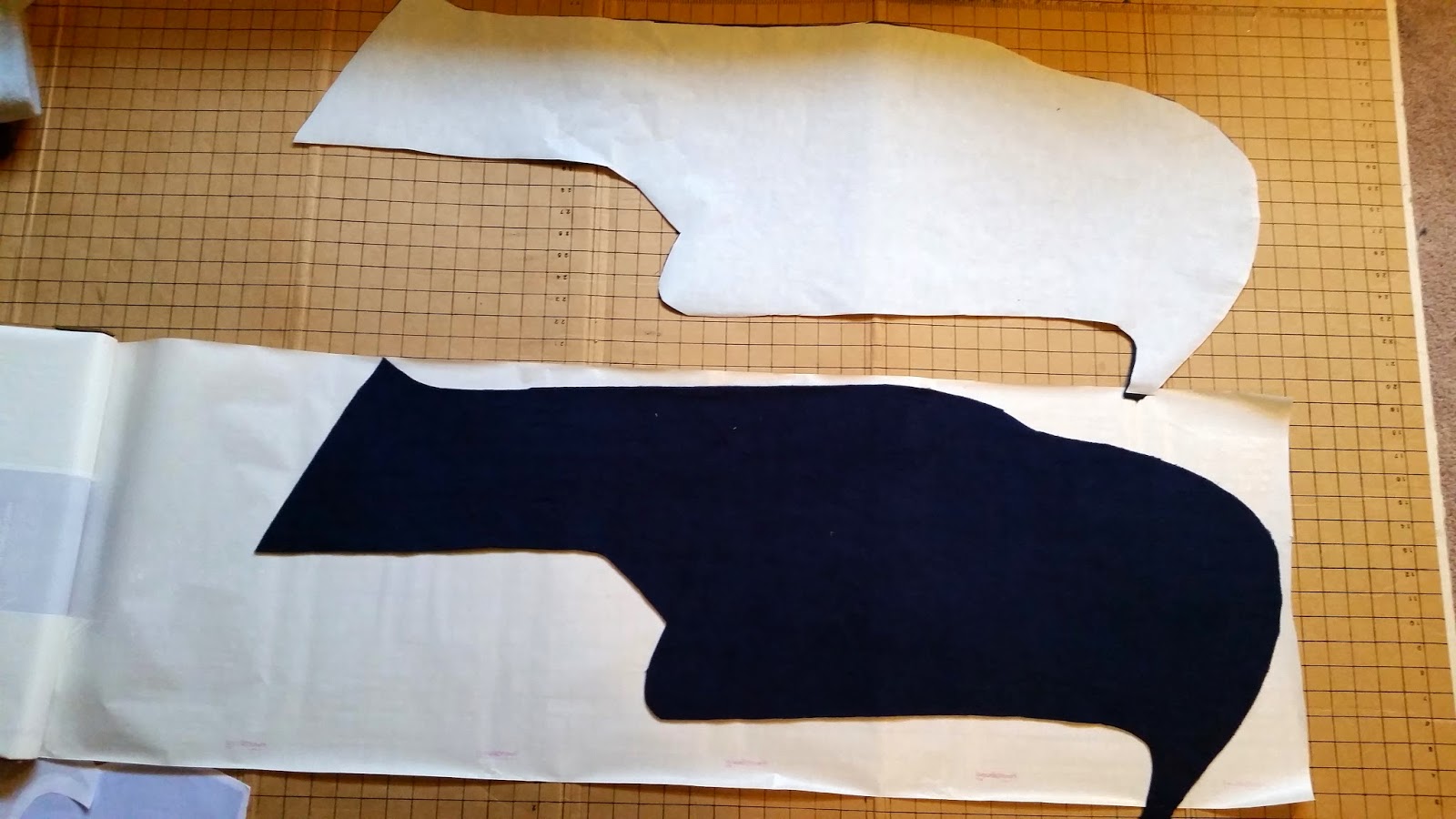 Here are both layers of the blue and grey fleece with Heat n Bond paper adhered. This paper makes it much easier to cut out the details.

Next, I pinned the pattern to both layers of fleece and cut out the details. 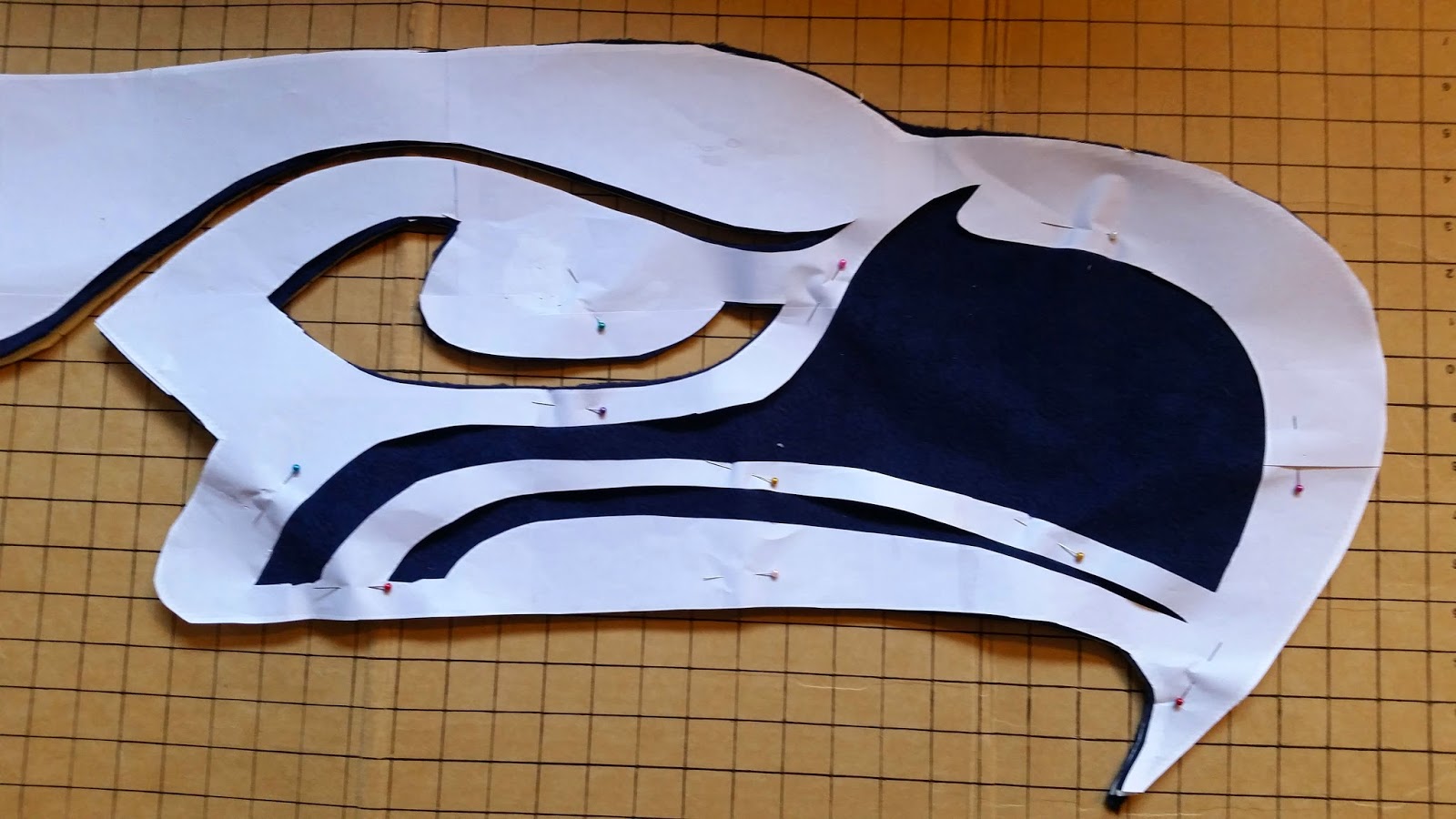 I suppose an Exacto knife or rotary cutter would come in handy here, but I didn't have one available so I just used scissors.  After several years and several hundred personalized banners, pillows, etc., I have plenty of practice doing this. 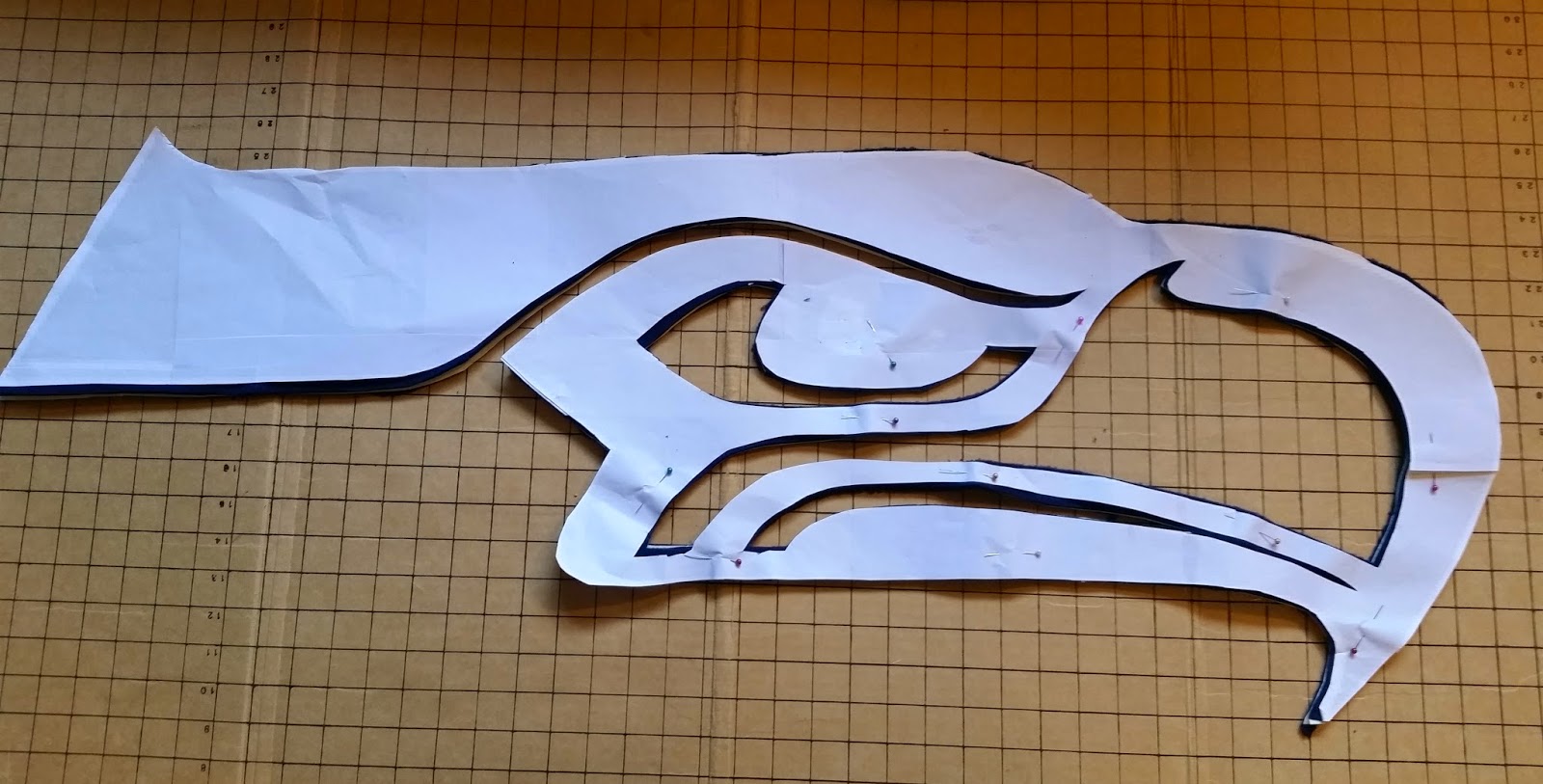 After I cut out all the parts, I ironed them onto a white background (again using a thin sheet of cotton fabric between my iron and the fleece). 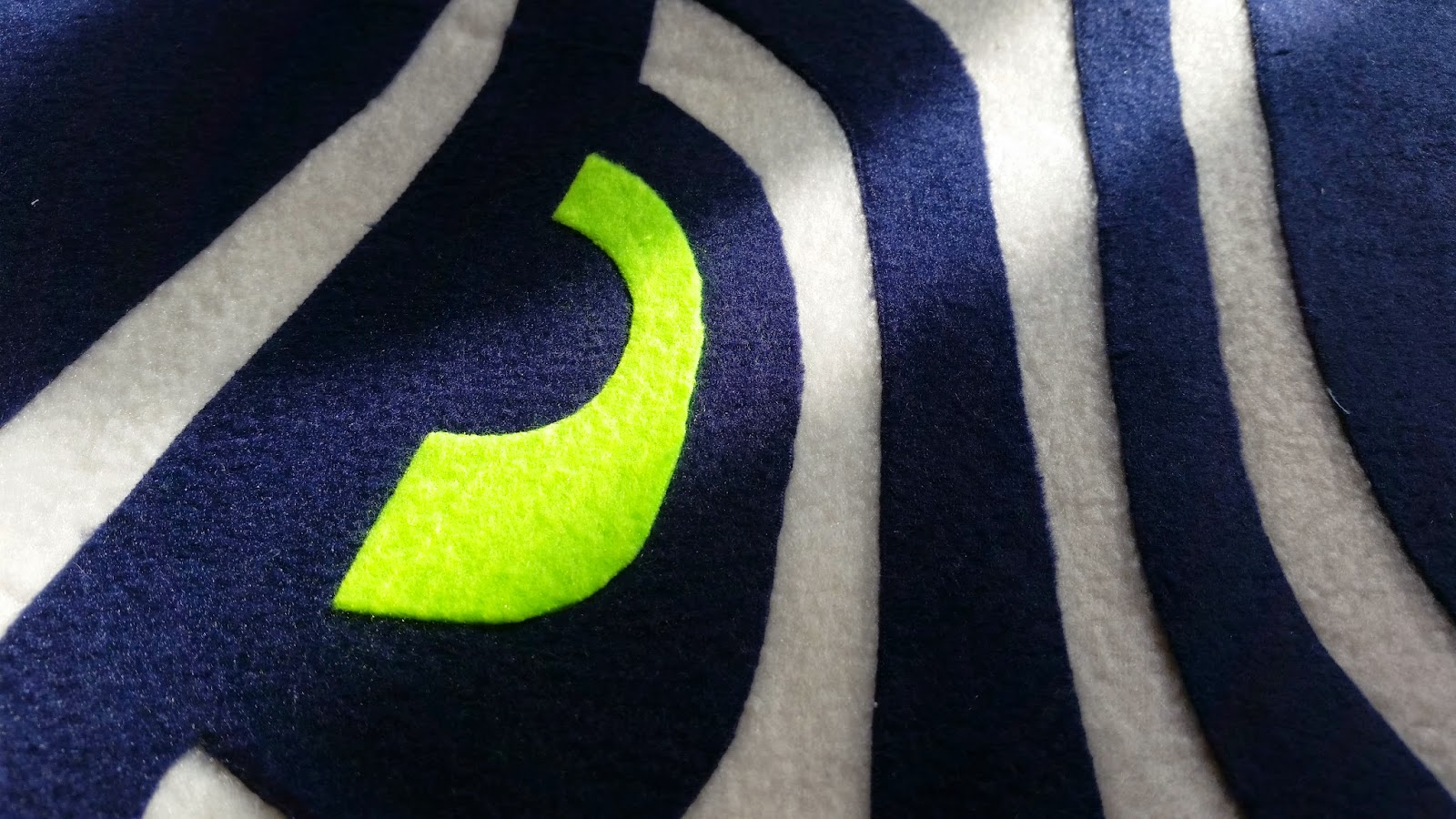 Next, I machine-embroidered the edges of my appliqued fabric using a zig-zag stitch (width 5, length 1). 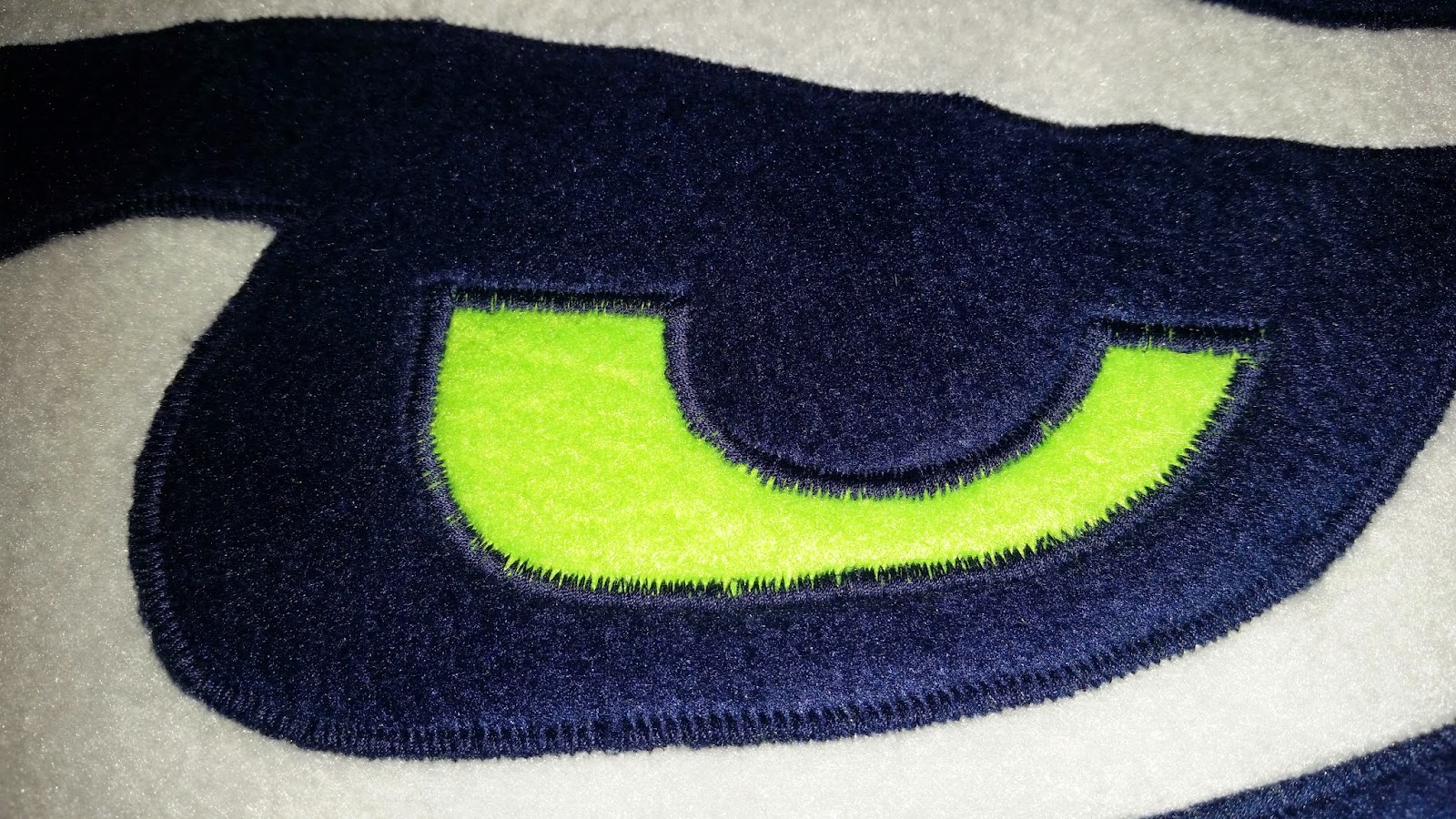 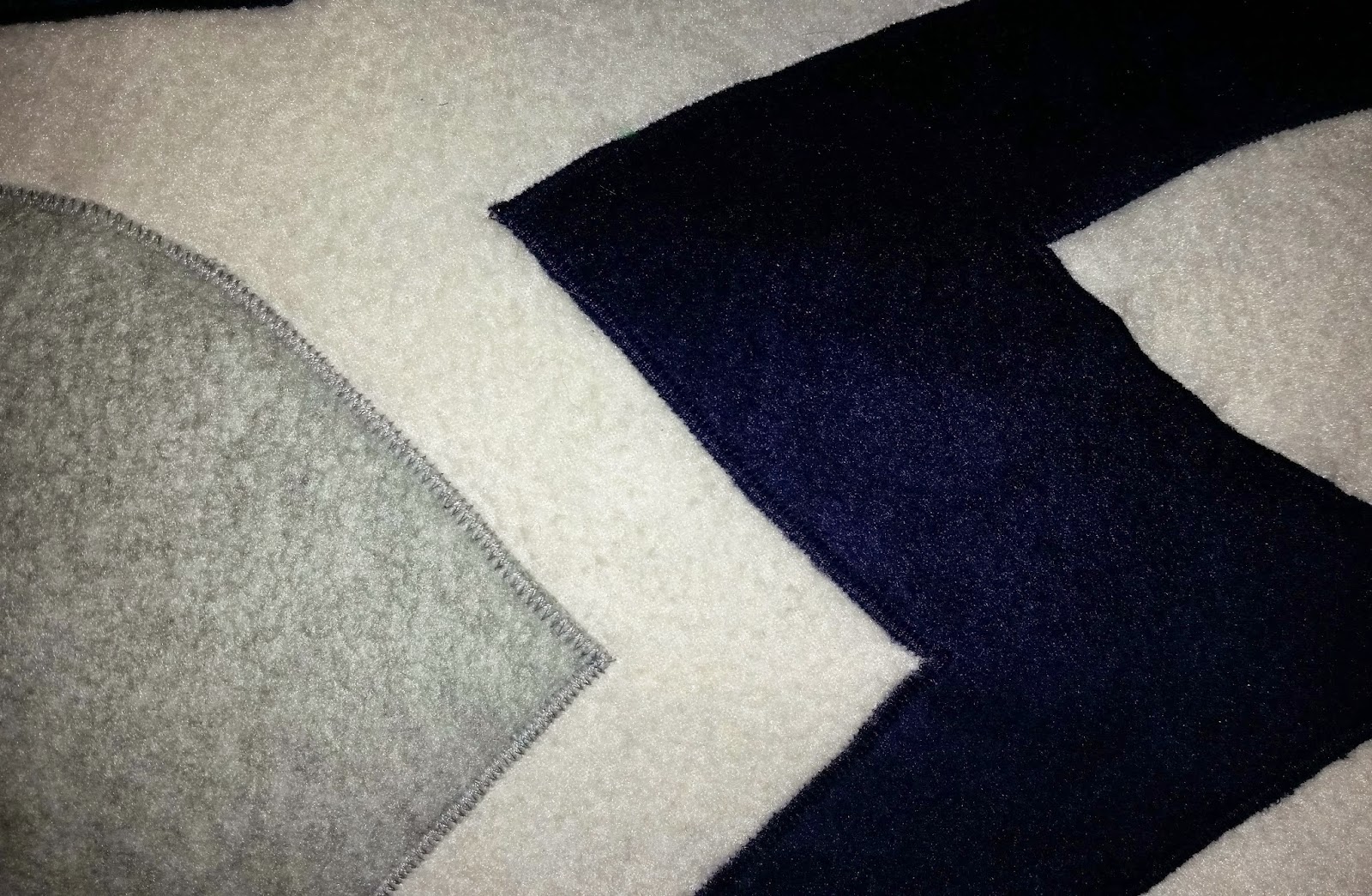 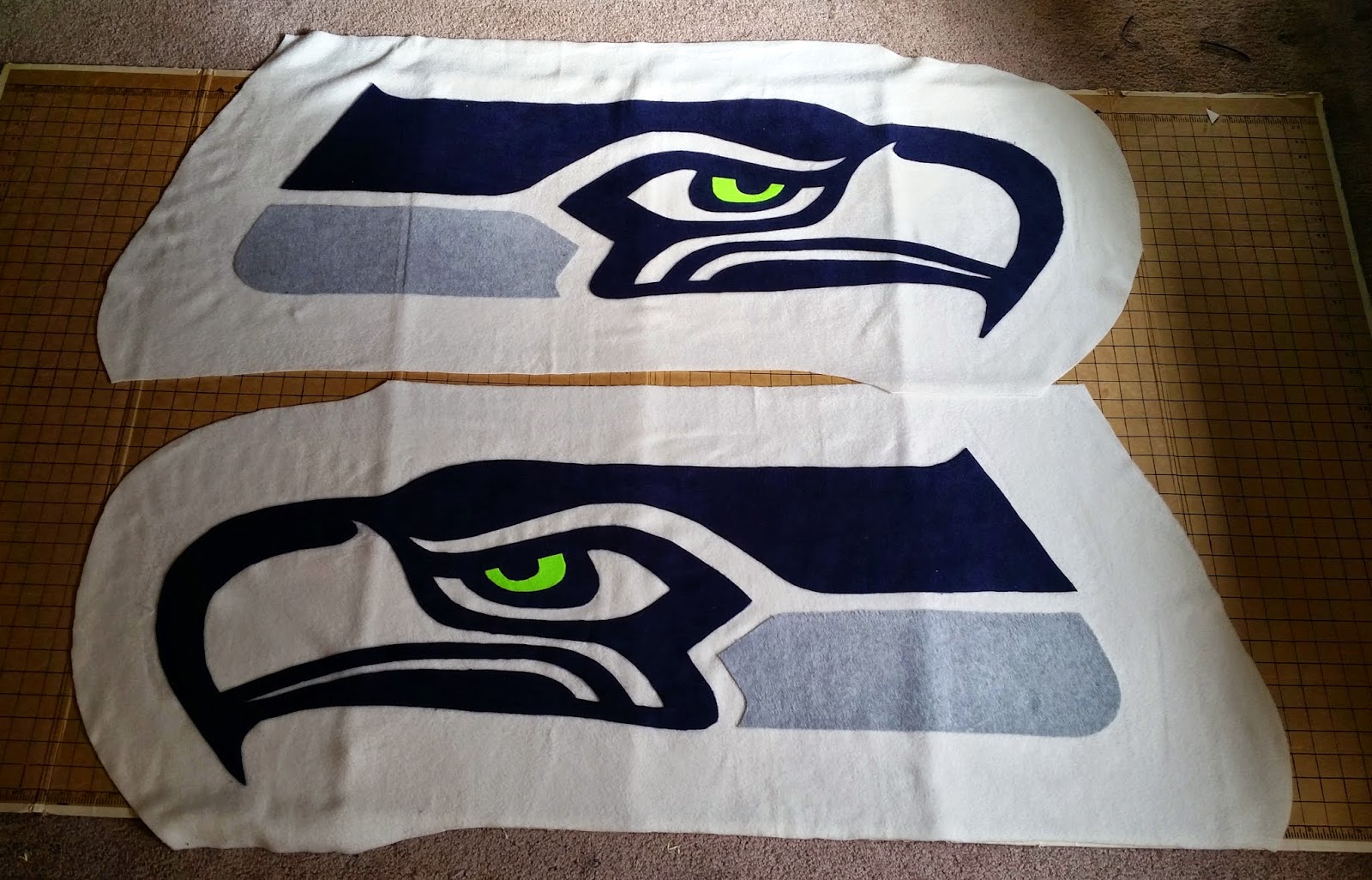 Then I had myself two 4-feet long appliqued Seahawk heads. I put the two pieces atop one another, outsides facing in, lined up their beaks and back, and straight-stitched around the outside edge leaving the neck-area open. THAT was the easy part.

Here is the part where I start to wing it.

I've seen many elaborate native Pacific Northwest masks in museums and marveled at both the art and engineering that native people put into these. How did they get a big heavy beak to balance atop their heads without falling forward?  When I cut my inch-thick foam in the shape of a hawk head and placed it atop my head it was all floppy.

I had to give it bones. I needed something strong and lightweight and found an old political yard sign in our garage. I cut it into strips and glued them together on both sides and hot-glued them onto my foam. My hawk-head is now reinforced with the bones of our governor's yard signs. 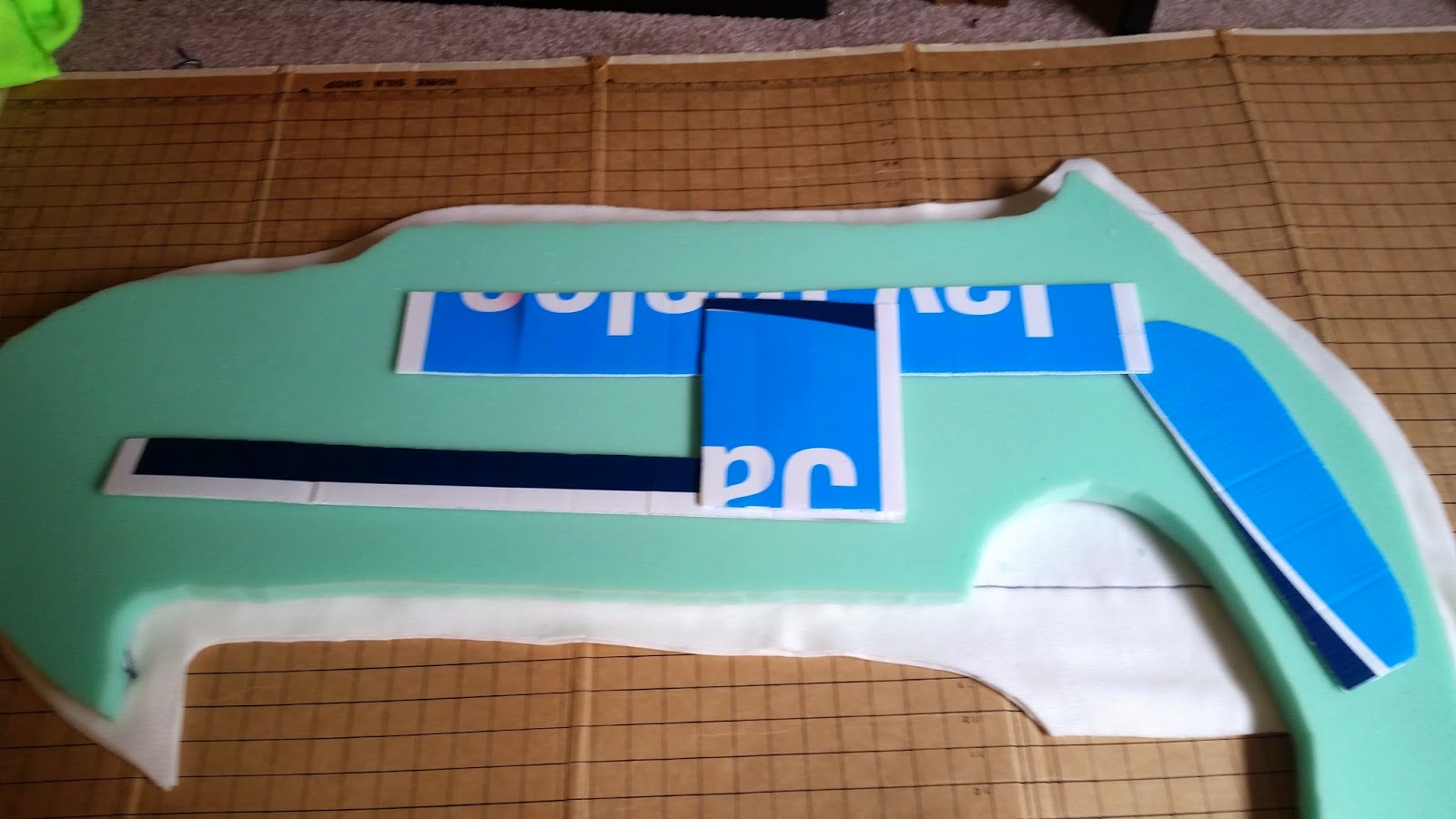 Next, so there wouldn't be any sharp parts poking through and to reinforce it even more, I hot glued a layer of batting overtop. 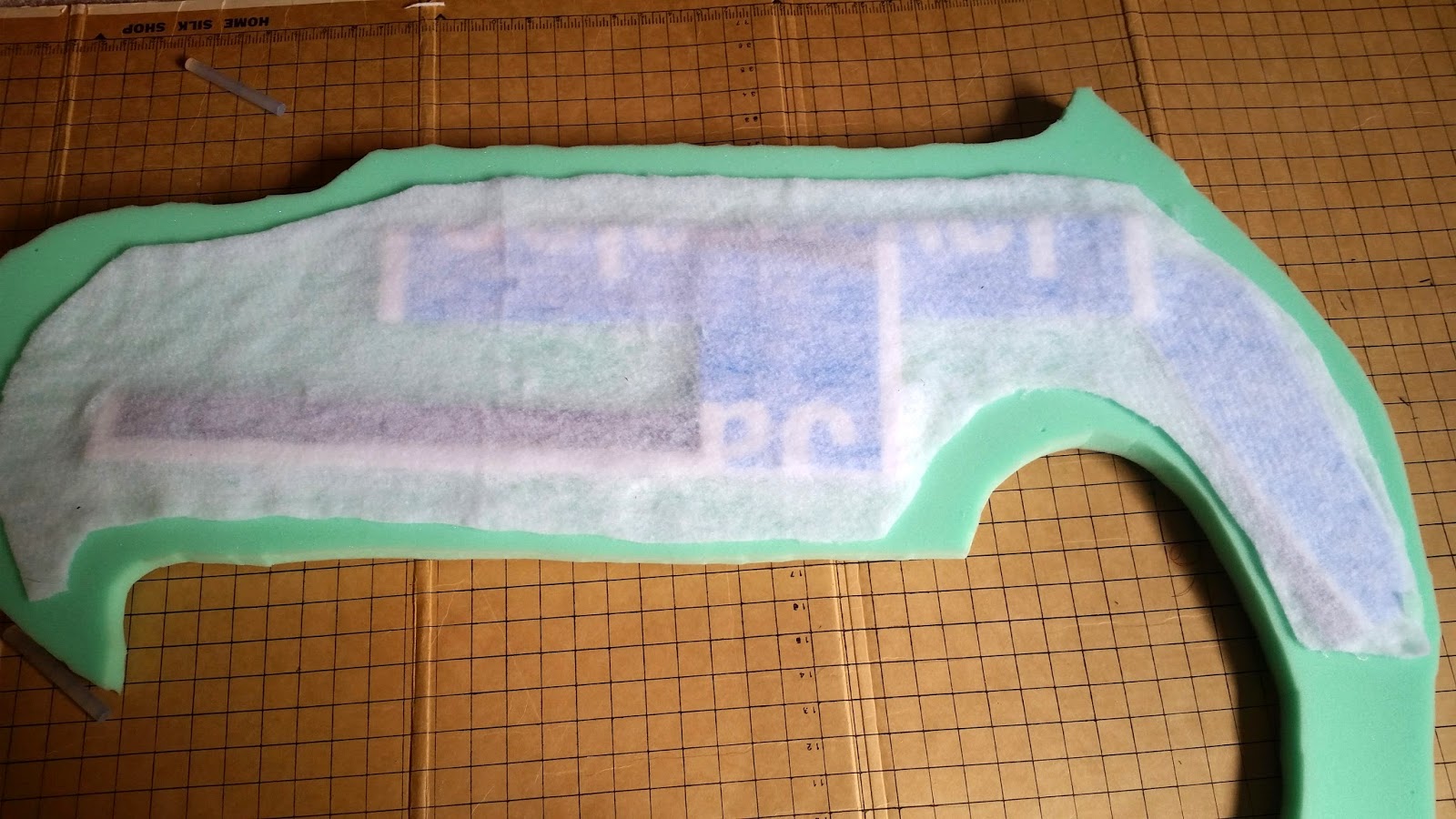 Side note, it looks like a gun, doesn't it? Ironically, the day I spent in my studio working on this  Pacific Northwest-inspired gun-shaped costume, I was listening to the local news report the latest school shooting unfolding less than an hour from my house. A Native American boy from the local Tulaplip tribe purposefully shot and killed 3 friends at his lunch table, and then shot and killed himself.  I really hate guns. But I digress...

Then I cut out 2 semi-circle shapes of foam and hand-stitched them to the space I cut out for my head to go. 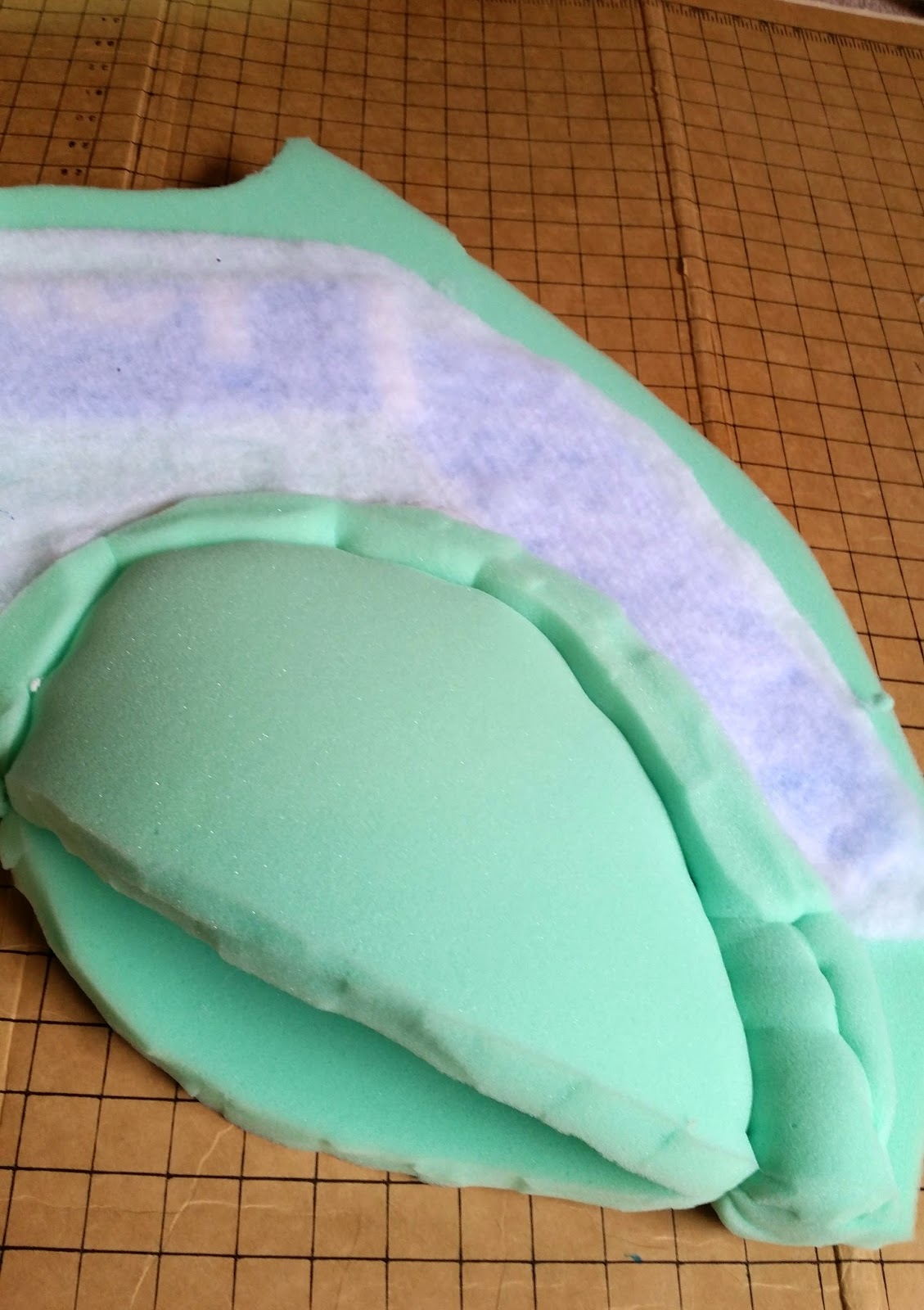 and carefully turned the appliqued Seahawk face(s) right-side-out and inserted my foam structure. 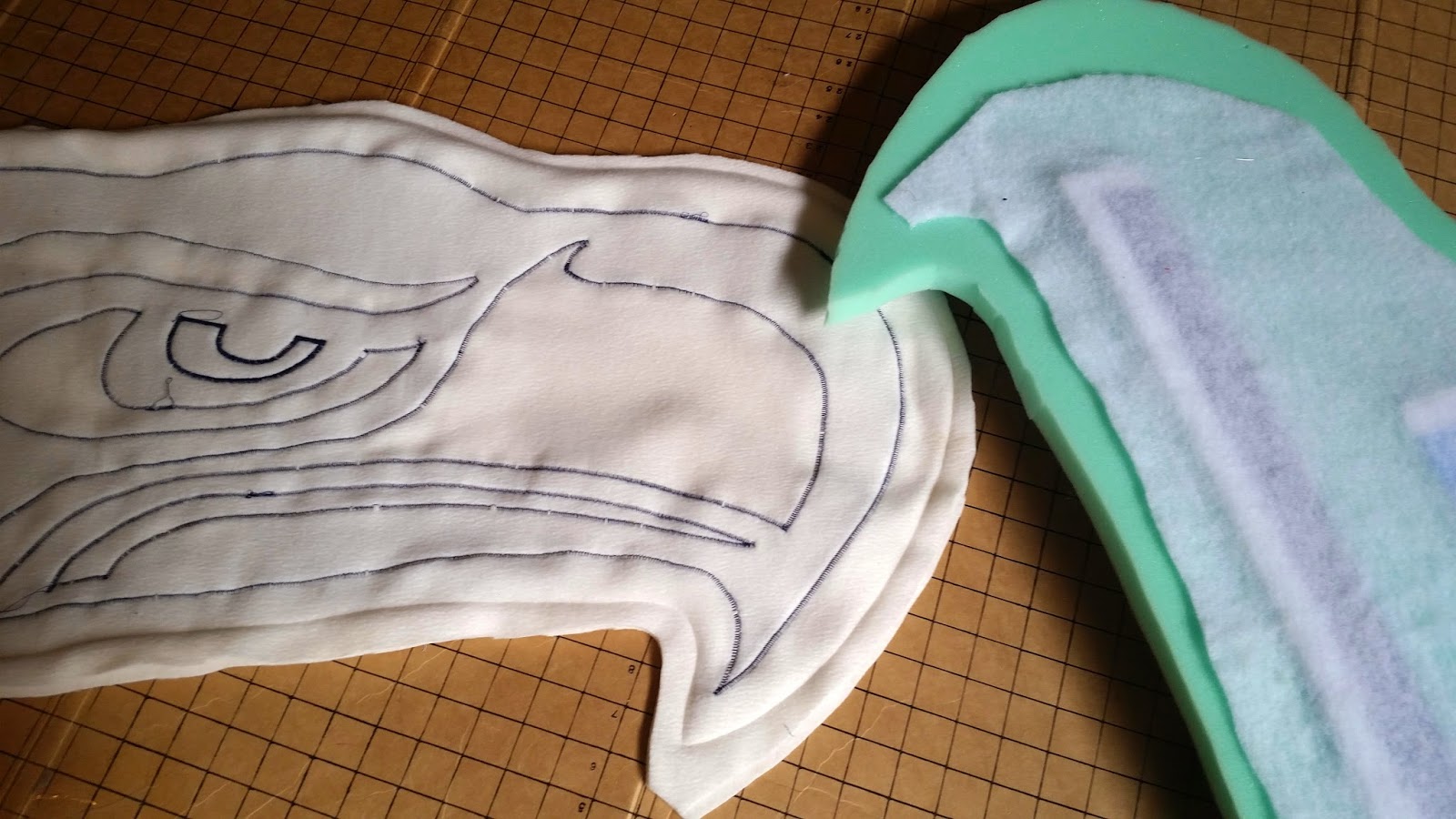 After trying it on, I realized there was no way it could simply be a hat. I needed some sort of harness to counter-weigh the heaviness of the protruding beak. After much trial and error, I decided to hand-stitch a rectangle of foam to the back of the head and machine-stitch some green fleece to the bottom of my appliqued Seahawk to cover up the foam. I also filled in the area around the head space with several handfulls of Polyfil. Here's a bird's eye view of the underneath: 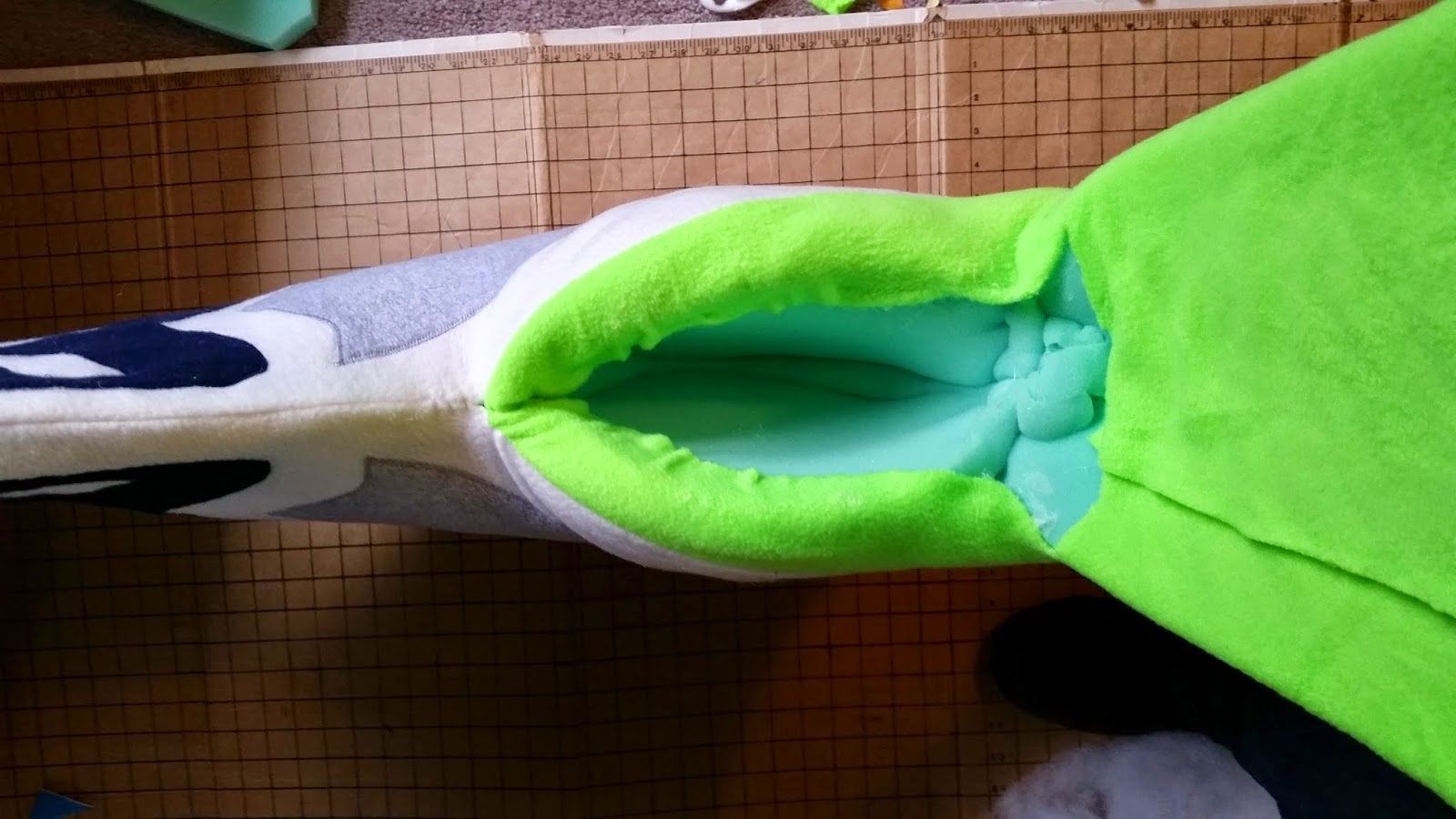 The head-hole proved too deep though - it pressed down on my glasses and ears when I tried to wear it - so I filled it with more Polyfil and hand-stitched a piece of fleece to cover it. 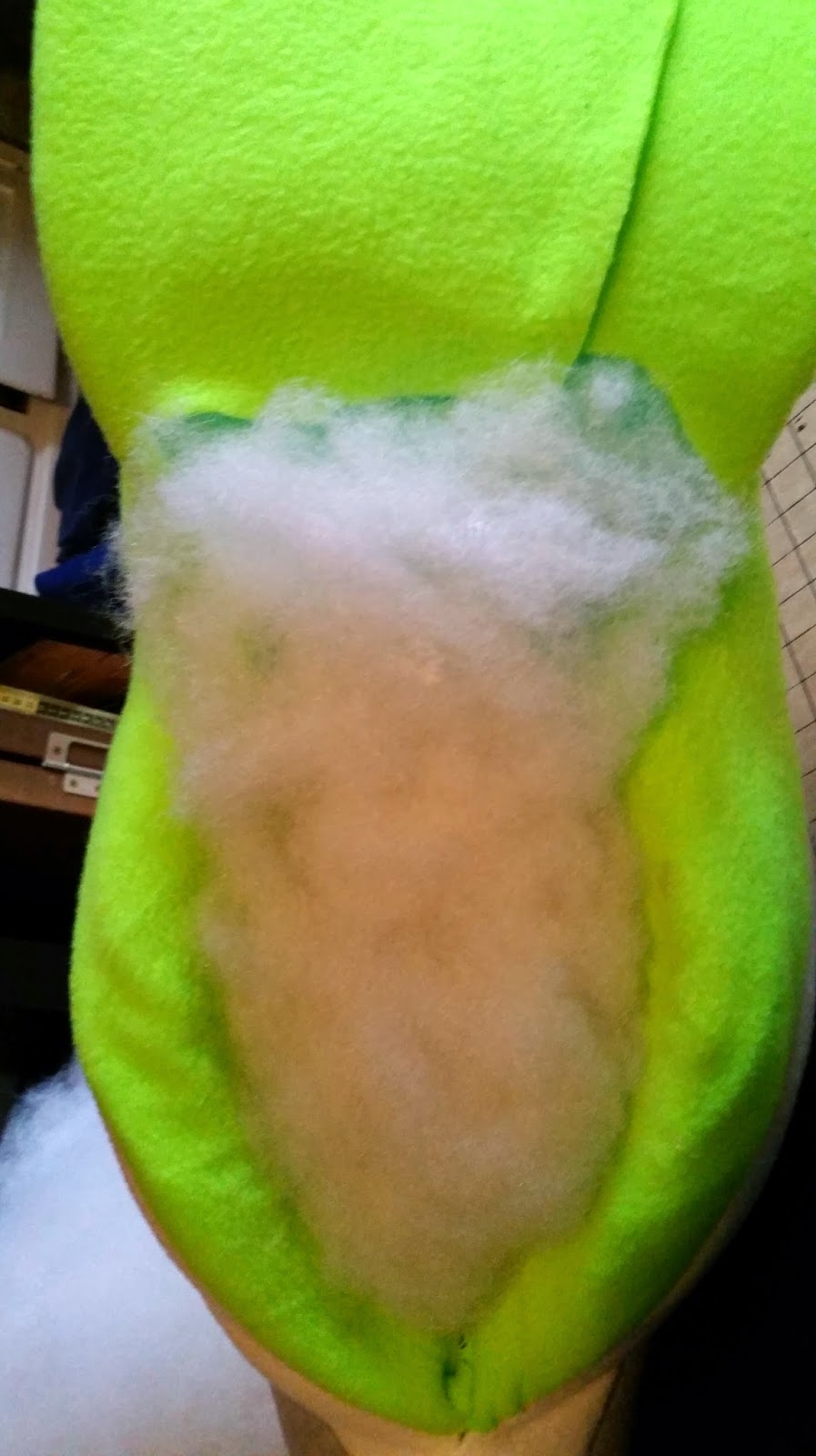 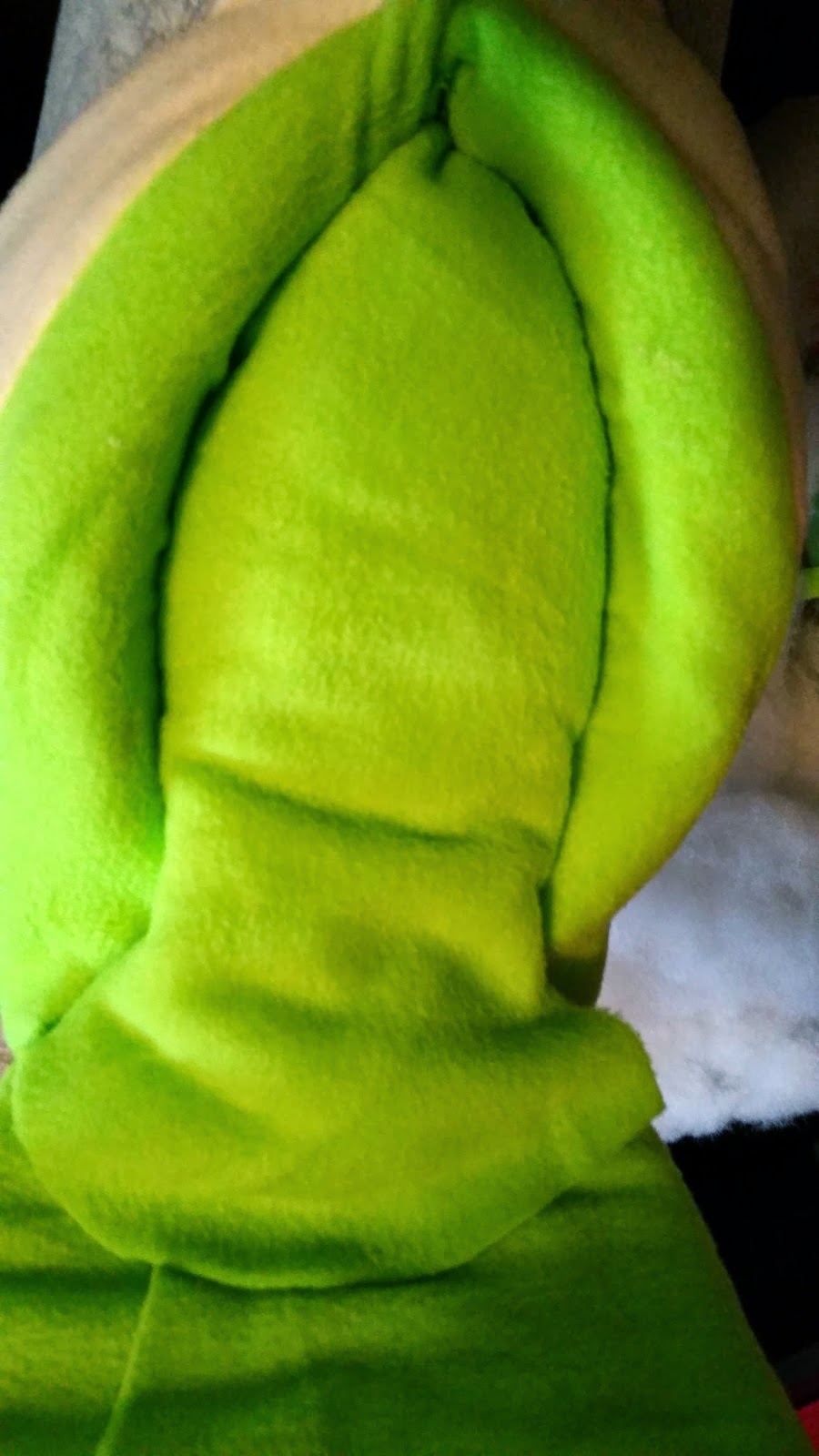 So now it sits comfortably atop my noggin. 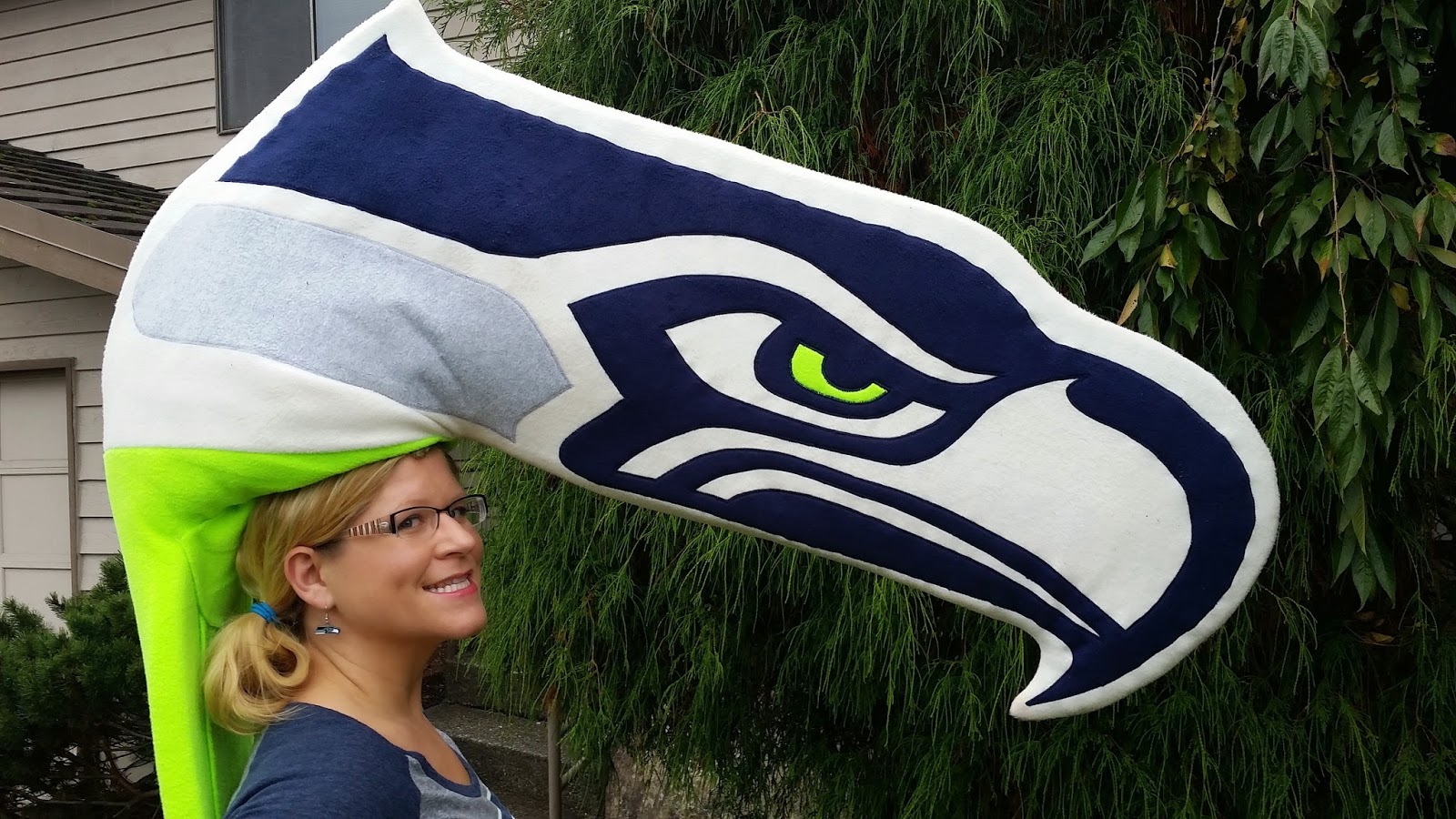 It's harnessed through slots in the back with a karate belt I got a garage sale years ago (thinking I'd use it for tote bag straps someday). It just so happened to be green and blue and wrap around my waist 3 times perfectly, so I stitched on a strip of velcro at the ends to secure it and viola! I finally achieved a comfortable fit! 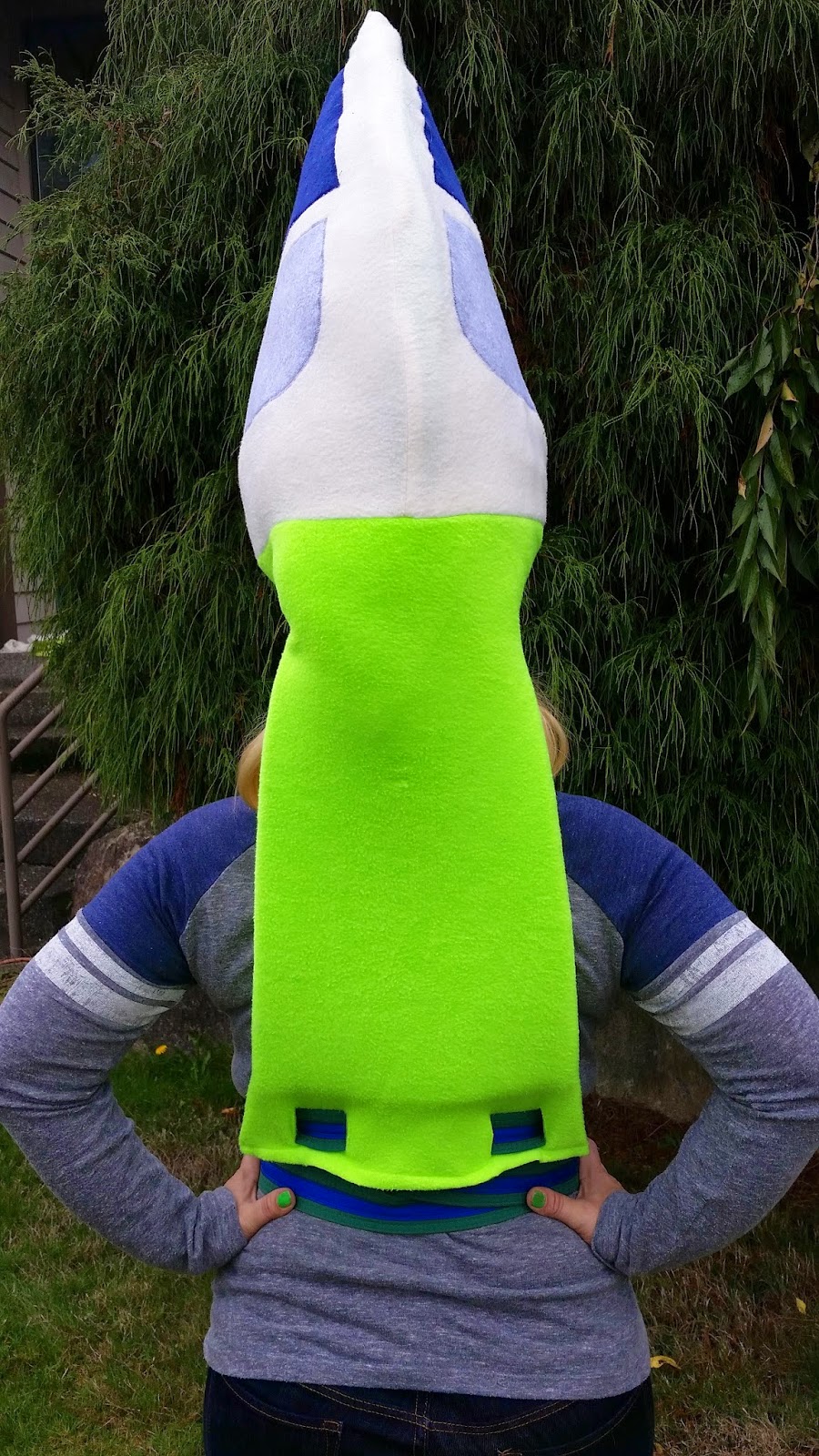 I wore it for our downtown trick-or-treating and got lots of honks and waves and GO HAWKS! and kids wanting to take their picture with me. My kids wore their Spy vs. Spy costumes I made last year and together we looked like a mama and her baby birds. Here's a pic I took of the 3 of us in the mirrored window of a tattoo shop. 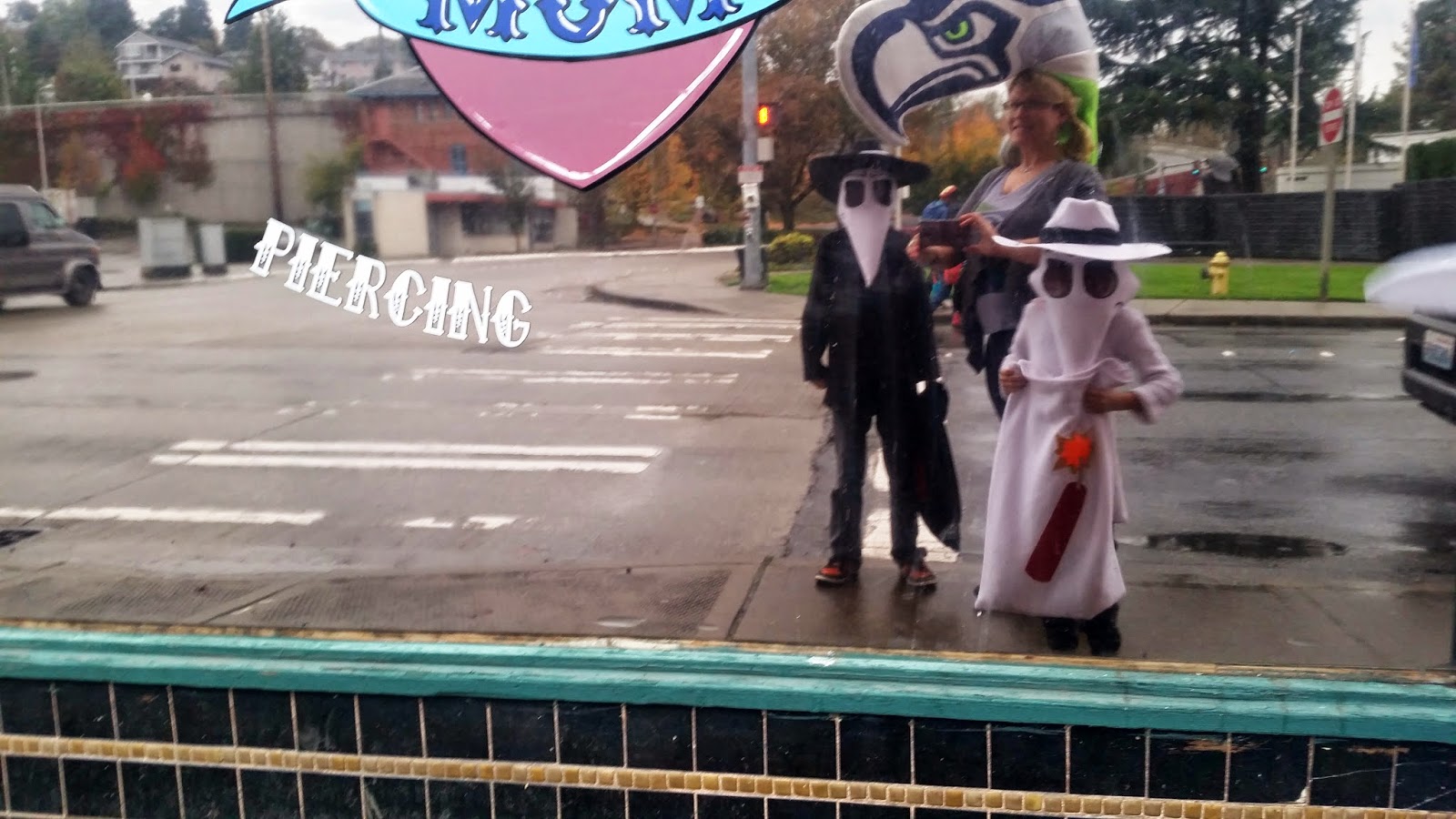 Maybe next year I'll make a full-bodied suit to go with it.  For now, I simply I threw on a fringed poncho sweater I found that looked like wings and added some see-through sparkly fabric for the body. I folded the sparkly fabric over once at the edge and straight-stitched a channel, inserted some skinny elastic and put both ends of the elastic through a button. 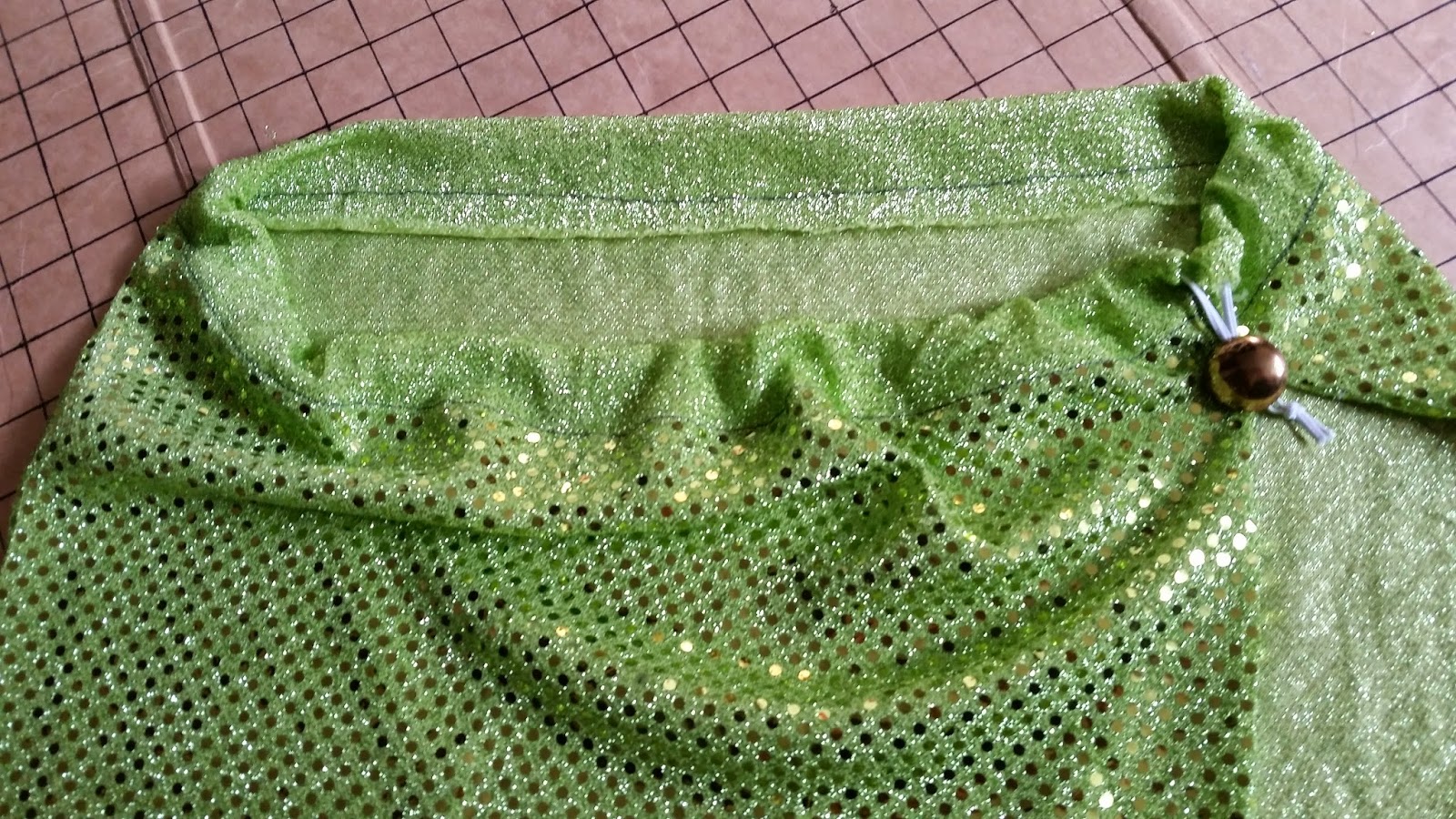 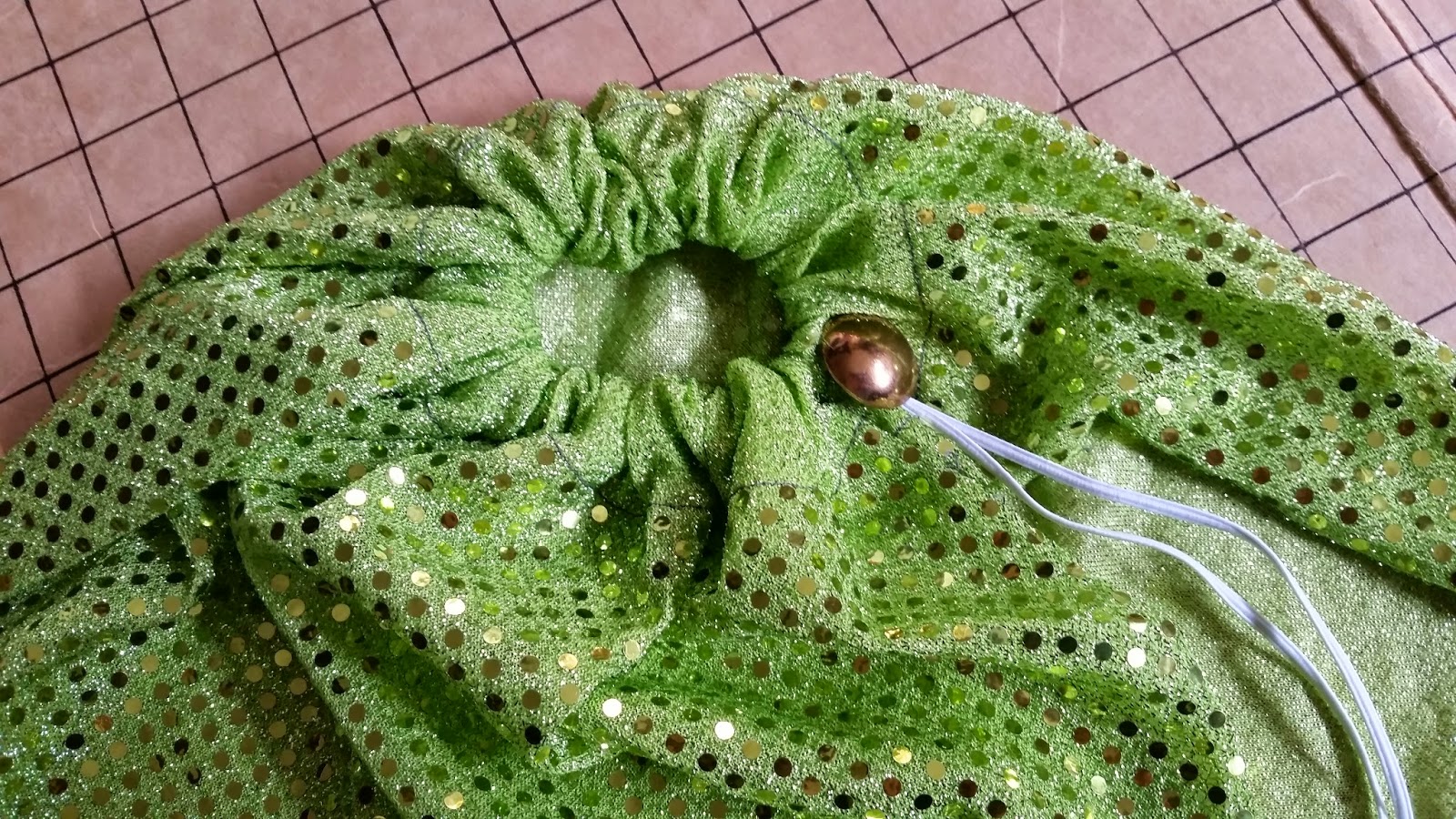 This way, I can pull the elastic through the button and gather the fabric atop my head, or loosen the elastic and let the fabric drape down in front and show my face. I wish all my costume-bodies came together this quickly and easily! 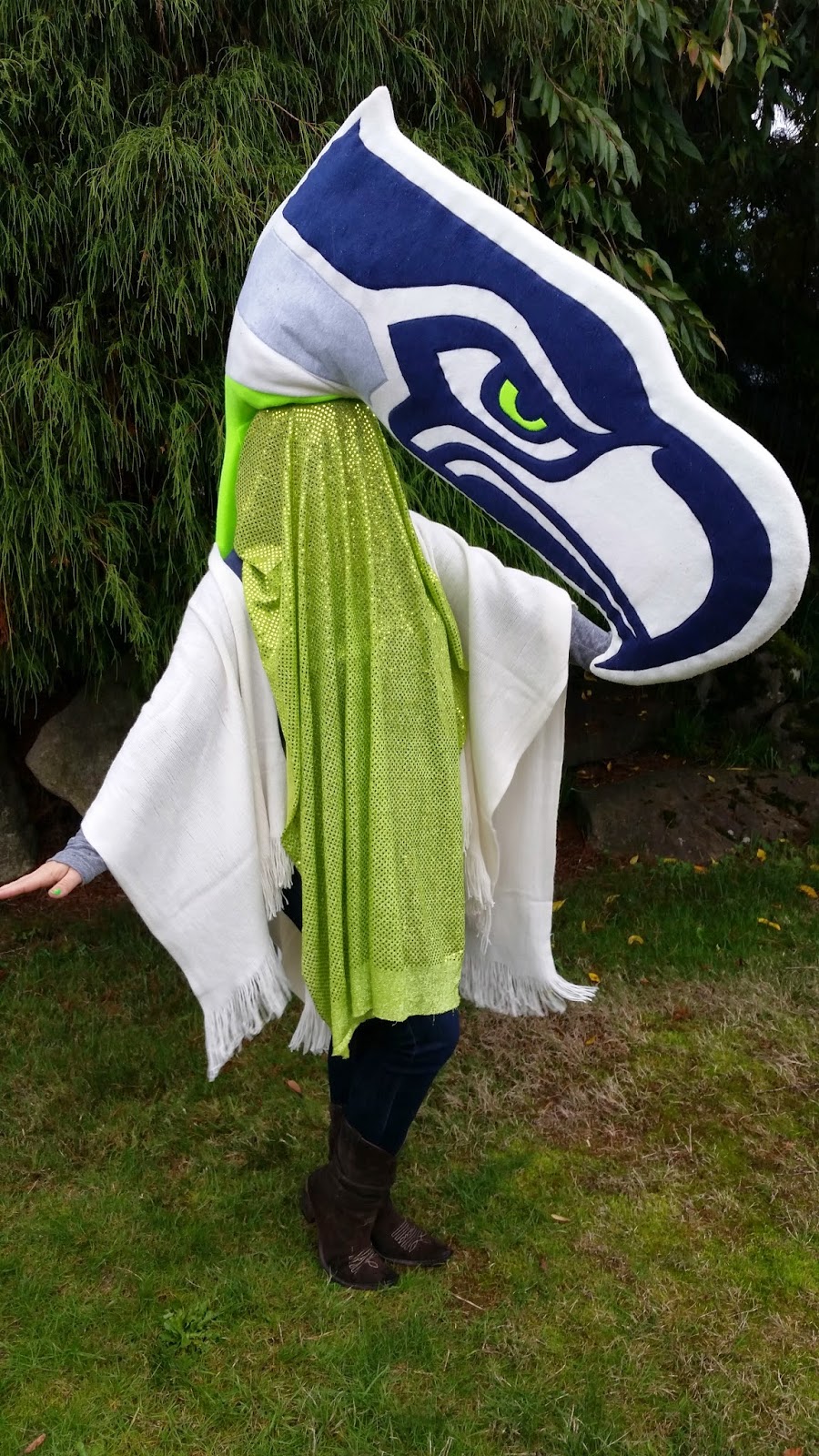 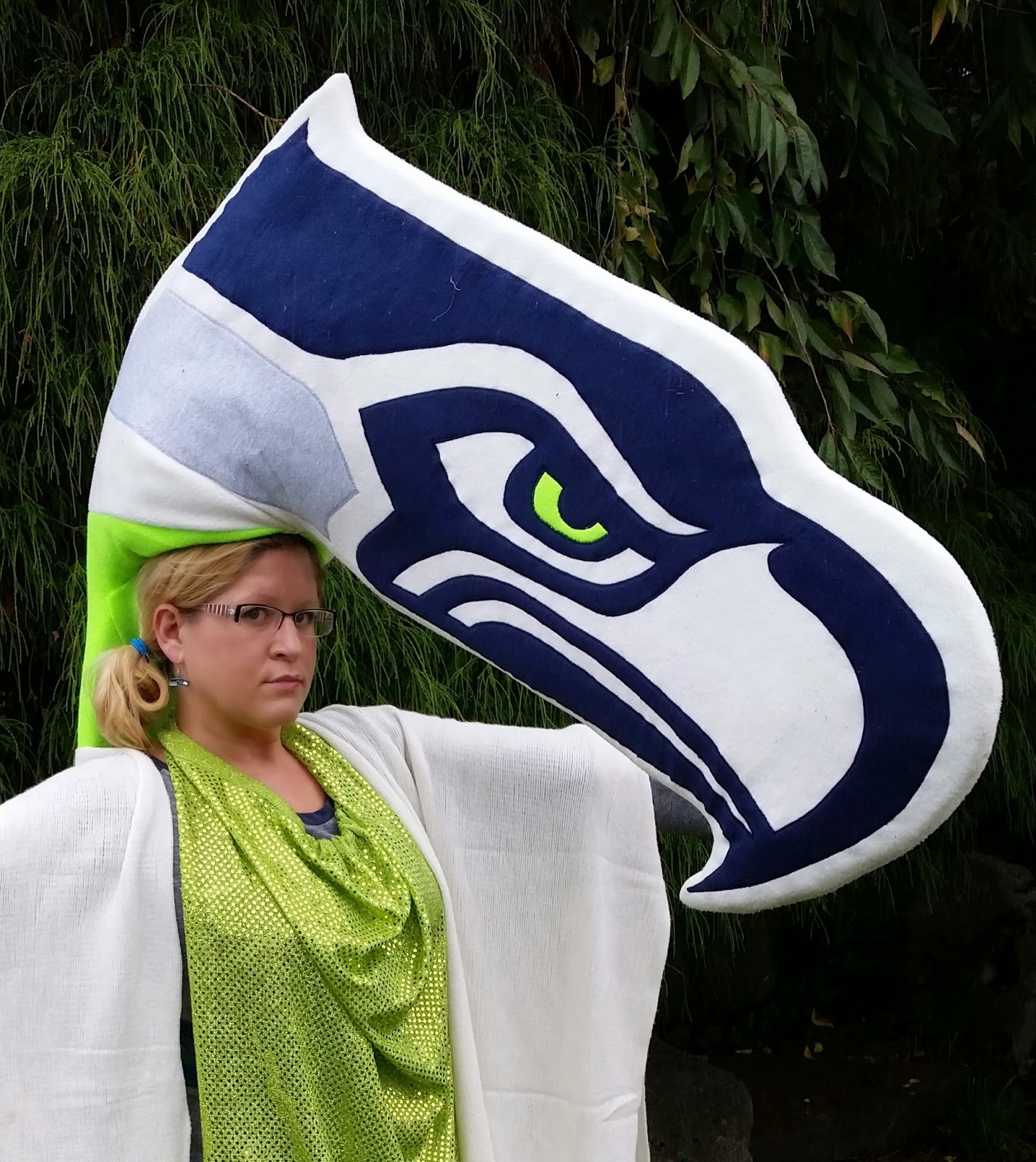 This year my kids have decided to forgo the duo theme they've had going the last 3 years as Finn and Jake, Mordecai and Rigby, and Spy vs. Spy. Sage wants to be an oldskool Gameboy and McKenna wants to be a My Little Pony. I hope I can crank them out in time.
Posted by Unknown at 1:00 PM