How to Make a Jake from Adventure Time Costume

In my previous post, I showed you how to do a Finn costume. Today I'll show you how to make Jake.

First, measure the wearer's shoulder width plus the length from the top of their head to mid-thigh, then cut 2 pieces of yellow fleece in those dimensions, rounding at the top.

Next, cut a long strip of fleece for the outside edge of the costume and reinforce it with 2 pieces of thick fusible web in the middle. You could also use cardboard. You'll need something sturdy to shape it in a dome above the head instead of letting it drape limply. 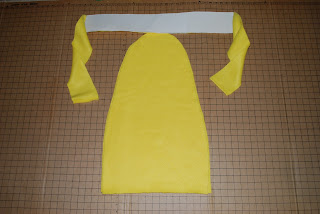 Starting at the midpoint of the long fleece piece and the top of one of the body pieces, sew 3/8 inch along the edge. 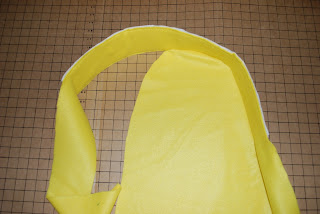 Next, go back to the top of the head and sew along the other side. 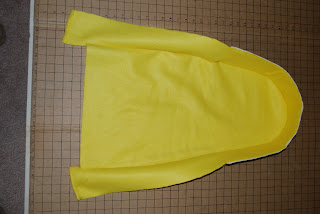 Sew on the back body piece in the same manner. 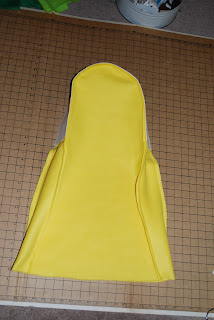 Next, have the wearer try on the costume and carefully mark where to cut the face and armholes. Have them take it off and cut those holes. Try it back on to adjust.

Hem at the bottom and insert elastic to gather it into a bubble shape. 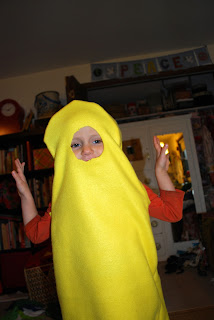 Now, for the face:

For the ears, cut 2 long oval yellow fleece pieces. Stitch them together and cut an opening on one side. Turn inside-out and stitch or glue it to the top of the head. 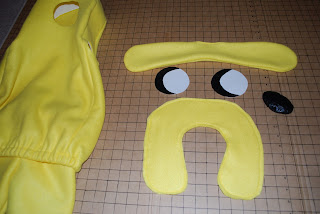 For the cheeks, cut 2 U shaped yellow fleece pieces in a size that will fit around your face hole. Stitch together and cut an opening on one side. Turn inside-out and stuff with polyfil. Stitch it around the face hole. 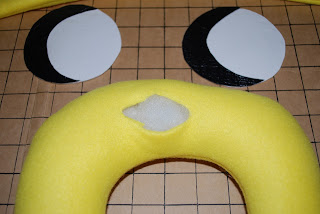 For the nose, cut a black 2 black ovals (I used black vinyl). Place right sides together and sew. Cut an opening in the back, turn inside-out and and stuff with a small amount of polyfil. Stitch or glue it to the cheeks above the face hole. 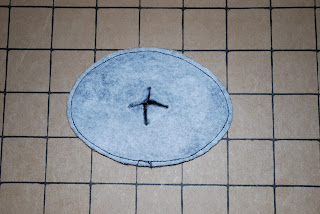 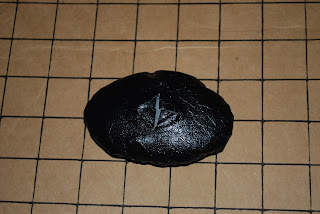 For the eyes, cut 2 white circles and 2 black crescents. (I used vinyl reinforced with thick fusible webbing). Glue the black crescent to the white eyeball circle. Insert them behind the cheeks and glue. 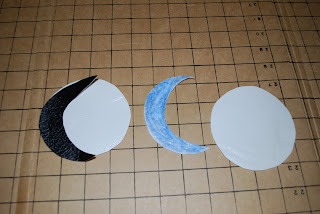 Hand-stitch black double-folded bias tape around the mouth/face hole and hand-stitch or glue 3 white teeth on top (I used vinyl). 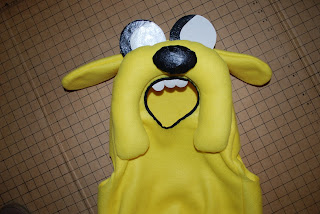 Next, make a pair of yellow fleece pants. 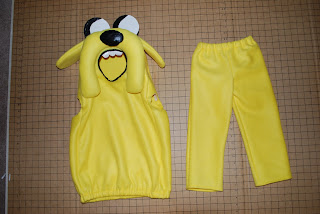 You can leave the armholes open if you have a long-sleeved shirt to wear underneath, or you can sew on some yellow fleece sleeves. My daughter insisted it needed sleeves so I added them at the end. I also stitched some 3-fingered paws to each sleeve cuff.

I planned to leave the armholes open and have McKenna simply wear a yellow long-sleeved shirt, 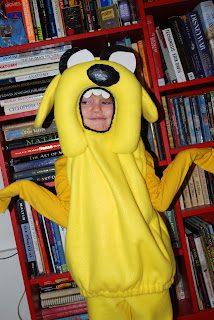 but after she tried it on she said she thought I should sew on some real arms. Critic! But she was right. 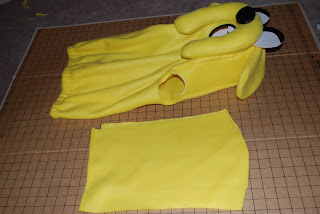 This step would be better to do before you stitch on the face.  I also stitched some 3-fingered paws to each sleeve cuff. 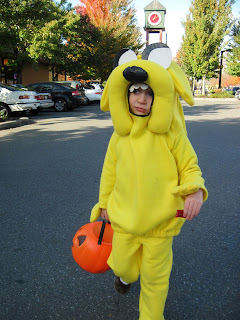 Don't forget to add a stubby tail to the back of the body. 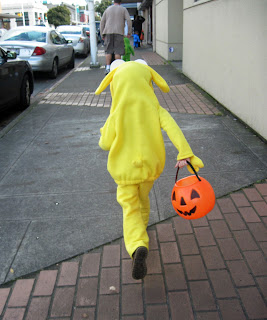 And don't forget to BE AWESOME!
Posted by Unknown at 9:33 PM

I don't really wanna make one, but I would rather buy one,
Do you possibly know where I could get one?

this is exactly what i was looking for, thank so much : )

So algabraic, do you have any idea how to make jack-stlye booties? Like little yellow covers for a kid's shoes? That would help so much! :D

Do you sell these or are you willing to sell that one. I'm already making a lady rainicorn, beamo and Finn. Thanks!

I like what you guys are up too. This kind of clever work and reporting!
Keep up the wonderful works guys I've incorporated you guys to my blogroll.

This is exactly what I was looking for!! How many yards of fleece do you think I would need to make this for my one year old? I'm a novice :)

Is it wrong I'm almost 40 and thinking of making this for myself...uh, my kids?

I love it! Thanks for posting.