Happy Birthdays to My Two

Today is Sage's birthday. My little, I mean medium-sized boy is 7. That's almost 10! And 10 is close to 13! He's practically a teenager! Okay, not really, but he's certainly lost all his toddlerness.

We had his party last week. It was a "water" themed party. Activities included swimming in the pool, dancing in the sprinkler, slip and slide, squirt guns, water balloons, a shark piñata, and this cake that I made him the night before: 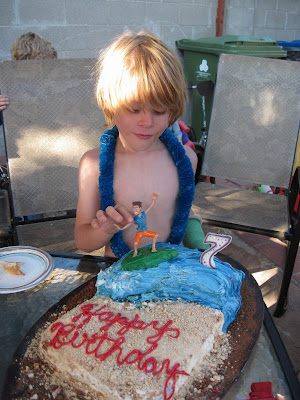 It's a surfer riding a wave into a graham cracker crumby shore. The 7 is actually an upside-down and slightly modified "2" candle from McKenna's cake 10 days earlier. Unfortunately she got a store-bought cake because I lamed out and we were away from home in Lake Arrowhead. She didn't mind, and I promise to go all out in the years to come. She hit the jackpot in Yo Gabba Gabba toys though - the Viking ship from her Aunt Cheryl and Uncle Theo, the walkie talkies from her Grammy and Pop Pop, and the D.J. Lance hat and glasses from us. 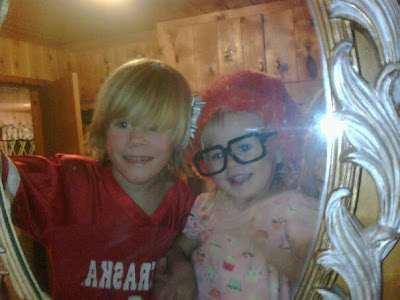 Being young sure is fun. Happy birthdays young'uns.
Posted by KB at 9:41 PM 60 comments

A few weeks ago, a call went out for swag bag submissions for the L.A. premiere of Handmade Nation. Surely you've heard of Handmade Nation by now - the indie documentary by Faythe Levine all about the recent resurgence of crafting in America. If you aren't lucky enough to live in a city that's hosting a viewing, it will be available this fall through buyolympia.com. Get it! It's sure to be a craft cult classic.

Living in L.A., I've had numerous opportunities to contribute to celebrity swag bags and have always declined. 50 toddler sundresses in exchange for "great celebrity exposure for kokoleo"? No thanks. I'd rather be obscure. But 200 contributions for the craft community? Sure! Here's what I made: 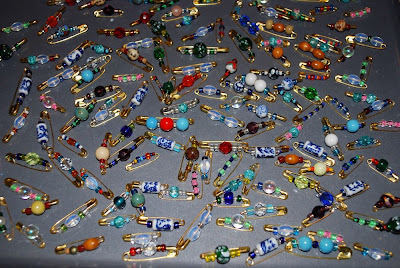 Friendship pins! Remember those? It was an early 80s fad. We swapped them with our friends and wore them attached to our shoelaces. It was a sweet and simple crafty gesture and I want it to make a comeback. I spent two nights putting beads on safety pins, then attaching them to my business cards. 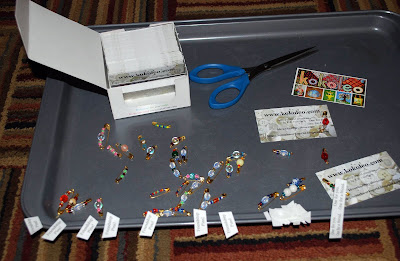 Two per card, labeled, "Friendship Pins!"
"One for you. One for a friend." 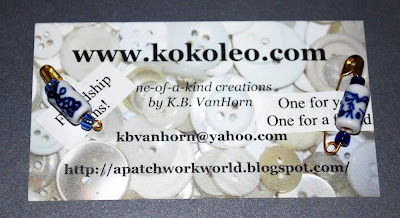 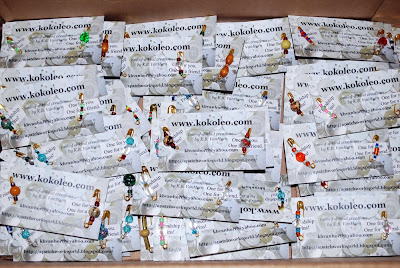 Now I need to get them out across the country, so the first 3 people to leave a comment will get a set. I'll email you soon and send some your way. To quote (kinda) an 80s sitcom theme song... You will see a little gift will be from me and the card attached will say, Thank you for being a friend.
Posted by KB at 12:00 PM 16 comments

Let's see, what else have we done this summer? I said I'd talk about Comic-Con, but I really don't have much to say. I wasn't in a very good mood the day we went there, as evidenced in this self portrait I took on the escalator. 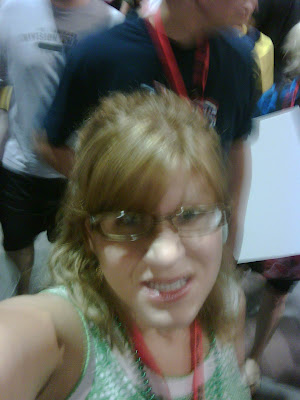 I'm just not all that into comic books and sci-fi stuff. There I said it. While there were some nice indie artists on the outskirts, it was mostly very commercial - major motion pictures I don't want to see and cartoon characters you see everywhere, plus dinky useless giveaways that later littered the sidewalks. Ugh. But that's just my perspective. There were thousands of other people thinking completely differently. My one ray of sunshine was getting my picture taken with Brobee from Yo Gabba Gabba: 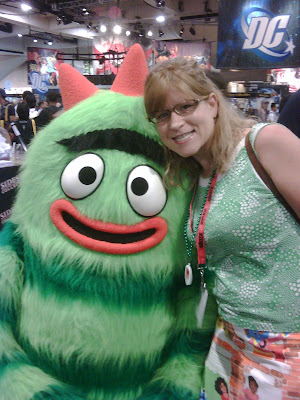 (Sage was off with Erik and McKenna was in the convention center daycare. I don't want you to think I pushed my kids out of the way to get to Brobee.)

The signs around the Gas lamp District in San Diego said, "Comic-Con: Celebrating the Popular Arts." I think I prefer the underground arts - the undiscovered one-of-a-kinds being made all over the world not for the purpose of getting Popular, but because someone just wanted to make something new. I guess you could say all those characters and movie scripts started out that way, but then they went and got manufactured for the masses. That changes everything.

Luckily we spent most of our San Diego trip exploring the city: 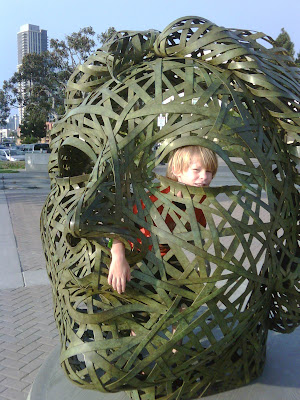 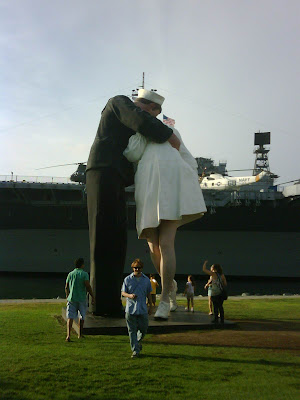 And visiting the museums at Balboa Park. My favorite was the Mingei International Museum and the exhibit they had entitled “Masters of Mid-Century California Modernism”: composed of work by or influenced by Evelyn and Jerome Ackerman of ERA Industries which operated in the 1950s-1980s. They and their handmade artisans (weavers, tile makers, silkscreeners) produced mod home decor for the masses and their style has had a major yet quiet influence on a lot of design and decor that's followed (IKEA, etc.). I found an article on them in American Craft Magazine online. They were a creative couple making the popular art of their day. If I ever become popluar, I wanna do it that way.
Posted by KB at 1:17 AM 2 comments

We all know that excessive juice box use is wasteful, but sometimes they come in handy. Like in lunchboxes or purses or hiking backpacks or cars. Sometimes though, they lose their straws and then you have to drink out of the hole, which is awkward. So, what do you do when your juice boxes/pouches have lost their straws and you also coincidentally happen to be out of popsicles? Make juicebox popsicles! Just cut a hole in the top, insert some chopsticks, and stick them in the freezer. 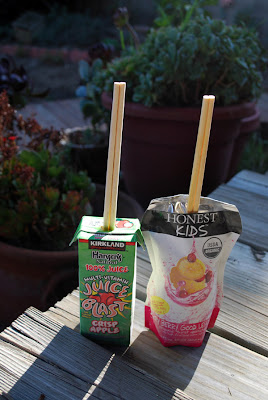 After they're rock solid, cut off the outside and Viola! Gigantic juice pops. 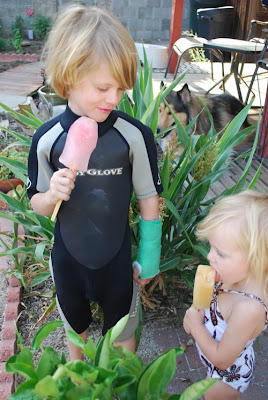 Email ThisBlogThis!Share to TwitterShare to FacebookShare to Pinterest
Labels: tutorial

Ahhh, August... the month of my kids' birthdays, the last month of summer, the month before I start my new job, the month a play I wrote will be performed a 2,653 miles away.

What? I haven't mentioned those last few things? I'm sure I will soon enough. When I go back and read through my blog entries I notice there's a lot I don't mention. You'd think, by reading my blog that life is fine and dandy in La-La land, that I spend my days exploring L.A., crafting away, and watching my children dance in glee around me. I tend to leave all the other parts out. Like how hard it is to live out here right now. Erik hasn't been able to find full-time work, our friends are getting laid off, our state is bankrupt, our house is worth half of what we paid for it and it's in a neighborhood I don't love . Those are bummer topics. So I try to focus on the good stuff. 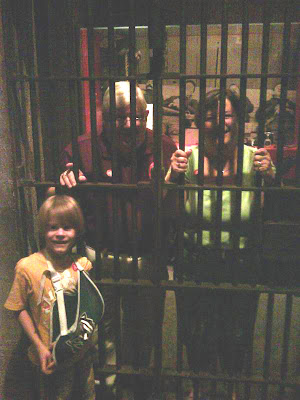 Just kidding! This was at the Autry National Center of the American West. We went there when my parents were visiting and my dad got to see all his cowboy heroes. It's a nice museum, even if country music and cowboys aren't your thing, it's still interesting. They have stuff for kids: 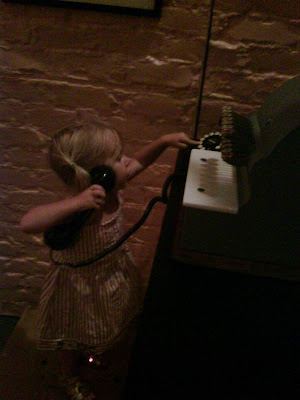 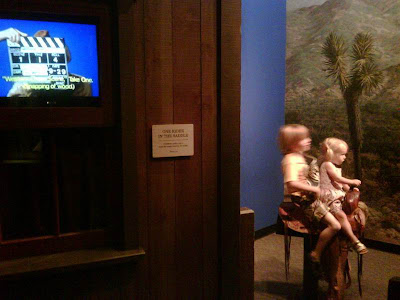 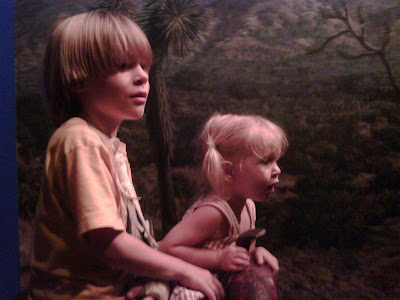 and stuff for people who are into wacky fabric and handicrafts: And life-size pictures of people who died before we were born: 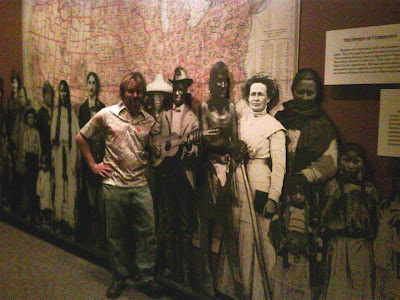 Pardon the crappy cell phone pictures. Our camera was broken for a month, yet another reason I haven't blogged. Let's see, what else have we done? We've swum. After 3 weeks Sage got a new waterproof cast, so the summer is not lost. 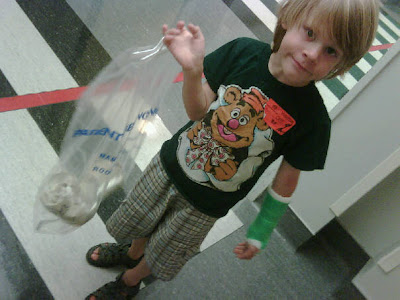 And I've been sewing up a storm, but I can't show any of it yet. Next blog post I'll show some of our San Diego/ Comic-Con trip we took a couple weekends ago. I've got some catching up to do!
Posted by KB at 12:19 AM 2 comments